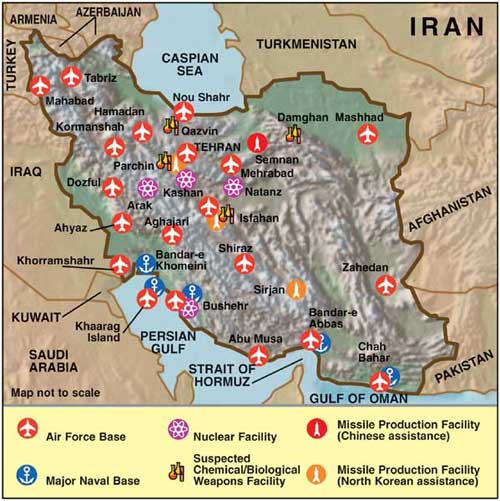 Enduring stability has eluded Iran ever since British Petroleum discovered oil at Majid Solemyan in the country in 1908. It completely transformed the society and polity in the country. The invention of the internal combustion engine engendered the geo-political metamorphosis of Iran and other countries in the Gulf region. In fact it was oil that delayed the independence of countries like Kuwait, UAE and Qatar. They achieved independence only in the later half of the 20th century. Most of these countries owe their status as a state due to petroleum.

Initially, the revenues generated by oil were shared between British Petroleum and the Iranian Government. Attempts to nationalise the oil industry in the early ’50s were met with a vicious reaction from the world powers. In the early ’50s the CIA and British intelligence had colluded with the Shah to overthrow Prime Minister Mossadeq, a step which was ascribed to the latter’s decision to nationalise Iran’s oil industry.

Oil constitutes the backbone of Iran’s economy. It accounts for more than 90 per cent of its export revenues, yet Iran continues to grapple with underdevelopment.

Oil constitutes the backbone of Iran’s economy. It accounts for more than 90 per cent of its export revenues, yet Iran continues to grapple with underdevelopment. It produces 3.6 million barrels of oil a day. It consumes half of it domestically. The earnings generated by the surplus have failed to improve the living standards of the people of Iran. The country’s population has doubled within the two decades following the revolution. There has been a sharp decrease in per capita GDP i.e. from US $ 22,000 to US $ 6,800 during the period. Iran’s nearly complete dependence on oil could turn out to be its nemesis. Unlike other countries in the region like Saudi Arabia, Iran is not primarily a desert country.

Moreover, it is quite self-sufficient in mineral resources like coal, copper, iron ore, and chromium. The Shah regime had provided impetus to the diversification of the economy by setting up other industries. However, this regressed in the post revolution era, and could be attributed to the Iran-Iraq War and international sanctions. Important industries like those related to textiles, food processing, automobiles and cement could only meet internal demand. Lack of competition and smuggling has brought these industries to the brink of collapse. It is instructive that Turkey, which is devoid of petroleum, has been able to register higher export earnings than Iran.

Oil was in a way responsible for bringing western influence into Iran during the Quazar rule. Reza Shah further perpetuated it and it peaked during his son’s (Mohammad Reza Shah Pahlavi) regime from the ’50s to end ’70s. While Iranian urban society was becoming increasingly westernised, the increasing revenues from oil exports provided a massive impetus to arms purchases from the western countries, particularly the USA. At the time of the revolution, Iran could boast of a most sophisticated military arsenal including in-flight refuelling tankers.The Islamic revolution of 1979 brought about a completely opposite and a radical shift in culture and international orientation that Iran found difficult to absorb, which even today is far from settled. Such violent changes, which impinge on the very moorings of the people, have seldom contributed the task of nation building. After the revolution, Iran has made a complete switch-over for its defence needs from USA to countries like North Korea, China and Russia. The reorientation has extracted a heavy price in terms of professionalism and growth of the Armed Forces.

Iran is the only country in West Asia which has a direct interface with Europe, Central Asia, West Asia and South Asia. In a way Iran also constitutes an ideological border between the Christian and the Islamic world.

Religion has historically played an important role in the governance of Iran. Shia Islam was declared the state religion way back in the 15th century when the Safavid Dynasty ruled Iran. Ever since then, the clerics in Iran have had an influencing role during various dispensations except under the Shah’s rule. It was the marginalisation of the clerics over three decades of the Shah’s secular regime that laid the foundations of the Islamic revolution. What should have been an internal affair of Iran has disconcerted the world community due to the Islamic regime’s cardinal principle of exporting the revolution to other countries.

The popularity and stability of the regime can well be inferred from the fact that the government organisation has instruments like Council of Guardians and Islamic Revolutionary Guards Corps (Pasdaran). The latter is almost a parallel armed force enjoying greater proximity and trust of the dispensation than the regular Armed Forces. It is again a reflection of the lurking distrust in the regular Armed Forces that the Pasdaran has not only been allowed to develop its own Navy and Air Force components but has also been allowed to set up and run its own defence industries.

The evangelising nature of the Islamic regime in energy rich Iran, its advanced ballistic missile programme, its quest for nuclear weapons and above all its preeminent geo-strategic location in the Persian Gulf, combine to make an explosive mix. Our present day world is energy driven and there are no pauses in the quest for energy by both developed and developing countries. In the foreseeable future, therefore, Iran is likely to be engulfed by forces being spawned by international oil politics. Iraq is one such example.

Iran shares a 936 km border with Afghanistan, 35 km with Armenia, 611 km with Azerbaijan, 1,458 with Iraq, 909 km with Pakistan, 499 km with Turkey and 992 km with Turkmenistan. It has a 2,440 km coastline in the Persian Gulf and 740 km along the Caspian Sea. There can be no enduring solution to problems in Afghanistan and Iraq without taking Iran’s complementarity into account. Iran shares intricate ethnic and religious linkages in the areas contiguous to these countries.

After the revolution, Iran has made a complete switch-over for its defence needs from USA to countries like North Korea, China and Russia.

Iran is the only country in West Asia which has a direct interface with Europe, Central Asia, West Asia and South Asia. In a way Iran also constitutes an ideological border between the Christian and the Islamic world.

The geo-political instability in the Gulf region derives from the historic antipathy that exists between the Iranians on the northern shore and the Arabs on the southern. This antipathy is due to racial and linguistic differences, since Iranians are not of Arab extraction. Moreover, most Iranians are Shiite and most Gulf Arabs are Sunni Muslims.

Iran’s centrality and its commanding position in the Persian Gulf have always lent it geo-strategic importance through the history. Even before oil was discovered, Iran was important for Britain in the 18th and 19th century because of the trade route that passed through Iran’s territory and the Persian Gulf. The Russian monarchy eyed Iran because of its warm water ports and for the security and stability of the newly incorporated Central Asian region. In the beginning of the 20th century, Russia and Britain, as per an agreement, had divided Iran into two spheres of influence. While Russia had exclusive rights in the northern portion of Iran, the British rights extended to the south and southeast portion.

Iran is not only a major oil and gas producer in its own right but also finds itself in an excellent geographical position for oil and gas pipelines emanating from the Central Asian Republics and terminating at energy thirsty consumers in Europe.

Later, with the discovery of oil in 1908, the British influence became pervasive. This was also possible due to Russia’s preoccupation with the Bolshevik revolution. The geo-strategic importance and sensitivity of the Persian Gulf for both Iran and the US can be gauged from the fact that when Iran’s Islamic regime declared the Gulf a war zone, on the outbreak of the Iran-Iraq War, US President Jimmy Carter instituted moves to organise an international level force for the defence of the Strait of Hormuz.

The geo-strategic importance of Iran was underscored during World War II when it was forced to rescind its neutrality in favour of the Allies because its territory was crucial for war supplies to Russia, which had been invaded by Germany. Iran’s reluctance to give any such concession had drawn a hostile response from Britain and Russia whose troops invaded Iran. Consequently, Iran not only provided the logistics corridor but also became an ally of the Allied powers.

Iran is not only a major oil and gas producer in its own right but also finds itself in an excellent geographical position for oil and gas pipelines emanating from the Central Asian Republics and terminating at energy thirsty consumers in Europe. But for US pressure, this oil-pipeline network could have fructified by now. Iran has been India’s enduring trade partner and energy supplier. It is keen to boost its oil and gas exports to India by extending pipelines through Pakistan or the Arabian Sea.

Iran not only dominates the Strait of Hormuz, through which all shipping to the Gulf must pass but is also a major player in the energy rich Caspian Sea, along which it has a 740 km coastline.

After the revolution in 1979, Iran has emerged as one of the major centres and source of Shia Islam theology and ideology. Though it has been constrained, it has not given up its agenda of exporting the revolution. It has been candid about its support to the Palestinian struggle and other Islamic causes, however, there is nothing substantial to suggest its links with any terrorist organisation, although western insinuations are to the contrary. In the Gulf region, Iran has fairly strong Armed Forces and is way ahead in ballistic missile capabilities and possibly nuclear technology. These are dangerous tools in the hands of a regime that is revolutionary, relatively isolated and insecure.

More than anything else, it is the survival of the Islamic Regime that dominates the security perspective of present day Iran. In fact, all other considerations are predicated on this simple truism. The threats that have the potential to destabilise the Islamic Regime are :

The Islamic Regimes proximity to North Korea and China, especially with regard to nuclear and missile technology cooperation, is already a matter of great concern for its neighbours, Israel, the US and its western allies.

NATO, which earlier existed only on Iran’s northwestern flank by virtue of Turkey, has now extended its presence to Afghanistan i.e. on the southeastern flank of Iran. In Iran’s western flank i.e. Iraq and the Gulf countries, the US has a strong military presence. Strategically, therefore, Iran is hemmed in by powers that it considers as inimical. Iran has serious differences on maritime boundaries with Azerbaijan in the Caspian Sea, which is now being seen as a part of the US camp. At the present juncture, Iran appears to be strategically encircled. The insecurity of the Islamic regime is best evidenced by the ever-increasing accent on Pasdaran, which is almost a parallel armed force and the Council of Guardians, which is an extra constitutional authority.