5 Gorkha Rifles was originally raised as 25th Punjab Infantry or The Hazara Gorkha Battalion on 22 May 1858 at Abbotabad. Later rechristened as 5th Gorkha (Rifle) in 1891, the Regiment has since acquitted itself with a dazzling record of military victories, valour and array of awards not forgetting the unique feature of winning two VCs on a single day.

It is the only Regiment to have won nine VCs in the Great Wars and has 49 battle honours to its credit. It saw hard fought actions in the scorched deserts of Gallipoli and Mespotamia and rugged clime of Afghanistan during the First World War with an enviable martial account. 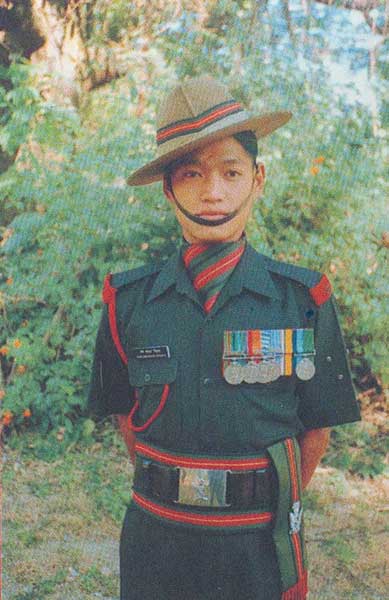 The British conferred the title ‘Royal’ on the Regiment in 1921 in recognition of its superlative combat services in the World Great War. The Second World War too bore the testimony of sustained military glories with the ‘Fighting Fifth’ fighting their way through Iraq, Iran, Palestine, Italy, Lebanon, Burma, Java, Malaya and Siam.

In the post independence era, the battalions of the Regiment continued with their forays in all the wars with elan and heroism now typical to the Regiment. In the Hyderabad action the Regiment claimed one Ashok Chakra. Zojila pass was captured paving the way for link up with Leh in 1948 and Dera Baba Nanak Bridge was captured in 1965.

The 1971 war with Pakistan yet again endorsed the stoic resilience and fortitude of the Regiment when a battalion executed the first ever helibrone operations well behind the enemy lines, where it fought one of the fiercest battles in Sylhet.

Concurrently, another battalion captured ‘Sehjra Bridge’ in Bangladesh. On the Western frontier infiltration was undertaken in the Chicken Neck Sector with a masterly technique that completely surprised the enemy. The Regiment was honoured with 4 MVCs together with 5 Battle Honours. In Sri Lanka the Regiment earned one MVC and two VrCs. 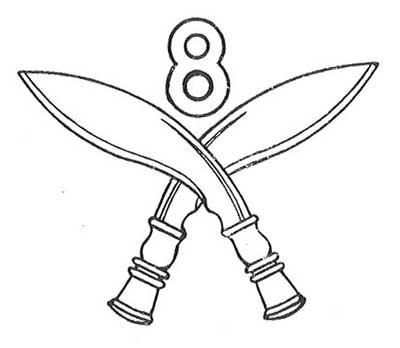 The Shiny Eight, popularly known in the Gorkha fraternity of the Indian Army, finds its roots of lineage to 16 Sylhet Local Battalion raised in 1824 and since then the identity of the Regiment has undergone transitions over the period to its present designation as the Eight Gorkha Rifles in 1907. The chronicles of the Regiment, spanning 176 glorious years, are replete with astonishing tales of heroism, guts and sacrifice. Little wonder that the Regiment has acquired an enviably long tally of 56 Battle Honours, 4 VCs, 1 PVC and 4 ACs. 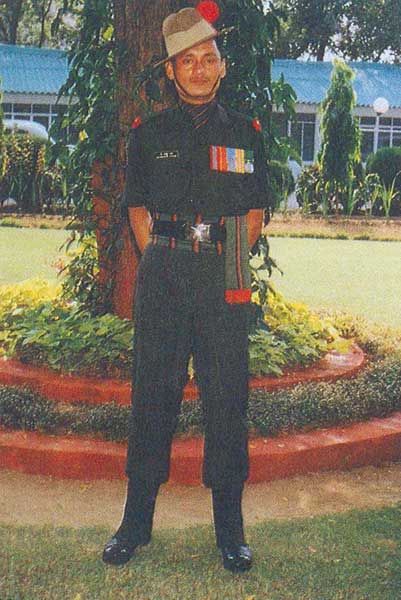 The first VC came to the Regiment in October 1879 in its first ever operational mission when its units were summoned to deal with Naga rebels. This was the first time that a regular army unit was ever employed in the Naga Hills. The Young Husband Expedition of 1904 was another jewel in the crown that brought VC again to the Regiment. Braving the high altitude climes of Tibet, the expeditionary force successfully stormed through the Tibetan fortress of Gyantse at 19000 feet.

World War I testified the enigmatic valour and heroism of the Regiment during the course of combat services in Italy, France, Mesopotamia and Egypt. 15 battle honours were earned during the period. 8 GR battalions also saw active overseas actions in Iraq. Egypt, Libya, Tobruk, EI Alamein and Burma during World War II where the Regiment earned one VC and 22 Battle Honours.

Soon after partition, the First battalion saw action in the J&K operations of 1948. When the Pakistanis were all out to seize Kashmir by brute force, Lt Col Hari Chand with a handful of men marched on an unconventional route from Kulu to Leh at an altitude of 18,000 ft and destroyed enemy guns, which forced them to withdraw from this sector and saved Leh from falling into enemy hands.

For this dauntless and gallant action, Lt Col Hari Chand was awarded Maha Vir Chakra. In the Chinese aggression of October 1962, Maj Dhan Singh Thapa, earned laurels for the Regiment while defending Pangong Lake (Ladakh Sector) with ferocious tenacity and held on magnificently against Chinese human wave attacks. Maj Dhan Singh Thapa was honoured with the PVC for his steadfastness and valour in this operation.

The Regiment also exhibited sterling combat performances during 1965 and 1971 Indo-Pak conflicts during which 4 MVes and Battle Honours came its way. The Regiment was also actively involved in the operations in Sri Lanka and brought home one MVC and four VrCs. The 7th Battalion was raised on 1 July 1979 at Shillong, consequent to the 15t Battalion becoming Mechanised.

Field Marshal SHFJ Manekshaw, MC, is the most celebrated personality of the Regiment. His contribution in the Indo-Pak War of 1971 is now a legend in the military history of the Indian Armed Forces.

The history of the 9 Gorkha Rifles dates back to 181 7, when it was raised as Infantry Levy at Fatehgarh. In 1823, it became a regular unit as part of the Bengal Native Infantry. After the reorganisations post-1857, the designation was changed to 9 Bengal Native Infantry with one of its companies formed by Gorkhas and other hillmen. 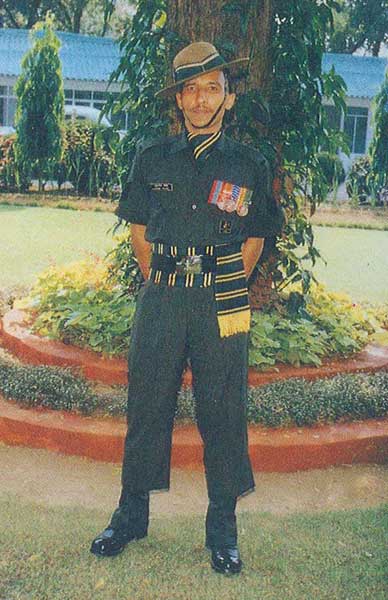 By then the Regiment had fought at Bharatpur, and in the difficult battle of Sobraon in the Anglo Sikh War. In 1893, the Regiment became a wholly Gorkha unit of Khas Gorkhas, ie; those who were more closely linked to Hindu ways as compared to the Budhist ways of other Gorkha clans. In 1901, the Regiment was designated 9 Gorkha Rifles.

9 GR fought in the Great War in Europe and in the inter-war years took part in the operations in the North West Frontier. In World War II, it fought in Italy and North Africa.

The 3rd and 4th Battalions formed part of the Chindits in Burma, and earned a high reputation in Long Range Penetration operations.

In 1962, 1/9 GR fought under the most demanding conditions on Namka Chu in NEFA (Arunachal Pradesh).

The Regiment continued the fine traditions in 1965 and 1971, and earned Battle Honours and gallantry awards.

The Regiment recruits the Chhetries, Khattries, and Thakuries from Nepal. Domiciled Indian Gorkhas are also taken, who form about 20 percent of the strength. The Regimental Centre is at Varanasi, Uttar Pradesh.

First Raising. The history of 11th Gorkha Rifles in fact dates back to the year 1918. Four battalions were raised in Mesopotamia and Palestine in May 1918 by pooling companies from other Gorkha Regiments and Garhwal Rifles. These battalions also saw action in the Third Afghan War. The battalions were later demobilised from the Indian Army.

The Second Raising. At the time of Independence, when the division of the Indian Armed Forces was being done, the question of the future employment of Gorkha troops also came up. At that time there were ten Gorkha Regiments in the Indian Army, each with two battalions. To settle the issue the Govt of India, Nepal and Britain considered the matter and a Tripartite Agreement was signed on 9 November 1947. 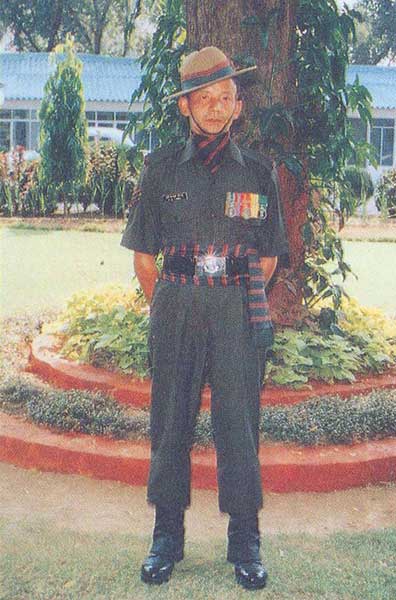 There was no Gorkha Regiment, left in the Indian Army with troops from Eastern Nepal. Keeping in min the large numbers of non-optees and their fighting qualities it was decided to re-raise the 11th Gorkha Rifles. Thus on 1 January 1948, the Regimental Centre and 3/11 GR (with strength from 2/7 GR) were raised at Palampur and Santa Cruz, Bombay, respectively.

In 1948, as the number of non-optees increased the Fourth and the Fifth were also raised. Later the First and the Second were raised on 1 September 1960 and 11 January 1963. The 107 Inf Bn (TA) Affiliated to the Regiment was raised on 1 October 1960. The Sixth and Seventh were raises after the 1962 Chinese invasion.

Battalions of the 11the Gorkha Rifles gave participated in practically all operations undertaken by the Indian Army since Independence, I.e. Hyderabad (1948), J&K, 1948, 1965, Chola (1967) where the seventh fought a gallant action against the Chinese in a localized border engagement and 1971.

The First and Second battalions of the Regiment have operated with distinction in anti-militant operations in Assam and J&K, respectively, and won unit citations with the COAS Scroll of Appreciation.