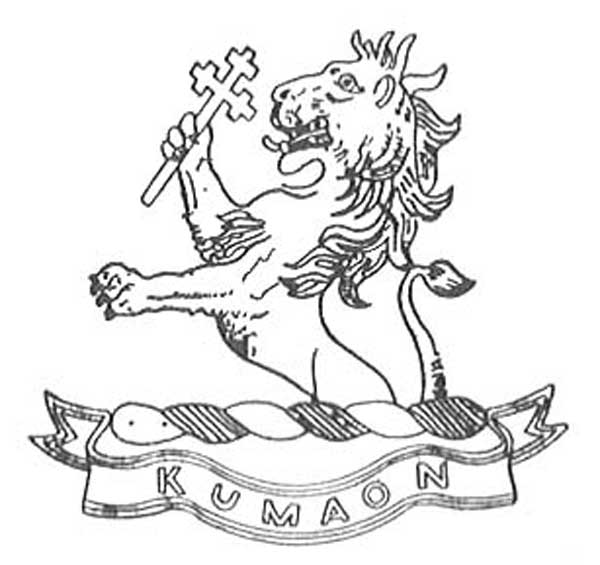 The Kumaonis, like the Garhwalis, had been in British military service since the early 19th Century. As part of the North Indian class, who had joined the military of the East India Company’s forces, the Kumaonis had moved to other states in search of military service. They thus formed part of the Hyderabad Contingent, which was raised, trained and led by British officers under Henry Russel, but paid by the Nizam of Hyderabad. 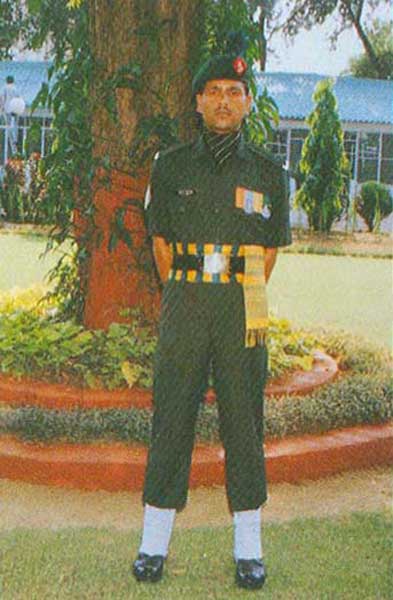 After 1857, in keeping with the class based composition of the infantry, the Regiment comprised Rajputs, Jats and Muslims. After the Great War, some Kumaoni battalions were raised separately, but the Hyderabadis continued and fought with distinction in the World War.

The muslim composition of the Hyderabadis had been discontinued in the mid-1920s.

The regimental insignia is the demi-rampant lion, which formed part of the arms of the Russel family, whose ancestor had started the body of troops now formed into Kumaon Regiment.

The class composition of the Regiment is 75 percent Kumaonis and 25 percent Ahirs/Rajputs. The Regimental Centre is at Ranikhet, Uttar Pradesh.

The Regiment was raised on 15 June 1941 to meet the claim by the then undivided State of Assam for its own fighting unit to counter the threat of the Japanese invasion of India. The young Regiment soon proved its capabilities within three years of its raising, at the consecutive battles of Jessami, the epic defence of Kohima and capture of Aradura, all of which were awarded as Battle Honours to the Regiment.

The Regiment earned high praise for its combat skills in World War II. After Independence, the Regiment gained in strength and its battalions have taken part in all wars and counter-insurgency operations with distinction. It was awarded a Battle Honour for its tenacious defence at Chamb (1971). 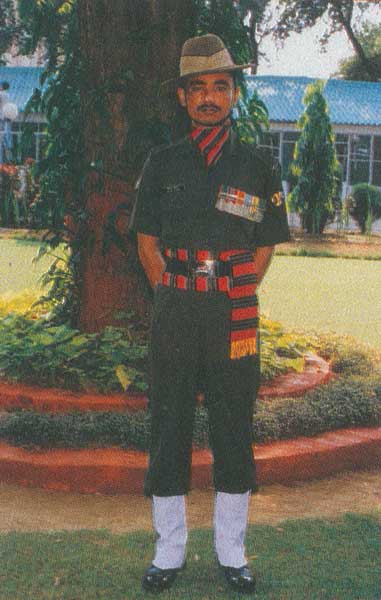 Two battalions were part of the Indian Peace Keeping Forces in Sri Lanka in t 988 and a battalion seNed in Cambodia in t 993 as part of the United Nations Transitional Authority in Cambodia. A Territorial Army battalion and a Rashtriya Rifles battalion are affiliated to the Regiment.

The class composition of the Regiment includes Nagas, Mizos, Assamese, tribes of Arunachal Pradesh and other North Easterf1 tribes.

Two battalions also have Dogras, Garhwalis, Gorkhas and South Indian classes. The unique cultural and tribal character of the Regiment makes for a fine combination of cheerful, tough and willing soldiers who excel in’ 9perations in mountainous and jungle terrain.

The Regimental insignia is the uni-horned Rhinoceros of Assam.

The Regiment colours are Black and Gold (State colours of undivided Assam) and Scarlet (the colour of the Infantry).

Badges of rank are Silver and Black. The side arm is the ‘dah’. Its Regimental language is Hindi. The Regimental Centre is at Shillong. 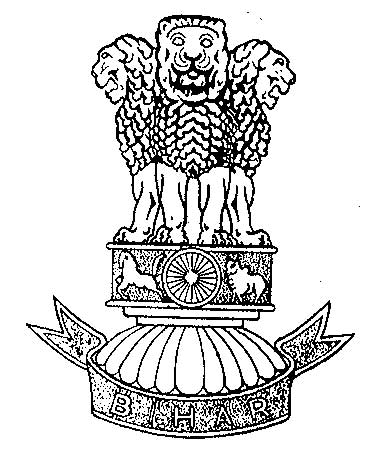 Bihar is the cradle of ancient Indian civilisations and empires. Hindu, Budhist and Muslim influences intermingled to produce a soldiery which was traditionally arms bearing, disciplined and deeply religious.

The Bihar Regiment claims its origins from the sepoy battalions raised in 1758 by Clive at Patna. These were formed by the men from the Bbojpur region of Bihar. Their success in combat had impressed the local ruler Mir Kasim, to begin raising units trained in western combat techniques. 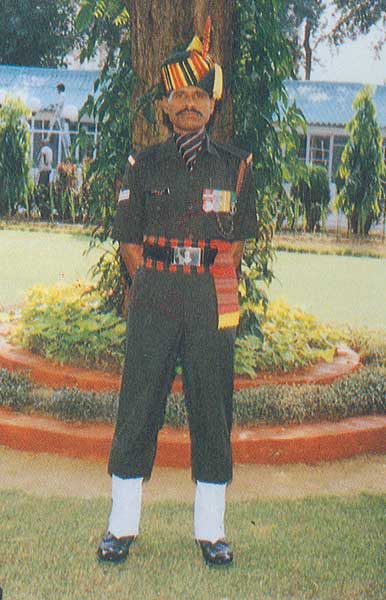 The Bihari battalions raised by Mir Kasim had not only done well, but beaten the British in some engagements. The Bihari, of, poorbiaj purviah soldier thereafter continued to provide the backbone of the Bengal Infantry of the British.

The Bihari – particularly the Brahman – was not only an excellent soldier, he was also quick to learn and apply the tactical drills with initiative. He was disciplined when led by good officers, but capable of hostility when his beliefs and customs were disregarded.

The 1857 revolt against the introduction of greased cartridges, was led by the Bihari troops, who preferred being blown by the guns to losing their faith.

Biharis thereafter were not encouraged to enter military service until after the Great War, when they were accepted in the Hyderabad Regiment which later became the Kumaon regiment. 1st Bihar Battalion owes its origins to the Kumaonis. The 2nd was raised in 1942 as part of the Bihar Regiment. 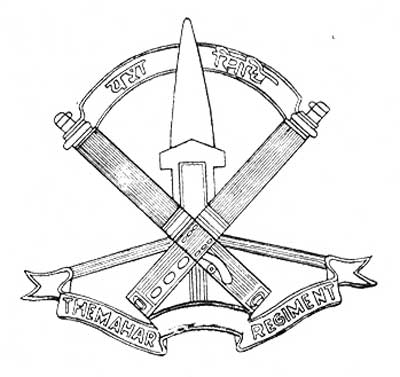 Mahars have a long and proud tradition of bearing arms. They were the respected members of Shivaji’s and later of the Maratha armies. After the British trained and drilled Indian Infantry was formed in the early 19th Century, Mahars formed part of the Bombay Presidency Army. They had particularly distinguished themselves in the battle for the defence of Koregaon in 1818.

A Mahar battalion was raised in 191 7 and took part in the Great War, but was later merged with another regiment. Between the two wars, the Mahars .had persistently sought a regiment for themselves for service in the army. These efforts, marked by the quality and level of arguments advanced by the Mahar leader, Dr BR Ambedkar, resulted in the Mahar Regiment being raised in 1941. 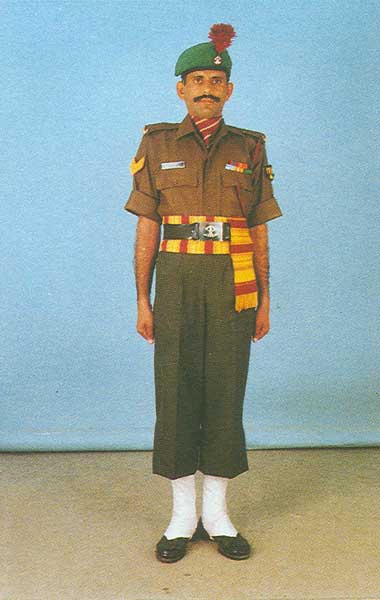 The Regiment fought in Burma, Persia and Iraq in the World War. In 1946, the Regiment converted to the specialist role of fielding medium machine guns, and for a decade and a half rendered most effective support in combat.

The men carried the heavy weapons in every terrain and never failed to hold their ground in defence.

During the disturbed conditions in the aftermath of partition, the Regiment helped in the safe transfer of lakhs of refugees, in the face of violent armed mobs.

In 1956, the Regiment absorbed three battalions of the Border Scouts, which had been earlier raised for manning the disturbed Punjab border. The class composition of the Regiment changed over the years, to accept men from all states and classes while retaining basic Mahar composition in some battalions.

The regimental insignia is a pair of crossed Vickers medium machine guns with a dagger.

The regiment motto is Yash Sidhi (Success &. Attainment). The Regimental Centre is at Saugor, Madhya Pradesh.

The J&K Rifles is a unique Indian Regiment.

It is a historic Regiment (dating back to 1821) that was not raised by the British but by an intrepid Indian ruler called Gulab Singh.

Gulab Singh was one of the ablest Generals of Maharaja Ranjit Singh and later became the rule of the Jammu and Kashmie State. He and his legendary General Zorawar Sing led many spectacular campaigns to add Ladakh, Baltistan, Hunza and Skardu to the State territories. 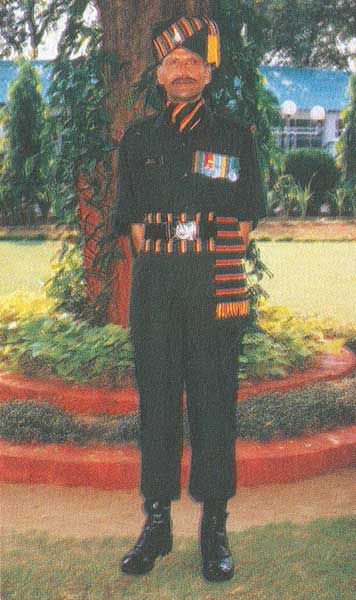 Zorawar Singh mounted a breath-taking invasion of Tibet in 1841. The stat force fought as imperial Service troops in both the World Wars (under their own native officer). They distinguished themselves in East Africa, Palestine and Burma.

Their grimmest hour came in the 1947-48 Pakistani invasion of Kashmier. It was their heroic stand that gained time for the entry of the Indian Army and thus saved the Vale of Kashmir. They paid a steep price in blood and sacrificed over 76 officers, 31 JCOs and 1,085 Other Ranks. For their gallant stand they earned three Maha Vir Chakras, 20 Vir Chakras and 52 Mentioned in Despatches.

The J&K State Forces are the only erstwhile Princely State Forces of India to be aborbed en bloc into the Indian Army as a distinct and sparate Regiment. In 1963, the designation was changed to Jammu and Kashmier Rifles. After conversion, the Ladakh Scouts came under the aegis of the Regiment.

During the recent Kargil conflict, they created an unprecedented record of sorts, when 18 J&K Rifles won tow Param Vir Chakras in a single campaign. Ladakh Scouts has recently acquired the status of a Regiment.

The Regiment has a class composition of 75 percent Dogras with Gorkhas, Sikhs and Muslims forming the other 25 percent. The Regimental insignia is an oval around the stat emblem of the sun. The Regimental matto is Prashasta Ranvirta (Valur in War is praise worthy) The Regimental Centre is at Jabalpur, Madhya Pradesh.