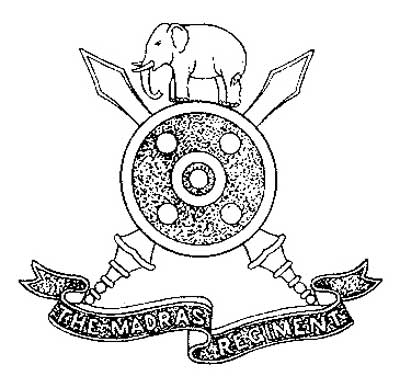 The Madras Regiment today stands firmly and proudly on the deep rooted foundation of valour and sacrifice displayed by the warriors of South India. The four great Kingdoms of Chalukyas, Cholas, Pandiyas and Cheras ruled various parts of South India till the end of 9th Century AD. Medieval India saw the rise of the Cholas whose empire extended from West Bengal in the east to south of Bombay in the west and covering the entire South India less the Cheras in Travancore and encompassing the islands of Sri Lanka, Malaysia, Cambodia and Sumatra. The soldiers of the Madras Regiment are the descendants of the Pallavas, Cholas’ Pandiyas, Telugus and Cheras whose history of valour is unparalleled.

The origin of the Madras Regiment in Its present form can be traced to the occasion when the levies were organised into companies of 100 men each, and two battalions were thus raised on 4 December 1758 and placed under Command Colonel (later Lord) Robert Clive to defend Fort St George at Madras. Thus, the Madras Regiment became the oldest element of Indian Infantry. The number of battalions of the Regiment soon increased to a maximum of 52 battalions in 1826. 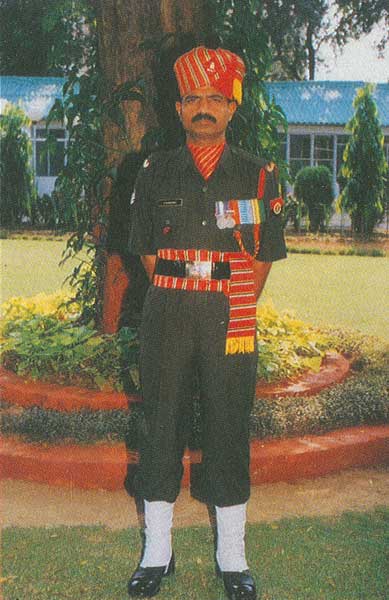 In a significant event, influencing the turn of history, the Madras Native Infantry spearheaded the storming of Seringapatnam Fort in the Fourth Mysore War in 1799. On 23 September 1803, the Madras army under Marquise Wellesely defeated the Peshwa army at a place called Assaye and won the acclaim of all. In recognition of the fierce fighting capabilities displayed during the battle of Assaye, the insignia of an Assaye Elephant was awarded to the Madras Native Infantry and the same is worn on the belt by all ranks of the Regiment to this day.

After independence, the Infantry battalions of Travancore, Cochin and Mysore State force were amalgamated into the Madras Regiment. 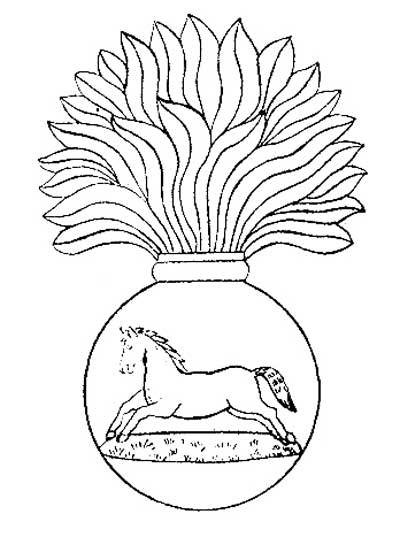 The concept of ‘Grenadiers’ evolved from the practice of selecting the bravest and strongest men for the most dangerous tasks in combat. The Grenadiers have one of the longest unbroken records of existence in the Indian Army. 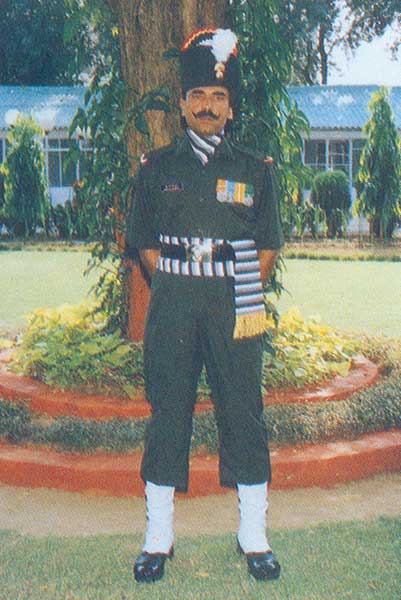 The motto of the regiment is ‘Sarvada Shaktishali‘ or Ever Powerful.

The Regimental Centre is at Jabalpur, Madhya Pradesh. 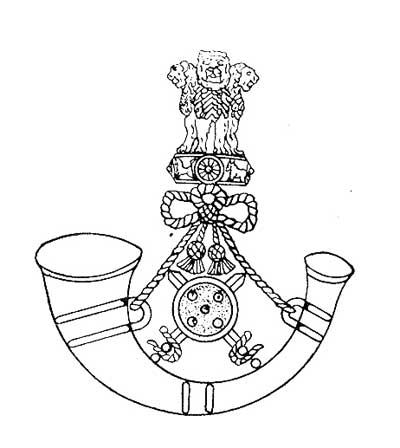 The Maratha military qualities were brilliantly optimised in their historic campaigns against the Mughals and the British, under the leadership of Shivaji and succeeding rulers. Maratha armies, comprising both infantry and light cavalry with the Maratha naval power had dominated the military scene in India for three centuries.

One of the famous regiments of the Indian Army, the Maratha Light Infantry is also one of the oldest. Its First battalion, also known as the Jangi Paltan, was raised in 1768 as part of the Bomay Sepoys. The Second battalion had earned the sobriquet of Kali Panchwin. 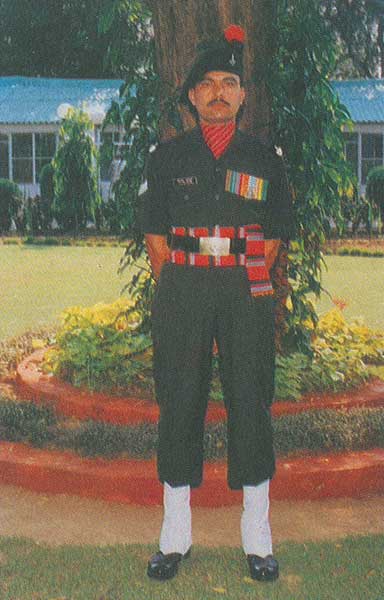 The Marathas came to special attention in the Great War and have maintained a record of dependability in war and peace.

The class composition of the Regiment is primarily formed by the hardy, frugal, and disciplined people form the former Maratha Empire. The men are drawn from the State of Maharashtra with some percentage from the Marathi speaking areas of Karnataka including Coorg. The Regiment also recruits Muslims from the recruiting areas. The Regimental Centre is at Belgaum, Karnataka.

The quick moving Marathas with their traditions of mountain warfare were ideally suited to and were formed into a light infantry regiment. The Regimental insignia is a bugle and cords with a pair of crossed swords and a shield. They chose the bugle for their insignia, as it best represented the light infantry mode of combat by skirmishers, controlled by orders issued on the bugles. The Regiment were the insignia with a red and green hackle. 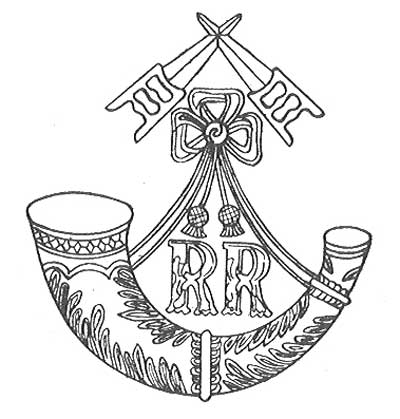 The Rajputana Rifles is the senior most Rifle Regiment of the Indian Army. Its first battalion was raised as far back as in January 1775, as it stands today was formed in 1921-22 during general re-organisation of the Indian army. the following battalion of Bomaby and Bengal Army were grouped together to form the sixth group, the Rajputana Rfiles:- 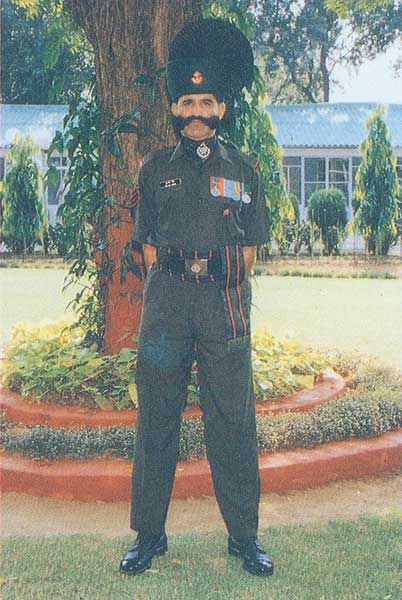 Each of these battali9ons had a long and glorious past. They have taken part in some of the bloodiest battles in many theatres of the world. Teh Rajputana Rifles has the unique honour of having won the first Victoria Cross of the Indian Army in 1856. This was awarded to Captain John Augustus Wood of the 2nd Battalion in the Battle of Reshire in Persia.

During World War II, the battalion of this Regiment fought in every theatre in which the Indian Army was involved. Three of them, the 1st, 4th and medium Machine Gune Battalion fought in Eritrea in North Africa and Italy as part of the famous 4th Indian Division, whose fighting record was among the finest in World War II. It was in the fighting in Keren in Eritrea that Sub Richpal Ram of the 4th Battalion won a Victoria Cross (Posthumous), the first VC of the Battalion and that of the Division in World War II. The second Victoria Cross of the Regiment, during World War II, was won by Company Havildar Major Chhelu Ram again of the 4th Battalion, at Djebel in Tunisia at the end of the North African Campaign. This battalion alone won nearly eighty gallantry awards including two Victoria Crosses in a five year campaign.

The outbreak of hostilities in Kashmir again saw the Rajputana Rifles in the thick of battle. Company Havildar Major Piru Singh of the 6th Battalion earned for the Regiment its first Param Vir Chakra at Tithwal. During the brief period of the Jammu and Kashmir operations the Regiment was awarded 1 PVC, 2 MVCs. 14 VrCs and 49 Mentioned-in-Despatches. In 1970, Captain Umed Singh Mahra of a young battalion the 19th, won for the Regiment its first Ashok Chakra in Counter Insurgency Operations. 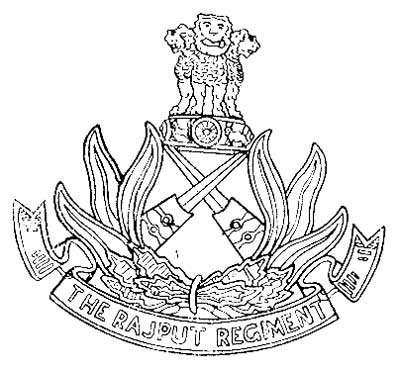 The men had loyally retained the Colours which had been shot to pieces in the earlier battles for the fort, and stitched it up again to raise it at the fort after it was taken. 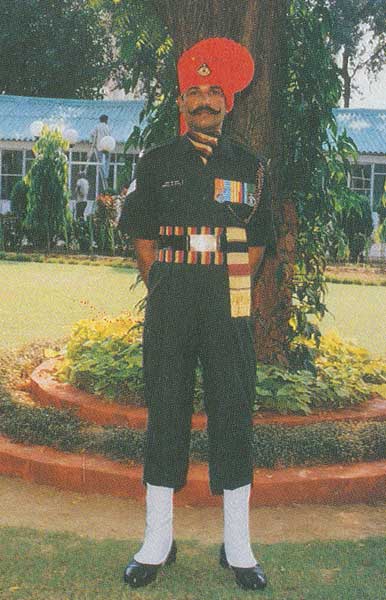 The regimental insignia is a pair of crossed Katars (Rajput daggers) flanked by three Ashok leaves on either side.

The regimental motto is Sarvatra Vijay, or, Victorious everywhere. The Regimental Centre is at fatehgarh in Uttar Pradesh.