The Indian civilization is a rich mosaic of many diverse ethnic groups and cultures, a Rainbow Coalition. Waves of successive emigrations from the Central Asian heartland to the rich alluvial plains of India created this melting pot of many cultures and ethnic groups. The Indian Army is a microcosm that faithfully represents the rich and vibrant diversity of the Indian macrocosm. India can boast of many fighting ethnic groups who have thousands of years of soldiering behind them. Some of the ethnic groups found in our Regiments today were mentioned in the epic Mahabharata some 3500 years ago. The Mahabharata mentions the Dogratas and Tigratas (the Dogras of today) it mentions the soldiers of Mathura (Ahirs, Jats, Yadavas) and Maghada (Bihar). 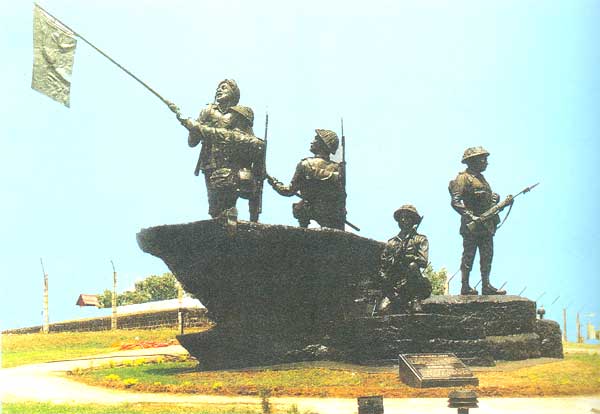 It also mentions Naga warriors (like Ghatotkach) and warriors from Kamrupa (Assam) who were experts in handling war elephants. The famed fighting ethnic groups like Dogras, Rajputs, Sikhs, Jats, Gorkhas, Garhwalis, Kumaonis, Biharis and Assamese were moulded by the British into the European Regimental system. Initially, the British Indian units did their own recruitment. Then a mother or base depot was established to train and supply recruits. These metamorphosed into the Regimental Centres that today train and supply recruits to various battalions of the Regiment (that are generally serially numbered). Thus, depending upon the size of the Regiment, a Centre could feed from six to twenty battalions.

The Regimental Centre is the ‘alma mater’; it is the repository of its traditions, trophies and artifacts. The new recruit joins the Centre, becomes a trained soldier, takes his oath of loyalty and joins his Battalion. Some two decades later he returns to the Regimental Centre for his release and discharge drill. He goes back home as a retired soldier and pensioner. This unique Regimental system creates a mini ethno-universe of sorts – a cultural microcosm that faithfully replicates and preserves the cultural and ethnic background and context that the recruit comes from. It is the primary system of bonding for combat and creates an extended family system. It gives the recruit and young officer an identity and a deep sense of belonging. It forges the bonds of camaraderie and trust that see the soldier through the stress and trauma of combat.

The recruit is taught to die for the Izzat, the honour, of his Paltan and the Colours of his Rgiment. The central credos are ‘Nam’, ‘Namak’ and ‘Nishan’. Nam signifies the good name of the unit, Namak signifies fidelity to the salt and the oath the soldier takes, the Nishan is its sacred flag or emblem that can never be lowered on the battlefield. It must always flutter triumphantly. It is an amazing system for combat motivation and bonding. The Regimental system has stood the test o repeated wars and conflicts. 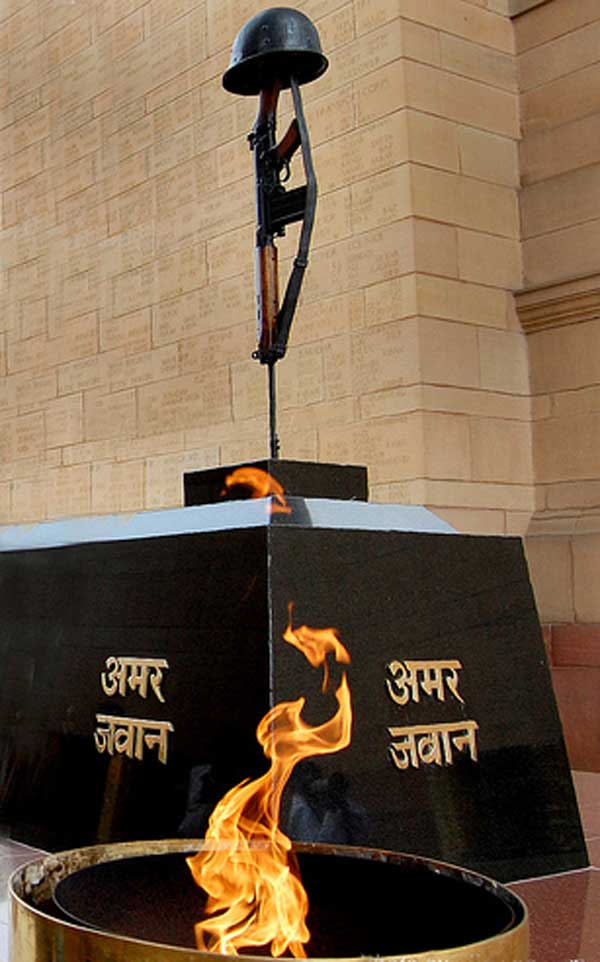 Indian Regiments have performed superbly in the first and Second World Wars in diverse battlefields over the whole world. Post-Independence they have kept up this sterling performance. The most recent test of the Regimental system came with Kargil and once again the sterling worth of the Indian Regimental system and the ethos it generates was proved beyond a shadow of doubt. The CNN, BBC, Star TV and other channels put martial India on telematic display for the whole world to see.

The Regimental system, in essence, is the primary basis for combat motivation in the Indian Army. It provides a sense of military identity – through unique and colourful uniforms and accoutrement – hackles, lanyards, cap badges and shoulder flashes and ornate turbans that tie the recruit to centuries of martial traditions of bravery and sacrifice as a way of life. Regiments have their Colours, their sacred Flags. They have their battle honours, their rich customs and traditions and rituals. Rituals tie us to our origins. These weave the skein of a distinct ethno identity dedicated to fostering combat bonds, cohesion and tremendous motivation.

On Republic Day the Indian Regiments present a carnival of colours, pomp and pageantry. Beyond these colours and ceremonials, however, lies a matchless system for combat bonding and combat motivation that has stood the test of time. This Rainbow of Regiments has served India very well in all her wars. These have become unique and immortal national institutions beyond compare. These must be nurtured and preserved. The Indian Army has three types of Regiments:-

From these simple organizational ingredients has been born a tremendous system of combat cohesion, combat bonding and combat motivation. Men do not sacrifice themselves in the battlefield for the pay they get. Many years ago Philip Mason had written “Men may come to the colours for pay, but it is not for the pay alone that they win the Victoria Cross”. The Regimental system motivates them to make the supreme sacrifice.

In the pages that follow, the colourful Regiments of the Indian Army are presented in brief outline.

The Brigade of the Guards 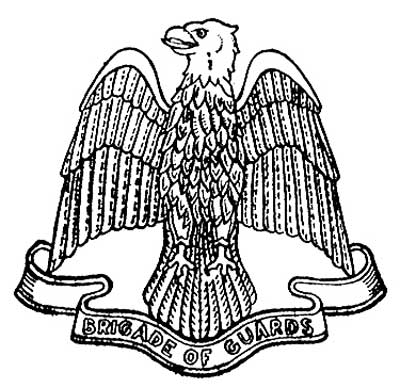 The first all class mixed regiment was raised in August 1949, by grouping the senior most battalions from four senior infantry regiments. The Regiment was accorded the senior position in the infantry and takes first rank in the arm.

Punjab, Grenadiers, Rajputana Rifles and Rajput Regiments provided the battalions that started the Brigade of the Guards. Succeeding battalions were raised by direct recruitment. Its battalions have formed part of United Nation forces in Gaza (Middle East) and Angola. 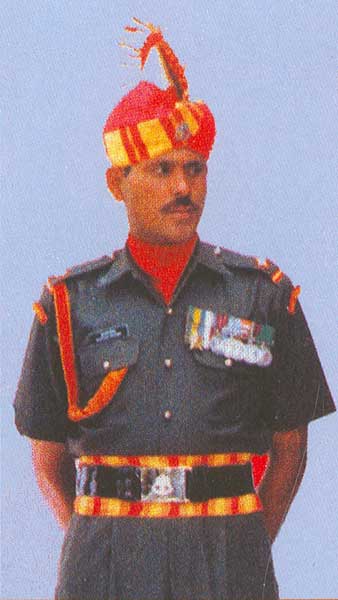 Guards have made a special name for themselves in the Indian Army, by their combat record and excellence in almost all fields of war and peace. The regimental insignia is the mythological eagle king, Garuda. The Regimental Centre is in Kamptee, near Nagpur, in Maharashtra.

The Chief of Army Staff is the Honorary Colonel, and President of India is the Colonel in Chief. 4 Guards Mechanised (1 Rajput) has the unique distinction of having an extra Junior Commissioned Officer on its establishment to carry the Honorary Colour (the only battalion in the entire Commonwealth awarded this honour for collective gallantry). 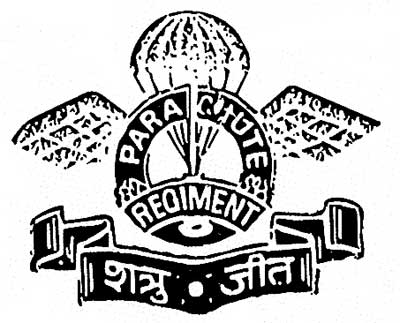 After Independence, in 1952, these specially trained Parachute Units from The Punjab, Maratha and Kumaon Regiments were transferred to the newly raised Parachute Regiment. These formed the 1 Para (1/2 Punjab) 2 Para (3 Maratha) and 3 Para (1 Kumaon). Subsequent to this, five Parachute Battalions and two Parachute (Commando) Battalions were raised. However, 8 Para was converted in 1976 and converted to 16 Mahar and later to 12 Mechanised Infantry. 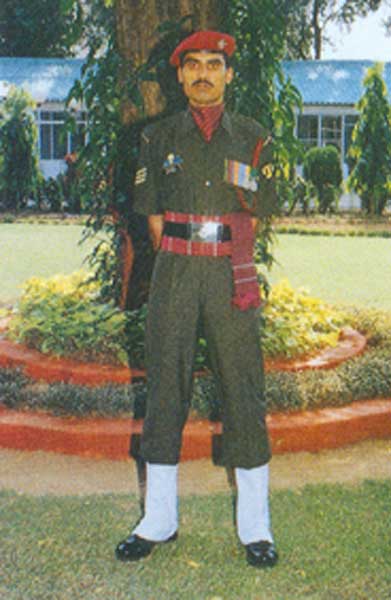 The Parachute Regiment undertook its first post-independence airborne operation when 2 Parachute battalion group was dropped near Tangail in Bangladesh on 11 December 1971 and was also the first unit of the Indian Army to enter Dhaka. The 9 and 10 Para Commandos proved their mettle in 1971 by conducting lightning raids in Mandhol (across Munawar Tawi) and in Chachro (Sind) respectively.

The Parachute Regiment took active part in the liberation of Goa in 1961 and in Operation Pawan (Sri Lanka) with nearly 80% of the Regiment deployed in the Island in 1987-89. 3 Para and 6 Para conducted air landed operations in aid of the Government of Maldives. The Parachute Battalions have in addition to their participation in other campaigns, formed part of United Nations Operations in Gaza and Korea. Today, the Parachute Regiment is perhaps the only Regiment to have taken part in every theatre and every operation in and outside the country.

As a recognition of its distinguished service, the Regiment was presented its new colours by the President on 6 Oct 1967. 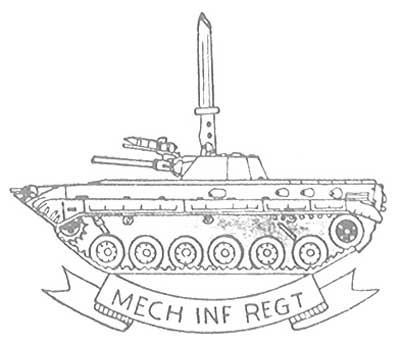 It is the youngest regiment of the -Indian Army and is a unique blend of military heritage originating since 1776 and the latest state of the art equipment profile. After 1965 Indo-Pak war, a need was felt to provide matching mobility to infantry units operating with armoured formations. In 1969 some of the oldest battalions from various infantry regiments were equipped with Armoured Personnel Carriers (APCs), TOPAZ, SKOT and BTR-60. These battalions remained affiliated with their erstwhile Infantry Regiments and Regimental Centres. 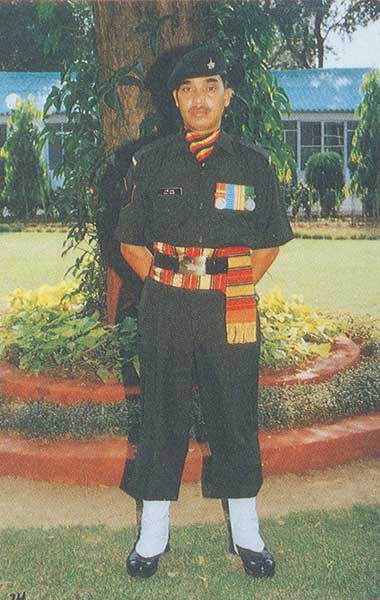 In 1977-78 Mechanised Infantry units were equipped with BMP-1 Infantry Combat Vehicles (lCVs). To fulfill the requirement of the common battle and training philosophy of mechanized warfare, the Mechanised Infantry Regiment was raised on 2 April 1979 and the affairs of the regiment were transferred from Directorate General of Infantry to Directorate General Mechanised Forces. The Regiment was raised and nurtured under the watchful eyes of its first Colonel of the Regiment, General K Sundarji, PVSM, ADC. New Battalions were raised by pooling in manpower from old battalions.

The Regimental crest is a rifle bayonet mounted on the’ BMP­1, depicting the infantry and mechanised facets of the Regiment. The President conferred Colours to the Regiment on 24 February 1988 at Mechanised Infantry Regiment~1 Centre (MIRe), Ahmednagar, in a unique parade where 14 Colours were laid down and 24 Colours presented. 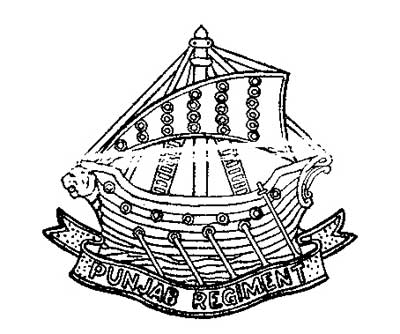 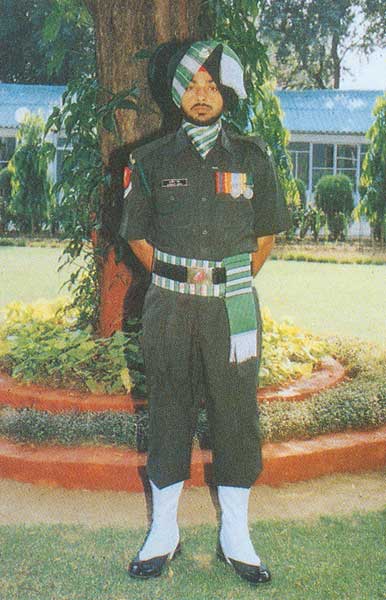 The Regimental Centre was first raised at Loralai and was shifted to Multan in 1922, Meerut in 1929 and its present location in Ramgarh, Bihar in 1976. In 1951, four battle experienced battalions of the former princely states of Punjab joined the Regiment. These were a battalion each from the Jind and Nabha States Forces and the First and Second Battalions of Patiala Infantry. They are now designated as the 13, 14, 15 and 16 Punjab. Additional battalions were raised since 1963. The class composition of the Regiment is Sikh and Dogras at 50 percent each. There are also other Indian classes from north India represented in .some battalions of the Regiment.

The Regiment insignia is a Galley, an ancient Greek or Roman warship with a bank of oars and sail. It is perhaps the only Infantry insignia of a naval vessel anywhere. It was awarded to the 69th Punjabis (later 2nd Battalion of 2nd Punjab Regiment) in recognition of the readiness to serve overseas, after the battalion had fought in eight overseas campaigns by 1824. In recent years the Punjab Regiment has contributed towards United Nations Peacekeeping Operations by sending two of its battalions overseas, ie in Gaza and Angola (3 and 14 Punjab, respectively). First and Second battalion of Punjab Regiment were chosen to form the elite 1 Parachute (Special Force) and 1 Guards, respectively. The motto of the Regiment is Sthal wa Jal, or, By Land and Sea. The Regimental Centre is at Ramgarh, Bihar.