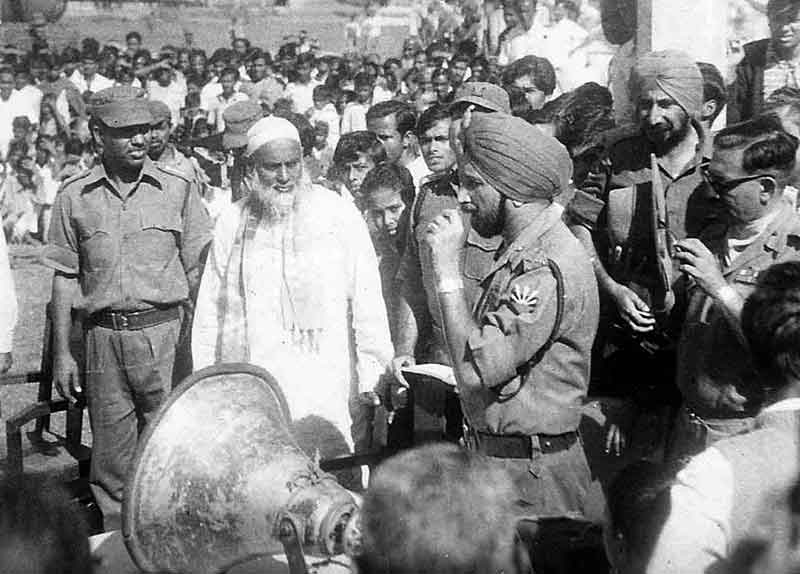 On the evening of 3 December, 1971, at about 5.40 PM, fighter aircraft of the Pakistan Air force (PAF) carried out a coordinated, pre-emptive air strike on Indian Air Force bases in Amritsar, Pathankot, Srinagar, Avantipur, Utterlai, Jodhpur, Ambala and Agra. The air strikes were supported by heavy Artillery shelling all along the border and a massive attack in the strategically important Chhamb sector of Jammu and Kashmir.

It became quite apparent that the Pakistani military leadership (General Yahya Khan and General Tikka Khan) and its vitriolic political leader, Zulfikar Ali Bhutto, had lost the battle of nerves and Pakistan had opted to initiate open hostilities. Quite obviously, the military objective was to garner a decisive tactical and strategic victory through the element of surprise.

Prime Minister Indira Gandhi, who was at that time in Calcutta, rushed back to Delhi and addressed the nation on radio. “I speak to you at a moment of grave peril to our country and our people. Some hours ago, soon after 5:30 P.M. on Dec. 3, Pakistan launched full‐scale war against us,” she said in her address. “I have no doubt that it is the united will of our people that this wanton and unprovoked aggression of Pakistan should be decisively and finally repelled. In this resolve, the Government is assured of the full and unflinching support of all political parties and every Indian citizen,” she added.

Thus started, formally, what is today known as the Indo-Pakistan War, 1971. It was to be, in the annals of military history of the sub-continent and the world, the shortest war to give such a  decisive victory, to the extent of carving out a new Nation – Bangladesh

The main reason behind the war was the horrifying persecution of the people of erstwhile East Pakistan (now Bangladesh) by the militarily more powerful West Pakistan. In the election held in Pakistan in 1970, the Sheikh Mujibur Rehman  led Awami League shocked Zulfikar Ali Bhutto and the military dictatorship of Pakistan by garnering 167 out of 169 seats in the East Pakistan Legislative Assembly and a near absolute majority in the 313 seat National Assembly. Mujibur Rehman had the mandate to govern the country, but this was not acceptable to the Punjabi centric military dictatorship and their stooge, Zulfikar Ali Bhutto.

Mujibur Rehman was arrested in West Pakistan and martial law imposed in East Pakistan.  Then commenced genocide of the worst kind marked by brutal atrocities committed on civilians,  especially Bengali Hindus including wanton killing, rape and torture. These hapless people fled to India in large numbers to escape the carnage. India opened her borders to save the refugees whose number soon swelled to almost ten million.

India sought international assistance to meet the huge refugee challenge and also to pressurise Pakistan into stopping the atrocity, but it did not come by. The Government was keen to open hostilities with Pakistan in the monsoon months itself but the proposal was shot down by the then Chief of Army Staff, General SHFJ (Sam) Manekshaw. He said that the rainy season was not suitable for campaigning in East Pakistan and also that the army needed some time to prepare for war.

General (later Field Marshal) Sam Manekshaw, went on to become a folklore for his firm and brilliant planning and conduct of the war. His actions were in keeping with the highest traditions and strategic requirements and thus gave to India a resounding victory.

As soon as hostilities commenced Prime Minister Gandhi recognised East Pakistan as an independent nation called Bangladesh and India got into a war on two fronts, east and west, with the Navy and Air Force also incorporated. The Indian Navy was quick to implement a blockade which disallowed supplies from West Pakistan to East Pakistan and the Indian Air Force soon established complete air superiority  over the East Pakistan skies.

On the western front, the war witnessed many battles where the Indian soldiers exhibited courage and fortitude in the face of great odds and came out victorious, albeit after great sacrifice. Primary among the battles fought in this sector is the Battle of Chhamb, Battle of Laungewala, Battle of Shakargarh Bulge, Battle of Basantar, Battle of Fazilka among many others . The exploits of Major (later Brigadier) Kuldip Singh Chandpuri and his men of 23 Punjab in Laungewala have been depicted in an epic Indian movie “Border.”

The conduct of the war was a true example of the synergized efforts of the Government and the Armed Forces with complete support of the people of the country. It was the support of the Nation that served as an elixir for the soldiers to attain success.

Bangladesh today is a proud, independent nation well on the path to development. Its rapidly improving economy and enduring democracy are its biggest assets. Its relationship with India is very good and improving rapidly. This freedom was won with great sacrifice. The role of the Indian army is providing to the people of Bangladesh the fruits of democracy and freedom is remarkable.

Due to the ignominious defeat suffered by Pakistan the evil policy to “bleeding India with a thousand cuts” was later formulated by the Pakistani Dictator, General Zia-ul-Haq, sometime in 1977. The basis of the policy lies in the conviction that Pakistan cannot beat India in a conventional war, so the best option is to resort to a Proxy War designed to weaken the fabric of Indian constitutional democracy from within.

Jammu and Kashmir, particularly the Kashmir Valley, was chosen as the main battlefield for application of this policy. It has failed miserably. Foreign sponsored terrorism that formed the fulcrum of the policy has been decimated by the Indian Army. The political environment has been stabilised with revocation of Article 370 and re-designation of the state as a Union territory.

It is hoped that Pakistan and its stooges will read the writing on the wall and understand that it cannot break the fabric of India by any means, fair or foul. No kind of warfare, be it conventional, proxy, asymmetric, kinetic, hybrid or anything else can fructify the evil, fundamentalist ambitions of some self serving powers based in Pakistan.