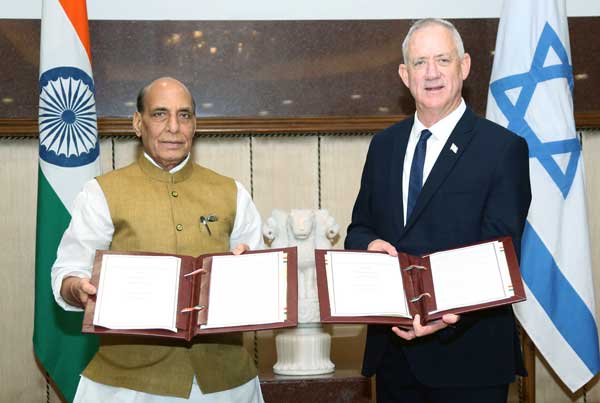 India and Israel on 30 May 2022 signed a ‘Vision Statement’ to further deepen the long-standing defence cooperation. This was adopted at a meeting between Defence Minister Rajnath Singh and his visiting Israeli counterpart Gantz.

“During his meeting with Prime Minister Modi, Gantz emphasized the opportunity to invest further in defence cooperation between the two countries, while building on shared values in order to contribute to global stability,” the Israeli Embassy said in a statement.

The discussions between the two leaders “covered topics including strategic global challenges, military cooperation, defence industrial cooperation and joint R&D” and a cooperation agreement signed between Defence Research and Development Organisation (DRDO) and Israel’s Directorate for Defense R&D, “which will enable the expansion of technological collaboration and development between the countries.”

The Israeli statement said that the ministers “declared their intention to further develop defence cooperation between the countries in a manner that harnesses Israel’s technological advance and operational experience, together with India’s extraordinary development and production capabilities.”

“Lastly, the ministers discussed partnerships within the government-to-government framework, military training, and technological cooperation with a focus on UAVs (unmanned aerial vehicles) and defensive capabilities,” the statement said.

“India is an industrial superpower and Israel is a technological superpower – cooperation between our countries will expand the capabilities of both countries to contend with developing challenges”, Gantz said.

“The two Ministers presented a joint declaration marking 30 years of Israel-India relations and reiterated their commitment to deepening defence ties,” a statement from Gantz’s office said. “India and Israel share similar and common challenges, including border security and fighting terrorism. By working together, we may increase our capabilities and ensure the security and economic interests of both countries,” Gantz said.A Letter of Intent (LoI) on enhancing cooperation in the field of futuristic defence technologies was also exchanged between the two Ministers.

The Ministers declared their intention to further develop defence cooperation in a manner that harnesses Israel’s “technological advance and operational experience”, together with India’s “extraordinary development and production capabilities”, the statement said. “Cooperation between the countries would be in line with Prime Minister Modi’s ‘Make in India’ vision.”

In addition, the Ministers discussed partnerships within the government-to-government framework, military training, and technological cooperation with a focus on Unmanned Aerial Vehicles (UAV) and defensive capabilities, the statement added.

He also met National Security Advisor Ajit Doval.“Discussed key issues pertaining to defence cooperation and global and regional scenarios during the bilateral meeting. We place great value on our strategic partnership with Israel,” Singh said on Twitter after the meeting. “There is a broad consensus between both the countries on further strengthening the bilateral strategic and defence cooperation.”

At the same meeting, it was also decided to form a Sub Working Groups (SWG) on defence industry cooperation and in this regard, a Terms of Reference was signed between the two sides. The SWG would enable efficient utilisation of bilateral resources, effective flow of technologies and sharing industrial capabilities, the Ministry had stated.

Israel has been one of India’s top defence partners supplying a range of high-end defence equipment. Indian armed forces rely heavily on Israeli Searcher and Heron UAVs to meet their surveillance requirements with growing need for more. In the backdrop of the standoff with China in eastern Ladakh, last year the Army had leased four Heron-TP Medium Altitude Long Endurance UAVs from Israel Aircraft Industries, which have since been inducted.

In the second half of last year, the Army also placed orders for smaller, expendable ‘Sky Striker drones to be manufactured in Bengaluru by a joint venture between Israel’s Elbit System and India’s Alpha Design Technologies, which is now part of Adani Group.

The two countries have several joint development projects in the pipeline, including the Long Range Surface-to-Air Missile also called Barak-8 for the Indian Navy’s warships. The development, which saw some delays, is now complete and the missile systems are being inducted.In another important project, in April, Hindustan Aeronautics Limited entered into a memorandum of understanding with IAI to convert six Boeing-767 civil passenger aircraft to midair refuelling aircraft in India for the Indian Air Force.

However, another major deal for two more Phalcon Airborne Warning And Control Systems (AWACS), to add to three in Service, has been stuck for a while for final approval from the Cabinet Committee on Security. With the current focus on indigenous manufacturing and DRDO now indigenously developing larger AWACS, the Phalcon is unlikely to materialise. The Army which has operated Israeli small arms for a long time had contracted 16,497 Negev Light Machine Guns from Israel in March 2020 under fast track procurement and they have since been inducted.