The RV has been flight tested before maiden flight of Agni-III28.

To test Agni-III with single new warhead requires a bigger RV body that can adapt with the large diameter motor. Compared to Agni-II this RV is shorter, more voluminous and 3.3 metre long. 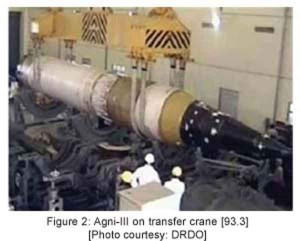 The large base diameter makes it unviable for high speed re-entry, thus this could be a payload adapter section that jettisons the real RV located in the front section. The high ‘²’ RV in combination with an all carbon composite body enables higher re-entry speed even with a light weight payload29.

This small RV allows compact MIRV configuration atop the Agni-III (Figure 8-F & Figure 10) reducing the missile length to bare minimum. Upto 3 MIRV’s (mounted inclined to reduce the overall height) can be accommodated in the nose with a protective nose cone that is jettisoned at ~90Km altitude.

A3 stage configuration Agni-3++ with the addition of a short third stage increases the range very significantly particularly with fewer MIRVs.

Enhancing the basic two stage design to eliminate the 1metre interstage, the Agni-3SL configuration (Figure 10) is short enough to make its way to submarine deployment. At 11.3 metre the overall missile length is submarine compatible and smaller than French M51.

One can see from above that Indian ballistic missile programme has steadily and methodically progressed to provide an affordable yet robust strategic deterrence commensurate with its national needs. With Agni-III the nuclear triad will be truly complete. The missile can be dispersed far and wide in the Indian mainland, it’s far flung islands or it’s blue water naval assets dispersed across the world’s oceans. The ability to reach all corners of a potential challenger, with MIRV and flexible range of between 5,000 to 16,000 km.