As the missile descends further the atmosphere density increases and the drag rapidly rises, also a very strong shockwave builds at the leading edge increasing the local tip temperature well beyond 3,000º C. 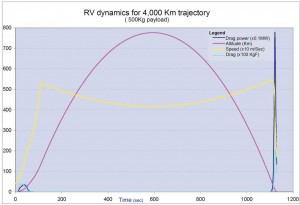 Tremendous dynamic pressure builds along the RV body creating drag that dissipates kinetic energy at the rate of 30 – 220 megawatt.

The Agni-TD’s RV-Mk.1 nose tip is made of a multi-directionally woven, reinforced carbon-carbon fiber composite material. The 0.8 metre diameter (1.0 m flare skirt) and ~4 metre long, reentry vehicle consists of five sections. Each of these sections is made up of a two-layer composite construction. The inner layer is made up of carbon/epoxy filament mould constructed on a CNC winding machine and is designed to withstand structural loads. The outer layer is ablative and made of carbon/phenolic filament wound construction. 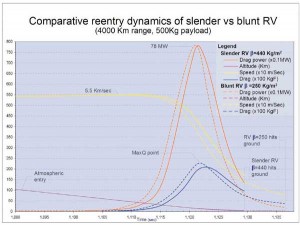 Agni-TD was first launched on 22 May, 1989 to prove the RV-Mk.1. The re-entry vehicle was designed to ensure that the temperature inside the vehicle does not exceed 60° celsius, a condition necessary to protect the warhead and electronic systems placed inside. During tests, the re-entry vehicle technology was fully proved when the nose-cone withstood temperatures of 3,000°C while the inside temperature was only 30°C15. It is important to note that re-entry temperature peak is independent of the payload weight. Thus the Agni-TD with the RV fitted with a high altitude motor could achieve necessary test velocity, to fully qualify the re-entry regime.

The RV housed an integrated High Altitude Motor (HAM). The liquid fuelled HAM is used to correct impulse variance of solid fuelled stages and subtle launch trajectory variance; approximately 50 to 80 kg fuel is estimated to be sufficient. There are indications that the RV is intended to enter a gliding trajectory when it enters atmosphere at an altitude of 100 km, this further reduces thermal stress.

In response to changed security environmentIndia conducted Shakti series of nuclear weapon tests16 on 11 & 13 May, 1998. Shakti-1 (Figure 8-A) was a two stage Thermonuclear (TN) bomb (of modern 1995 design vintage) with a passive third stage made of non-fissionable material. It should be noted that in a Thermonuclear weapon the third stage provides around 80% of the yield from fast fission of U238 by fast neutrons generated by fusion stage17.

Fast fission of U238 (or U235) is a basic material property that does not require testing in weaponised configuration. Shakti-1 did not have a third stage to keep the yield within test-shaft capability (venting) and test site constrains (seismic damage to inhabited villages nearby). The Shakti-1 based Indian TN weapon yield is 200-300 Kt depending on if tamper and case material is made of natural-uranium (U238) or enriched-uranium18. The new 200 Kt TN weapon (Figure 3-B) is much lighter than the earlier 1,000 Kg Boosted Fission weapon (Figure 3-A) that was the basis for earlier RV-Mk.1 design. Fission weapons are dense and spherical in shape, whereas TN weapons have lower density and elongated in shape yet very high yield to weight ratio. The 200 Kt yield TN weapon reportedly weighs less than 450 Kg, however other sources indicate less than 300 Kg weight, yet few other sources indicate a figure as low as 200 Kg19.

Interestingly the 200 Kt boosted fission design that was the basis for Agni-TD and RV-Mk.1 design was not even tested in Shakti-series of nuclear weapon tests in 1998. For best performance the 200 Kt TN payload requires its own custom RV design and rocket stages but that would have to wait for many years.

The 1999 ‘Kargil war’ forced DRDO to improvise and quickly develop and operationalise Agni-II missile that used the new light weight TN weapon albeit using the old RV-Mk.1 that was designed and optimised for heavier 1,000 Kg boosted fission payload. This can be deduced from the pictures of the Agni-II & Agni-I released by DRDO.

This RV largely inherits the basic structure, design and technology of the earlier Mk.1 RV of the Agni-TD, but has more functionality and superior performance. After making room for new and lighter Indian thermonuclear weapon payload, the RV has room for about 200 kg liquid fuel in pressurised vessels to serve as High Altitude Motor for propulsion, as well as velocity correction.

It is interesting to note that long-range missiles developed by other countries use RVs that are passive ballistic mass, thus their accuracy depends on ability of missiles RV-bus to place RV on precise ballistic trajectory. The Agni-RV Mk.2 on the other hand, is more advanced because it embodies propulsion, navigation and control all the way to the target.

At least one variant uses a set of solid fuelled impulse cartridges for velocity trimming. The less than perfect mating of lightweight TN weapon an RV designed for heavier 1,000 Kg payload imposed its own challenges (different CG and lowered ‘²’ due to lighter payload) that also required addition of aero-fins.

The lowered ‘²’ more rapidly slows the RV makes it susceptible to atmospheric disturbances and interception. On the other hand, reduced payload mass significantly increased the missile velocity & range (see range graph in Figure 2).

The RV has an attitude control system and aerodynamic maneuver fins, for better control, accuracy and survivability. Unconfirmed reports suggest that an improved optical or radar terminal phase correlation system has been developed to provide accuracy of around 40 metres CEP.

It is interesting to note that long-range missiles developed by other countries use RVs that are passive ballistic mass, thus their accuracy depends on ability of missile’s RV-bus to place RV on precise ballistic trajectory. The Agni-RV Mk.2 on the other hand, is more advanced because it embodies propulsion, navigation and control all the way to the target. 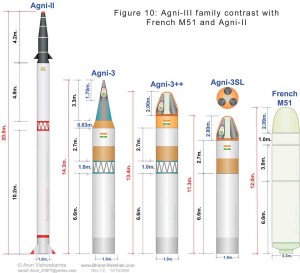 The M51 is a 3 stage missile that is 12m long and 2.3m diameter (Figure 10). All 3 stages have flex nozzle (for thrust vectoring) and the case made of wound carbon-epoxy fiber composite21 to maximise the fuel mass fraction such that the missile can fit into the missile launch tube of French SNLE nuclear powered ballistic missile submarine carrying the M41 missile, yet it carries 50% more fuel to provide 50% more payload and 50% more range.

DRDO’s Agni-III is a 2 stage missile that is 14.3m long and 1.8 metre22 diameter (Figure 10). Both stages have flex nozzle for optimal flight and trajectory control. The motor case are made of wound carbon fiber composite material23 for high fuel mass fraction that is necessary for a small but long range missile. The first and second stages are about 6.6 metres and 2.7 metres long with a 1 metre vented inter-stage24.

The missile supports a wide range of warhead configurations, with total payload ranging from 600 kg to 1,800 kg. The missile is compact and small enough for easy mobility and flexible deployment on different types of surface and sub-surface platforms. The diameter is compatible with a recently tested Indian sub-surface launch system with 2.4 metre diameter launch tube25. The Agni-III is clearly a precursor to a submarine launched version (Agni-3SL in Figure 10). 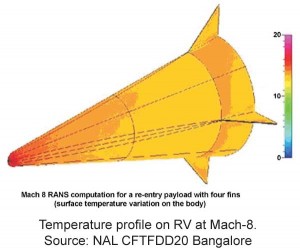 An all carbon composite RV that uses no metal backup (world’s first)26. This light and tough RV enables large increase in range for light payload.

The RV is 1.7 metre long and cone angle of 20° with maximum body diameter of approx 0.6m. Thus the effective body area is at least half that of RV Mk-2. The ‘²’ is high in spite of lighter mass.