The Agni series of strategic missiles were developed as part of Integrated Guided Missile Programme (IGDMP). The IGDMP was launched in 1983 to achieve self-sufficiency in missile capability, with simultaneous development of a wide range of missile: Nag, Prithvi, Akash, Trishul & Agni-Technology Demonstrator.

The range of a missile determines the minimum speed that the rocket imparts on the RV. Longer range requires greater velocity. A launch velocity of 7.7 km/sec (relative to earth) is enough to insert the payload into low earth orbit, yet a full range ICBM that can reach furthest corner of earth (range 20,000 km) requires velocity of 7.5 km/sec.

The IGDMP missiles involved close end-user involvement in all phases, from weapon specifications to development. It is important to note that in 1983 military users had specific domain expertise in weapons systems related to their services, viz Air Force, Army and Navy.

At that time Strategic Forces Command (SFC) or Nuclear Command Authority (NCA) did not exist to take on the role of end-user. That role as we know now was played by a joint team of strategic thinkers, military technologist and select military officers. One can notice that strategic missiles are a different class not only in this aspect but also in the technology & system development aspects.

Strategic missiles have to blend with other key elements that make a complete strategic weapon system viz:

India’s strategic weapons programme started in early 70′s with Project Devil (SRBM) and Project Valiant (ICBM). Project Valiant was an attempt to build 8,000 Km range missile. Valiant missile had three liquid fuel stages. The first stage consisting of cluster of four engines, each of 30 tonnes thrust, second stage of two 30 tonnes thrust engines and last stage with a single 30 tonnes thrust1. The missile lift off weight was about 85 tonnes. The 30 tonnes thrust liquid engine was first test fired on 10 May 1974, but soon thereafter the project was cancelled because of insufficient progress, weak programme management and organisation structure2.

For a given maximum range the MTOW (Maximum Take off Weight) of missile is almost directly proportional to the payload weight. Reducing payload mass involves realising compact and small weapon. Equally important is realisation of light weight RV and other gear that ride the RV.

Smaller payload mass result in other overheads that limits the lowest missile mass. On the other hand, heavy payload mass (say for MIRV configuration) incurs the penalty of providing for a payload nose shield that must be carried up to an altitude of 90 km before it can be jettisoned.

Effect of Fabrication Technology on Weight

For a given range and payload the MTOW (Maximum Take-Off Weight) of missile is largely dependent on rocket motor’s MF (Mass Fraction) and number of motor stages. The fuel’s ISP (Specific Impulse) is also important, but all modern long range missile use solid fuel thus they have similar ISP. 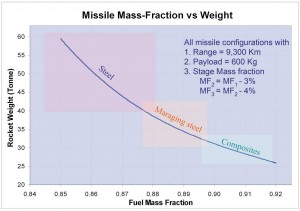 Indian solid fuel chemistry choice, however, has better growth potential compared to US fuel standardised for Space-Shuttle SRB (Solid Rocket Booster)4. Motor’s mass fraction is the single most important factor in determining the weight of missile, especially those designed for 8000 to 18,000 Km range.A case to the point is the recently tested French M51 submarine launched missile5. The 56 tonne M51 has 3 stage and all three motor case are made of carbon-carbon fiber composite material to maximise the fuel mass fraction so the missile can fit into current launch tube of French nuclear submarines6 carrying the M41 missile, yet it carries 50% more payload over 50% more range.The M51 missile’s range is 9,000 km for 6 MIRV payload (1,400 kg including penetration aid). Yet the same missile delivers full ICBM range (20,000 km) for a configuration with fewer (2) MIRVs providing flexibility to France. 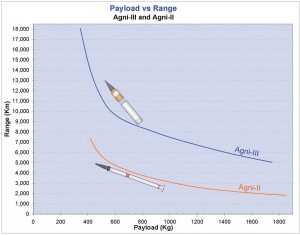 The range for a set MTOW and fabrication technology is dramatically improved if the missile is partitioned into 3 stages. Increased number of stages does impact cost and reliability but its long range performance is much superior for reduced throw-weight configuration.Agni Re-entry vehicle evolved over 3 phases:

In mid-1980’s world’s contemporary strategic weapons development centered around weapon design of between 150-400 Kt yield, instead of Megaton yield that was the norm in 1960’s and 70’s. The Megaton yield of earlier nuclear age was necessary to account for and compensate for poor missile accuracy. Over period of time missile accuracy improved and the same effectiveness could be achieved with lighter and lower yield (150-300Kt) weapons. Lighter weapons also allowed many weapons to be launched on a missile (MIRV).

MIRV evolved from multiple satellite launch programme of civilian space agency7. MIRV greatly improved effective use of nuclear weapons in both counter-force as well as counter-value strike role. For identical net yield, the damage from many smaller yield weapons that are well spread out is many times more compared to a megaton yield weapon8. The era of 1970’s and early 80’s was that of MAD (Mutually Assured Destruction), but technological improvement in 80’s enabled nuclear war-fighting doctrines, i.e. counter-force nuclear weapon application, culminating in development of smaller yield battlefield nuclear weapons including enhanced radiation weapon.

Effect of Range and Payload Mass on RV

The range of a missile determines the minimum speed that the rocket imparts on the RV. Longer range requires greater velocity. A launch velocity of 7.7 km/sec (relative to earth) is enough to insert the payload into low earth orbit, yet a full range ICBM that can reach furthest corner of earth (range 20,000 km) requires velocity of 7.5 km/sec. 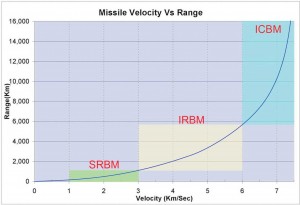 The kinetic energy builds up as square of the velocity, thus when payload re-enters the atmosphere at hypersonic velocity the RV encounters shockwave and supersonic drag that varies along the altitude. It encounters extreme temperature régime (about 3,000ºC) followed by extreme deceleration régime; corresponding to energy dissipation in excess of 100 Megawatt that can easily destroy anything but the toughest re-entry vehicle.Understandably ICBM RV undergoes the worst environment. 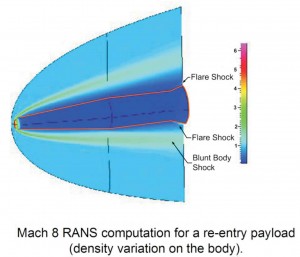 During re-entry the missile encounters extremely high temperature as the atmosphere tries to retard the speed of RV traveling at hypersonic speed.The high temperature can vaporise all known material and the only way to reduce the temperature is to spread the heat flux across a larger RV area and using an ablative material to form a blunt leading edge (typically a semi-hemispherical shaped body made of carbon-carbon reinforced composites).