HSL, the fourth shipyard to come under DDP in 2009 and is engaged in repair and refit of submarines and has built OPVS in the past. It has orders for several bulk carriers (3,000 DWT) and building barges for Andaman and Nicobar administration.

ABG is a modern shipyard and has delivered multiple small and medium sized vessels. A new shipyard at Dahej has come up recently with build capacity of vessels upto 300 m including VLCCs. Bharati will be able to build ships upto 170 m long. Pipavav has huge dockyards and massive cranes. L&T is in the process of setting up two international size shipyards.

Similarly in terms of build time trends, it’s almost four times more than international standards. For instance, a ship with displacement tonnage of 3500 tonnes in US is built in 30 months with 2.5 lakh manhours as against 72 months and 10.8 lakh manhours (Godavari class).

Also there are substantial time and cost overruns between contractual milestones and actual as under:

The overall shipbuilding capacity of DPSUs is at the best four ships a year. During the next 10 years, as against annual requirement of 107 SSUs (Standard Ship Units), around 40 SSUs are available at the DPSUs. 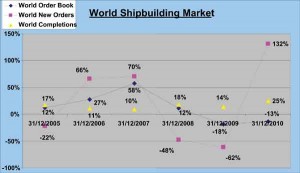 The world market in shipbuilding is dominated by three Asian countries namely China, South Korea and Japan which together account for approximately 90 percent of world market in terms of existing order book at the end of year 2010. The emergence of these countries in the second half of the last century is a lesson for other countries such as India. Among the three nations, China has seen some spectacular growth in the industry since 1990s while South Korea usurped Japan as the world leader in 1999.

The National Manufacturing Council (NMCC) in its report to PMO (2009) made the following recommendations for developing Indian shipbuilding Industry.

It clearly emerges from the foregoing that existing structure governing the Indian shipbuilding sector commercial and warship building is inadequate to meet the burgeoning demands ahead.

During 10th Five Year Plan, (2002 ““ 2007) a subsidy scheme was introduced where 30 percent subsidy on bid price was available to shipyard on domestic and export order. This galvianized the shipbuilding by raising global share from 0.2 percent in 2002 to 1.3 percent in 2007.

This will include construction of additional international standard greenfield shipyards through private public partnership as also through foreign JV arrangements.

Concurrently modernization/upgradation of existing shipyards needs to be undertaken to improve productivity and turnover time in line with global benchmarks.

Build period is greatly improved when a series of ships of identical design are constructed. Series effect studies have shown that 10th ship require 35 percent less work load than the first one.

We have severe limitation in design capability with only IIT, Kharagpur and CUSAT, Kochi and IIT Chennai having some expertise.

The need for increasing FDI to 50 percent in the warship building sector and 100 percent in civil shipbuilding, recognizing shipbuilding as an infrastructure sector of the economy have been highlighted.

Established as an overarching institute to source requisite talent, both quantitatively and qualitatively.

Funding R&D to educational and research institutions in shipbuilding need to be encouraged. Defence Production Policy (2011)8 is a welcome initiative in this regard.

During 10th Five Year Plan, (2002 – 2007) a subsidy scheme was introduced where 30 percent subsidy on bid price was available to shipyard on domestic and export order. This galvianized the shipbuilding by raising global share from 0.2 percent in 2002 to 1.3 percent in 2007. 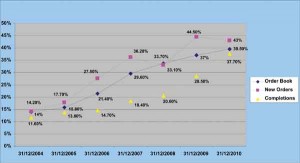 This subsidy was withdrawn by govt. in 2007 for all new orders which has resulted in India’s share dropping to 0.01 percent in 2009 as depicted below: 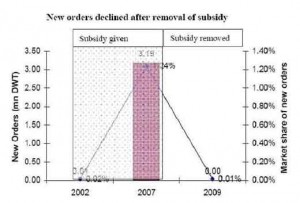 The subsidy scheme needs to be reintroduced urgently and redirected towards capital expenditure. It should extend to capital equipment such as cranes, plasma cutting machine to improve our shipyard’s productivity.

It is quite ironic that shipbuilding is not in the purview of infrastructure in India’s development lexicon. It is high time its strategic importance in global competitiveness is recognized. As a key policy FDI to the extent of 100 percent be allowed in civil shipbuilding sector. Such liberal FDI had catalytic impact in the power and telecom sector as given below: