India is the third largest arms importer and 10th in terms of global military expenditure.1 Capital acquisition of naval ship and platforms account for 25 percent of India’s capital acquisition budget which is around $13 bn. This is expected to grow by at least 20 percent every year. Imports constitute around 50 percent of navy’s capital allocation.

MOD promulgated an Offset policy in 2005 as part of DPP-2005 3 which aims at leveraging India’s big ticket acquisition by bringing in FDI, fostering JV arrangements, sub contracting products and services, boosting exports, setting up MRO facility to bolster indigenous military industry capability. The scope of offsets which was direct was extended to civil aerospace sector and homeland security products in DPP 20114.

India is a major maritime country which is predominantly peninsular in nature having a coastline of 7515. Km and 1197 islands and located strategically in major maritime routes.

The current capacity of all the yards is 5, 00,000 DWT approximately. The Indian Shipbuilding Industry, which had only about 0.1 percent share of the world shipbuilding in 2002, expanded over tenfold to claim one percent share by 2007/2008 riding on the global boom and supported by a subsidy scheme. Shipbuilding turnover for Private and Public Sector Shipyards excluding Defence Shipyards has grown about 14 fold in the last nine years from about Rs.440 crores in 2001-2002 to an estimated Rs.6200 crores in 2010-2011.

A table showing improvements in turnover, employment generation, investments, order book and deliveries of Indian Shipyards from 2002 to 2010 is shown in Table 1 below. 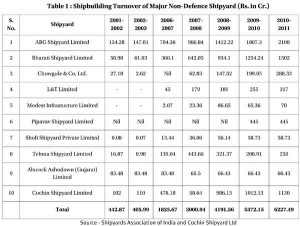 It is estimated that India’s requirement of natural gas will be around 391 MM SCMD by 20255 and India will have a requirement to import 84 million tonne by 2015 6. In terms of LNG vessels India will require 34 vessels by 2025 as against two LNG vessels of 1.38 lakh cubic metre capacity available with SCI.

The overall shipbuilding capacity of DPSUs is at the best four ships a year. During the next 10 years, as against annual requirement of 107 SSUs (Standard Ship Units), around 40 SSUs are available at the DPSUs.

The Indian Navy is committed to the concepts of Self Reliance and indigenization. There are four shipyards under the Ministry of Defence – Mazagon Docks Ltd., GRSE, Goa Shipyard Ltd. and Hindustan Shipyard Ltd. A total of 99 ships have been constructed by these yards and 32 ships have been ordered.

Mazagon Docks Ltd. is a premier warship building yard where construction of major warships was initiated in 1966 with the Nilgiris class of frigates. Since then they have built 16 major warships including two submarines and three destroyers. It is the only shipyard equipped to build warships upto the size of a destroyers. It has also undertaken major refits and modernization of warships and submarines.

It is the third of the defence PSU shipyards and has been building FPVs, OPVs, Missile vessels, survey ships and Sail training ships.

Compared to international benchmark, the productivity of India’s defence shipyards is much below international standards. Also in terms of build time it far exceeds the international norms.

It clearly emerges from the foregoing that existing structure governing the Indian shipbuilding sector commercial and warship building is inadequate to meet the burgeoning demands ahead.

CSL, a PSU, is engaged in construction of the first indigenous aircraft carrier for Navy. It has a capacity to build ships upto 1,10,000 DWT and can build a wide variety of ships for merchant navy, ports, Island territories and commercial ships to national and international owners. It has absorbed technology to build high end offshore vessels. It has so far built 11 bulk carriers, 47 small and medium built vessels, 4 tankers besides a no. of tugs, patrol boats, launch barges, etc.