Shourya and Sagarika is a new common missile that can be launched from multiple platforms, i.e. ground, submarine and mobile launcher. The naval version is called Sagarika, while the land based version is called Shourya1. The Indian doctrine of Minimum Credible Nuclear Deterrence envisages “No First Use” (NFU) policy and a triad of nuclear counterstrike capability. The land based Agni-2 missile range is limited to about 3,300 km, and the longer range Agni-3 will enter service soon. 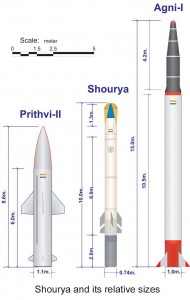 The sea leg of the triad based on blue water naval assets dispersed across the world’s oceans is most survivable and thus a critical part of the triad. The ability to reach all corners of a potential challenger requires a range of 5,000 to 8,000 km. DRDO is developing sub-surface launched long range Agni-3SL with heavy MIRV payload and ABM countermeasures.Indian nuclear powered ATV due for sea trial in 2009 will reportedly carry 12 launch tubes2 of 2.4m diameter. Launch tubes can be flexibly configured to either carry a two meter diameter Agni-3SL or three wooden rounds3 of 0.74m diameter K15-Sagarika missile. Shourya and Sagarika fills the short to medium range gap that is below Agni-3’s minimum range.At operational level these missiles provide for range of warheads necessary for graduated nuclear escalation as enunciated by Indian staff and military warfare collages.4

This multifunction missile made in large quantities would fulfill India’s immediate requirements. The missile optimally matches latest types of strategic weapons tested at Pokhran-II in 1998. The missile will most likely takeover the strategic weapons role of Prithvi and Agni-1 missiles, and make them unambiguously dedicated for conventional roles thus stabilizing nuclear deterrence. Shourya and its counterpart Sagarika has been tested six times5 till date. The missile is expected to enter service in 2010. Sagarika will be deployed on submarines and very likely on ‘Sukanya’ class naval vessels too.

Shourya is a compact, slender, two-stage, solid fuel missile designed as a wooden round. The missile development was initiated as project K15 and was first flight tested6 on 27 October 2004 in the guise of solid fueled Prithvi-III.7 It is stored, deployed and launched in a fiberglass composite canister, which is easy to handle mobile and can be flexibly deployed on different types of surface and sub-surface platforms. Shourya and Sagarika share a common design. The missile is sealed and can be launched from a moving submarine at 50 meter depth. 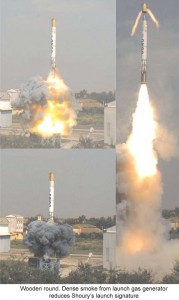 The 6.2 tonne Shourya is 10 meters long, and has two solid fuel stages of 0.74 meters diameter. The first stage booster is about two meters long and the second about six meters long. The missile supports a range of unitary warhead configurations, weighing 180 to 1,000 kg. High missile accuracy and ability to fly in a highly depressed trajectory well within atmosphere indicates that it is a weapon for choice to interdict Command & Control (C&C) and preemptive tactics.The sixth test flight on November 12th, 2008 was a depressed trajectory flight (at Mach 6 and 50 km altitude) with continuous rolling to dissipate heat over a larger surface demonstrated the mastery of difficult aspects of rocketry involving sustained hypersonic flight.The wooden round design sealed in a fiber glass canister with the aero fins folded inside in a clean & controlled environment makes it maintenance free and tamper proof. The missile is launched by a hot gas generator developing 15-200 bar pressure using high burn rate HTBP based composite propellant. The thick dark gas cloud greatly reduces the thermal signature of the missile.

Once out of the launch tube, the first stage booster motor ignites, taking the missile to five km altitude, when, the main second stage motor takes over. The booster debris reaches a maximum altitude of six km, well below the horizon of radars beyond 330 km. The clean and small diameter missile presents a tiny RCS (radar cross-section). 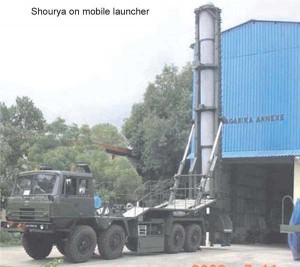 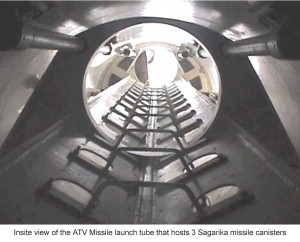 The second stage air fins provide necessary in-flight trajectory control. The main motor is typically expended at 33 km altitude well within the atmosphere; however the air fins remain effective beyond post boost phase. The air fins also allow the missile to fly in a depressed trajectory as well as a cruise and glide in sustained hypersonic regime at 50 km altitude. The payload separation can be done much later after using aerodynamics for trajectory modification during ascent or descent. The missile is resistant to ABM defense.8

Shourya Re-entry Vehicle (RV) supports a wide range of weapons, with total payload mass ranging from 180 to 1,000 kg. The missile range is a function of payload mass (see graph below). 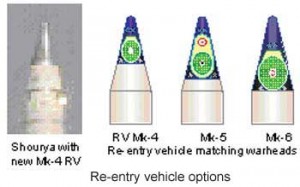 The November 2008 test unveiled the new generation RV that is designed and optimized for newer boosted fission and thermonuclear weapon (including those awaiting confirmatory test). The sharp nose high ‘âeta’ (Ballistic coefficient9) RV design employs 16 cm diameter blunt nose and half angle of 12° that is mounted on a payload adapter to interface with the 0.74m diameter mission control module atop the upper stage. The high ‘âeta’ RV in combination with an all carbon composite body enables higher re-entry speed even with a light weight payload.10

The Shourya has two solid fueled stages of 0.74m diameter. This diameter is compatible with a recently tested Indian sub-surface launch system that has a 2.4 meter diameter launch tube17. 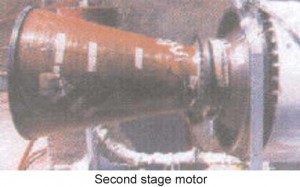 First Stage: The first stage solid fuel booster is approximately two meter long and weighs about 1,300 kg including 1,000 kg high density fuel. The booster lifts the missile to an altitude of five km so that the second stage can operate more efficiently at low atmospheric pressure. It uses hot gas reaction control for initial control of yaw, pitch and roll before the air fins unfold and missile gains sufficient velocity for aerodynamic control surfaces. 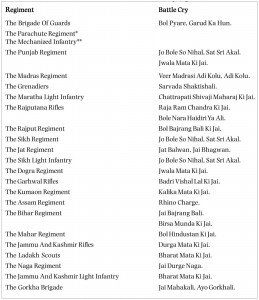 The case is made of 250 grade maraging steel to maximize fuel mass fraction that is critical for scalable payload versus range flexibility. Its nozzle is made of composite material with metallic backup and carbon phenolic liners. The interstage coupling uses a soft-stage separation mechanism and retro rockets for reliable and safe stage separation.

Missile range and payload mass are inversely related. It is interesting to note that press reports the Shourya’s range for 1,000 kg and 500 kg payload. The former corresponding to 1980 vintage 200Kt FBF warhead and the latter corresponding to 150Kt FBF that is yet to be field validated. 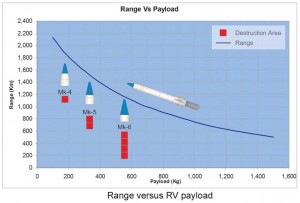 The official reporting obfuscates the missile’s much higher range corresponding to field tested 17Kt FBF warhead that is the mainstay of Indian deterrence.

Shourya class of missile is truly a multi-service missile that has desirable attributes of small size, mobility, stealth, rich set of warhead options, robustness and cost that could make it the most mass produced Indian missile. It complements the long range Agni class missiles to provide the Indian military commanders the global range necessary to secure Indian interests.