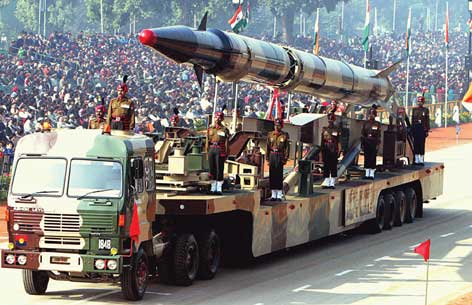 John Kirby, State Department Spokesman of USA, in his daily news conference of 14 May 2016 told the reporter, “I would point you back to what the president said during his visit to India in 2015, where he reaffirmed that the US view was that India meets missile technology control regime requirement and is ready for NSG membership”. This affirmation by the USA set forth a series of diplomatic activities within and outside India at various international forums.

China was first to react to the USA’s plans of admitting India into the elite company of Nuclear Suppliers Group (NSG). Chinese Spokesman said that several members of NSG shared its view that signing the nuclear Non Proliferation Treaty (NPT) is an “important standard” for the membership of the block. Chinese establishment is apparently uneasy with the idea that a non NPT members can also become part of NSG. Some UN members like India, Pakistan, Israel and South Sudan have not signed the NPT, aimed at arresting the spread of nuclear weapons.

The raising of red flag by China cannot be brushed aside as the entry in the NSG is on consensus basis and not on majority. There are countries like Ireland and Sweden who are hard core pro-disarmament group, not very enthusiastic about any “India specific ruling” with regards to its entry into NSG. In 2008, the NSG had exempted India from the requirement of accepting International Atomic Energy Agency (IAEA) comprehensive safeguards and allowed India to engage in nuclear trade with NSG. Even that exemption did not come without India’s commitment to adhere to the basics of NPT, as agreed upon under India-US Civilian Nuclear Agreement.

These commitments included separating its civilian and military nuclear facilities in a phased manner; placing civil nuclear facilities under IAEA safeguards; signing and adhering to the IAEA’s additional Protocol; continuing its unilateral moratorium on nuclear testing; working with the United States for the conclusion of the Fissile Material Cut-off treaty (FMCT); refraining from the transfer of enrichment and reprocessing technology to states that do not have them and supporting international efforts to limit their spread; introducing comprehensive export control legislation to secure nuclear material; and adhering to the Missile Technology Control Regime (MTCR) and NSG guideline.

The India-US joint statement of November 2010 stated that the US intends to support India’s ‘full membership’ in the multilateral export control regimes by encouraging the evolution of membership criteria, consistent with maintaining the core principles of these regimes, including the Nuclear Suppliers Group (NSG) The US commitment was conditional to India’s “full adoption of the regimes’ export control requirements to reflect its prospective membership.”

India has an impressive track record of its commitment to nonproliferation and has exhibited a behavior befitting of responsible a nuclear state. China has been engaging in nuclear commerce with Pakistan in violation of its commitment to NSG Guidelines, would like to use its veto power on admissions to bring in Pakistan as member of NSG in return for its yes vote on India’s case. They are the worst proliferator and their state-owned defence industrial corporations, are helping with Pakistan’s nuclear and missile programme and also Iran’s missile programme. China is also providing North Korea with sensitive items for its ballistic missiles.

China would like to induct, its all weather friend, Pakistan into NSG and is insisting ‘both or none’ as regards to the entry of India and Pakistan into NSG. The NSG , while considering the Chinese move, should remind itself that it was because of the suspected proliferation of nuclear technology by Pakistan that led to the adoption of UN Security Council Resolution 1540 regarding “proliferation of nuclear, chemical and biological weapons, as well as their means of delivery, constitutes a threat to international peace and security”. This was in response to the unmasking of the Abdul Qadir Khan proliferation network. It also need to be noted that Pakistani nuclear establishment is not under the control of civilian government and is extremely vulnerable to fall into the hands of Al Qaeda, ISIS and other Islamic terrorist groups.

Few nonproliferation hardcore states within NSG want that India’s admission to NSG must be criterion-based like imposing additional conditionality which would be unacceptable to India under normal circumstances –such as signing CTBT/moratorium on Fissile material production etc. India will not find the going easy as was in the case of getting waiver of NSG in the year 2008. At that time, the Bush administration was of its own investing a great deal of diplomatic energy seeking NSG waiver for India in order to complete the technical formalities of civil nuclear agreement with India before next presidential election.

There were telephonic calls from USA to the heads of ‘holdout’ states However, this time around, the USA has advised Indian themselves to proactively reach out to the ‘holdout’ states of 48 members NSG as this does not appear to be the priority area of Obama’s foreign policy initiatives. Inspite of India all out lobbying with NSG states and almost conceding to all the requirements of NPT even without signing the same, the chances are that India may be coerced to accept “non nuclear state status” within NSG or may be accorded just an ‘second class membership’ if the Indian diplomacy does not succeed.

India has its task cut out before the next plenary of NSG scheduled in June 2016. Its diplomatic outreach will have to bring the ‘naysayers’ on board. Prima facie, India does not stand to lose much by not getting admission to NSG. It has already concluded bilateral treaties with many NSG countries for nuclear trade. It is now rather an issue of the credibility of an international organization namely NSG, championing the cause of nonproliferation, if it does not have a de facto nuclear state India with an unmatched non-proliferation and democratic credentials as its member.