The first anniversary of 26/11 brings to mind the profound statement of Jawaharlal Nehru ‘To be secure on land we must be supreme at sea’. While Pandit Nehru’s views would have been formed in the wake of the colonization of the subcontinent, his words are a timeless truth which holds good to this day.Post independence, two major assaults on our financial capital, Mumbai, came from the sea, the first being the landing of explosives used for the “Bombay Blasts” in 1993 and the second, more recent, infiltration of terrorists by sea in November last. Both attacks were almost absurdly simple in concept, inexpensive in terms of resources and most effective in sowing murder and mayhem. 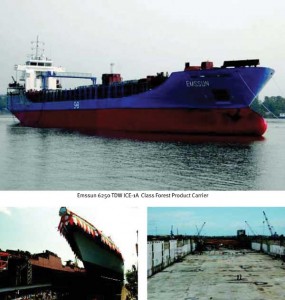 The term ‘secure’ in Nehru’s statement has a larger significance than invulnerability against armed aggression and in fact, covers the wider spectrum of economic security. Maritime supremacy cannot be achieved without the availability of optimally capable assets, in adequate numbers, comprising both, commercial vessels and warships. There is no other way of providing the needed numbers than having a strong and vibrant shipbuilding industry, because great fleets need to be built, not bought. It is not a mere accident that leading economies of the world have had long periods of shipbuilding supremacy during vital stages of their growth. European and US shipyards dominated world shipbuilding in the three decades after WW-II.

The last three decades have seen the rise of Asian economies, led by Japan, followed by South Korea and now China. These three countries have cornered 86 percent of world shipbuilding from a mere 8 percent in 1975. In contrast, India, though ranked 13th, has a share below 1.5 percent despite being a predominantly peninsular country with a coastline of about 7500 km. and having 1197 island territories.

Following the economic reforms of the 90s, India has witnessed tremendous growth in several sectors of commerce and industry, resulting in an exponential increase in the country’s internal and external trade. To enable smooth flow of goods a focused effort has been made to improve transportation infrastructure, particularly in the highways, railways and port sectors. However, such effort is not reflected in the field of shipbuilding, despite its potential to vastly transform India’s industrial landscape.

It can be said that the world’s economy “rides on the sea” as borne out by the fact that approximately 80 percent of international trade is moved by sea. However, India’s share in income generated by world-wide sea freight, which is of the order of $ 350 bn, is a mere 0.55 percent. Indian owned tonnage accounts for 1.2 percent of world tonnage and, of this, the Indian built tonnage is only about 10 percent. 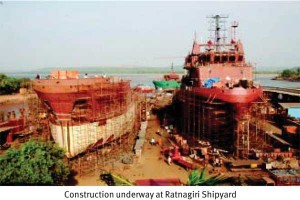 With India having enjoyed an unprecedented high growth in GDP, and the long term prospects remaining bright, there is a requirement for enormous increase in capacity of our transportation network, especially for our maritime sector, considering that 90 percent of our international trade volume is being carried by sea. The freight income generated by sea trade constitutes about 1.8 percent – 2 percent of the value of goods. Increase in India’s share of world freight would be possible only with an increase in the number of ships owned by Indian companies. However, the overall share of Indian shipping in the country’s overseas seaborne trade has been declining over the years. From 40 percent in the late 80s, it is now only 13.7 percent. In the international context, India owns around 1.2 percent of the world fleet and is ranked 20th in terms of fleet size. Smaller countries such as Singapore, Norway and Greece, with no significant cargo of their own, have a fleet size of almost four times the size of the Indian fleet and therefore carry a major share of the world’s seaborne cargo.

India’s foreign trade is expected to maintain a healthy growth, in the long term. For Indian shipping to even maintain its present share in India’s overseas trade, taking into account the expected scrapping of ships over 20 years of age, by one estimate 15.8 million GT would have to be added. This would require an investment of approximately $ 20 bn. Most of this would be spent in foreign shipyards due to inadequate shipbuilding capacity in the country.