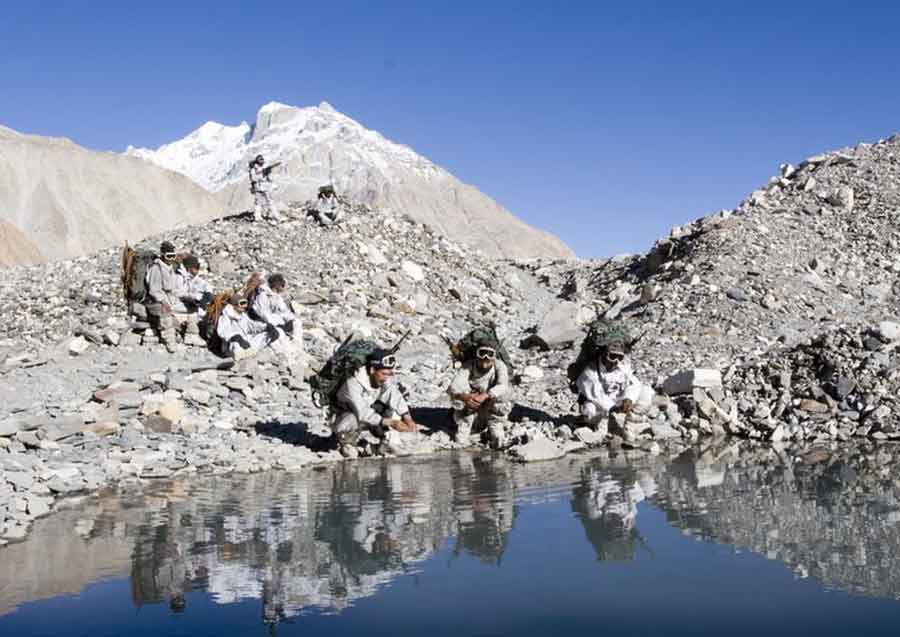 For any cogent action against a potential or a festering problem, the rudimentary requirement for decision makers is to be convinced that there is a problem, and then define its import. This simple prerequisite, nevertheless, eludes India’s decision makers. It is mainly because of our hypocritical propensities. Admittedly, certain amount of hypocrisy is inevitable for the purposes of governance and nation-building, but when stretched beyond credulity, it becomes self-defeating. India has unfortunately fallen into this self-created trap. We have mastered the art of double speak—off the record and on the record. On most panel discussions on television that I have been invited to, the panelists have a set of opinion on camera and another set of opinions off camera. In our bid to be politically correct, we deliberately ignore the obvious. As a result, our internal and external security policy, is more often than not, out of sync with reality, and is rather an effete compromise.

Our hypocrisy begins with the Constitution itself, i.e. with regard to the word ‘socialism’ in the preamble. As per the Oxford Learners’ Dictionary, ‘socialism’ means, “political and economic theory advocating that a country’s land, transport, natural resources and chief industries should be owned and controlled by the whole community or by the state, and that wealth should be equally distributed”. The architect of the Indian Constitution, B R Ambedkar did not include ‘socialism’ as the preamble on the plea, “it is perfectly possible … for thinking people to devise some other form … which might be better than the socialist organisation.”1 The term was inserted in the preamble by a Constitutional Amendment during the Emergency in the 70s. Since then it is binding for every political party to swear by socialism in order to get registered. On 8 January 2008, the Supreme Court ordered the government to respond to a petition, which questioned the validity of the term ‘socialism’ in the preamble. In actuality, when the socialist pattern drove India to the brink of economic collapse, it was compelled to jettison it. We have moved far from socialist pattern of economy—a process that is irreversible. The eminent lawyer Mr Fali Nariman representing the petitioners argued, “it is hypocritical to say that you believe in it when you don’t.”2

The purpose of this article is to delve into the processes and patterns of Indian hypocrisy in historical and contemporary terms, and highlight the hard and uncomfortable realities. Unless we face them squarely, the security problems of India will compound, and the task of nation building will be skewed.

Continuous and varied interpretation of history and historical events is the most positive attribute of a free society and a nation. In India, which prides itself in being a free democracy, there have been persistent attempts by various establishments to disseminate structured history by manipulating some very obvious and well known facts that reside in the historical consciousness of the people and is part of the folklore. It can be argued that engineering of history is an imperative for a nascent nation-state like India. But, in the long run, truth and facts assert themselves and manifest in social, cultural, and ethnic tensions.

Those who underestimate the power of historical forces may well consider that the formation of Israel, and the Israeli–Palestinian conflict is nothing but assertion of historical forces. They may also consider that China refuses to be placated despite unequivocal apologies by Japan for its invasion of China in 1937 and the consequent suffering inflicted on the Chinese population during its occupation. South Korea too has also elicited apology from Japan on the World War II issue of ‘comfort women’. The Pope on his own volition tendered an apology for excesses committed by Christian Missionaries in Goa during the Portuguese rule. There is no country in the world, whose history does not have palatable and unpalatable periods. Each has its share of harsh and benevolent leaders. India is no exception. It is when the unpalatable parts of history are glorified that historical forces wreak havoc. Instead, it is by acknowledging them that we can bridge the historical divides, as in the acknowledgement lies regret, and regret paves the way for reconciliation, and social and religious reconstruct.

…took special delight in humiliating Generals and even had suggested that the army be used for farming. He had not learnt a modicum of lesson from the India–Pakistan 1947–48 war.

Aurangzeb’s 48 years rule is certainly one of the most unpalatable parts of India’s history for the vast majority, although some historians have been straining themselves to prove it otherwise. In his Maulana Azad Memorial Lecture in Delhi in 1960, the famous historian Arnold Toynbee recalled: “Aurangzeb converted these temples with the deliberate intention of insulting his political opponents—the same intention which the Russians had in building the Orthodox Church in the centre of Warsaw. The purpose of these mosques was to proclaim that even in places most sacred to the Hindus, it was the Muslims who were actually ruling. It needs to be stated, that Aurangzeb had an extraordinary knack of selecting sites for building mosques at the most provocative places”.3 The purpose is not to judge as to whether the historical contention of Toynbee is correct, but nevertheless the same opinion is shared by a majority of people in India. When the majority held view comes in clash with what is seen as government sponsored view, the results are regressive. It is rather amazing that there is a road in the country’s capital in the name of communally sensitive Aurangzeb and not Abdul Rahim Khan, who was an embodiment of synthesis of Hinduism and Islam. We also have a road in the name of the defence minister famous for his marathon speech at the UN General Assembly. He relied too heavily on the ‘power of argument’ rather than the ‘argument of power’—and presided over India’s defeat in the 1962 war. He took special delight in humiliating Generals and even had suggested that the army be used for farming. He had not learnt a modicum of lesson from the India–Pakistan 1947–48 war.

On the other hand, we have renamed all the roads and buildings named after British personalities. This is despite the fact that the organisational and functional characteristics of our state apparatus, i.e. the legislature, judiciary, administration, technical and higher education, armed forces, and the railways is rooted in the patterns bequeathed by the British. In the early 19th century, the then governor of Madras Presidency, Sir Thomas Munro wrote, ‘whenever we are obliged to resign our sovereignty, we should leave the natives so far improved from their connection with us, as to be capable of maintaining a free, or at least a regular, government among themselves’. Later Lord Elphinstone, the Governor of Madras and Bombay Presidencies expressed that ‘the most desirable death for us to die should be the improvement of the natives reaching such a pitch as would render it impossible for the foreign nation to retain the government …’.4 The British colonial period had its own share of good and bad rulers, but they were careful enough not to tread upon the religious and cultural sensitivities of Indians, especially so after the first war of independence in 1857. When popular perception is underestimated, and one set of historical actors are vilified, and other set unfairly eulogised for political purposes, it is detrimental to nation building, as it generates confusion and conflict.

…the Indian leaders during the freedom movement abetted the Muslim nationalism by supporting the Khilafat Movement, a pan-Islamic movement, wherein the Indian Muslims did not have any stake.

There can be no greater travesty of truth and history that all invaders, who came through the northwest frontiers, were assimilated or subsumed in the Indian civilisation. Several military forays that Mahmud Ghazni made into India were guided purely by greed and religious intolerance. He never made India his home. Mohammad Ghauri’s most able General Qutb-ud-din Aybak had sacked Ayodhya in 1193, and later, upon Ghauri’s death declared himself the Sultan of Delhi thus establishing the Sultanate of Delhi, in 1206. A General of Qutb-ud-din Aybak, Bakhtiyar Khilji destroyed the university at Nalanda during the same period. The university had been a seat of learning for nearly 1000 years. Much of India’s thought and research in science, mathematics, astronomy, and literature perished.

The so considered assimilated Mughals imposed Jizya (tax levied from those who did not accept Islam) on their majority subjects only because they were adherents of a religion that evolved and was nurtured in the land that they vied to rule. The Mughals practiced sortof apartheid as well. While Muslim feudals in Mughal India were allowed to take Hindu concubines, the reverse was forbidden. The non-Hindustani lobbies like the Irani (Iranian) and Turani (Turkish) groups in the Mughal court were quite active in power play and intrigues. In that, these groups were entirely guided by their personal interests rather than the welfare and progress of Hindustan. The foundation of the fall of the Mughal Empire was laid by none other than Aurangzeb. Most of his life as a ruler, he spent in conquests and carved out an empire much larger than any of his predecessors. But he also, through his religious bigotry, sowed the seeds of disaffection and disintegration, which asserted itself soon after his death. If he had truly concentrated on nation building, the Mughal Empire would not have been fragmented, and paved the way for the British.

I am of the firm opinion that the 1857 First War of Independence was cataclysmic for the future of India, as it spawned to separate streams, Hindu nationalism and Muslim nationalism, and thus laid the basis of Pakistan. It was nothing but basically an assertion of historical forces. Instead of recognising the reality, the Indian leaders during the freedom movement abetted the Muslim nationalism by supporting the Khilafat Movement, a pan-Islamic movement, wherein the Indian Muslims did not have any stake. That historical forces are still at work is evident in the nomenclature of Pakistani missiles—Ghauri, Ghaznavi, Abdali, Babri, etc. It is evident in the Kashmir Valley, which has been purged of thousands of minorities, and where Pakistan sponsored insurgency and terrorism continues unabated for more than two decades, exacting heavy toll in terms of human lives, economy and development.