India is growing fast. Last year, a survey of some 600 companies by the NCAER found that an astonishing 96 percent of them were operating at close to their optimal levels of capacity utilisation. Demand is surging and therefore over the next 5 – 6 years, we can expect an investment in excess of US $ 450 billion in the creation of world class infrastructure across the country. These investments are not an option, they are required to prevent the economy from hitting major roadblocks and heating up. While most of this money will be generated within the country by the expansion of the banking sector and the capital markets, some of it will come in from overseas investors interested in taking part in the action on the ground.

Growth of the kind described above cannot happen through small projects. A market of 1.2 billion people is opening up at a rapid pace and India is setting itself up as a regional superpower. So, while a majority of the investments will be in infrastructure sectors like roads, ports, urban development schemes and social infrastructure projects such as hospitals and schools, the energy business will also see huge sums being invested in power plants and oil & gas infrastructure such as refineries, oil storage facilities, LNG terminals and pipelines. For the energy industry planner, a crucial question to be answered will be “How do we raise the living standards of 400 million people at the subsistence level to middle class status without ruining the environment?”

GCC countries with their huge investible surpluses might be open to the idea of a large reserve outside the region located in a neutral and stable country such as India from which they could continue to supply the oil market globally even at times when the Persian Gulf is blocked to traffic.

100 percent availability of energy resources is necessary to deliver robust growth. This kind of availability needs a large project that guarantees energy security. As described earlier, there has been only one small attempt at building strategic storage facilities in Vizag and Mangalore but the initiative has not really delivered a meaningful solution due to the inadequacy of resources that are required to fund the extensive storage infrastructure as well as the inventory which as current oil prices would be worth close to $ 90 million for every million barrels of a crude cocktail.

The need for large strategic storage of crude oil is not the dispute. What is missing is a dedicated effort aimed at finding innovative financial solutions that could make the reserve a reality.

Given the need of GCC countries and others in the Persian Gulf to ensure access to market even in times of conflict (which now appears likely) and to maintain long term market share in an era where energy alternatives could predominate (Crude Price > $ 60 Bbl), it might make sense to marry the needs of GCC states with India’s need to have a strategic reserve to create a project that meets the needs of all the stakeholders. In addition, as the Indian west coast lies close to the shipping lanes of most GCC markets, there would be a minimal need to alter course for moving cargoes in and out of storage. 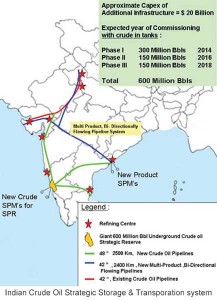 GCC countries with their huge investible surpluses might be open to the idea of a large reserve outside the region located in a neutral and stable country such as India from which they could continue to supply the oil market globally even at times when the Persian Gulf is blocked to traffic. The idea, itself “of storing Persian Gulf crude in India “is not new as it has been mooted earlier by others. Its only now, however that it could be the right time for the oil industry to think in terms of a large Middle East strategic production reserve located on the Indian west coast, 700 Km south of Mumbai. The rationale for this project is compelling and the argument for its construction is simple. Such a project will be of immense benefit to Persian Gulf producers and their customers all over the world.

The classical strategy on reserves in consuming countries up to the year 2002 had been to build them in the $ 16 / Bbl – $ 25 / Bbl range. We are clearly out of that territory now and the US has been building reserves even at $ 65 + / Bbl.

But this particular project is a producers’ reserve and not a consumers’ reserve. This subsumes that the current oil price would make no difference to oil producers as they would simply be moving oil out of one storage tank (the oil field) to another storage tank outside the Persian Gulf. The only additional thing they will be doing is taking a forward view on the freight rate between the oil field and the south India based storage which anyway lies close to their direct trade route to destinations in the US or the Far East. Saudi Arabia and Kuwait, with spare capacities, could then keep pumping into the reserve and always operate at full capacity (but especially during the second quarter of each year when global oil demand drops by close to 1.5 million Bbls / day) till their self determined levels of reserves are attained.

The arrangement while meeting GCC country needs must not compromise Indian energy security. There should be a clear understanding that oil from the reserve will be supplied to Indian refineries / oil companies in the event of a national emergency at market prices.

If demand comes off for whatever reason … be it a US housing sector led slowdown or an Avian Flu pandemic, oil producers could use the period of demand hiatus to fill up the producers’ reserve. This is clearly a very long term plan but as we look at an ever more volatile market, it appears to be an idea whose time has come.

The financing of a large project such as the one being proposed is always challenging. Any financial structure, to work, must be equitable in its distribution of risk. To achieve this, it is being proposed to split the entire project into two Special Purpose Vehicles or SPVs, so as to clearly demarcate ownership and the boundaries at which price risk and title to the crude oil passes between project participants. The project documents must also clearly spell out the conditions under which oil in the reserve can be used by Indian companies and the rights and responsibilities of all parties to the project agreements. This also needs to be tied into a clear and transparent enforcing mechanism which is seen as fair to everyone involved.

One thought on “Indian Energy Security-II”