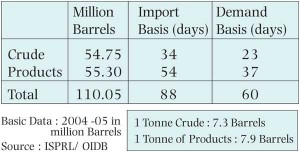 As can be seen from the table above, India has just 23 days of crude oil inventories and 37 days of product stocks at any point in time. This is an extremely alarming situation to be in.This paper will therefore examine the options that ensure the availability of crude oil and finished petroleum products to meet the needs of the country and its surface transport requirements in the event of the occurrence of any of the following:

To cater to the needs of India as dictated by the above possibilities, there is a need for conceptualising and designing a project which ensures that a disruption on account of any of the above factors does not harm the growth prospects for the economy, which is currently registering an 8 percent plus GDP growth rate. To be feasible, the solution must be based on current global energy industry realities, exporter country strategic needs and the unique needs of India given its current financial position and growth plans over the next 20-30 years.

The Answers? Do we have any?

Yes we do. A possible answer, as spelt out in this paper matches the opportunities in the global energy industry and the world’s economic surpluses among oil exporting countries with a need which is specific to India. In doing so it devises an innovative financial structure and a funding mechanism that while addressing market realities and the current geopolitical context, generates a solution that meets the needs of all market participants in an unique way. Central to this solution is financing the storage facilities, pipelines and the massive crude oil inventories (valued at US $ 36 billion @ a crude oil price of $ 60 / Bbl) in a manner that distributes ownership and risk in a fair and transparent manner.

Commodity prices suddenly started shooting up towards the middle of 2003, driven mainly by demand from China as that country moved to dramatically expand its economy. The patterns were seen first in metals like tin and zinc and in oil. It’s a trend that has continued as demand from other countries including India and several in the middle east, started picking up. This demand acceleration, has been accompanied by enhanced geopolitical risk in oil producing countries in the Persian Gulf and in countries such as Nigeria where production has dropped sharply due to ethnic conflict. High oil prices have also been driven by a weakening in the US dollar (which is the invoicing currency for a majority of production) and the actions of speculators in the financial markets who have been actively involved in playing the entire forward curve.

The massive increase in the price of oil (basis WTI) from $ 31/ Bbl as an average for 2003 to $ 100 / Bbl at the beginning of 2008 has resulted in huge surpluses in producing nations. The GCC countries alone have earned a windfall US $ 600 billion in 2006. Going by the fact that the Saudi government is able to balance its budget at an oil price of approximately US $ 35 / Bbl, it is therefore quite believable that the GCC states have finished the year with a net investible surplus of US $ 170 billion in 2006 alone.

Ever since Churchill, as First Lord of the Admiralty, took the crucial decision to switch all the ships of the Royal Navy to oil fired furnaces from coal which they were using, the middle east has been an area of conflict. Today, there are clear signs that the conflict will escalate as Iran seeks to develop its nuclear capability.

Since oil prices have been rising since 2002, the investible surplus has been accumulating at an increasing rate and is now looking for suitable destinations both within the middle east and in other geographies.

Ever since Churchill, as First Lord of the Admiralty, took the crucial decision to switch all the ships of the Royal Navy to oil fired furnaces from coal which they were using, the middle east has been an area of conflict. Today, there are clear signs that the conflict will escalate as Iran seeks to develop its nuclear capability. This has given rise to legitimate fears that the Persian Gulf might be closed to shipping, every now and then, due to a possible blockage of the Straits of Hormuz due to a war in the region. This is a big worry for all countries and not just those in the Persian Gulf.

While the current high oil prices are good for the exporting countries concerned in the short term, they do however create long term problems of market share as other energy alternatives become viable at an oil price over US $ 60 / Bbl. It is therefore not in the long term interests of oil producing countries to have the market trade at current levels. It is thus to be expected that these countries will take executive measures that remove the risk premium (related to geopolitical incidents) and the resulting volatility out of the oil market so as to ensure price stability and long term market share for their production. There might even be a need for OPEC to collectively evolve a strategy which while giving members an adequate surplus, caps oil price at a level of $ 60 / Bbl.

To secure its energy infrastructure, Saudi Arabia has been spending close to US $ 2 billion a year to guard its oil terminals in the Persian Gulf as also its giant central oil processing plant at Abqaiq. The Kindgom has also spent huge amounts in building backup pipelines to an export terminal located at the Red Sea port of Yanbu. All this money however still has not provided the Saudi’s with a viable alternative to their main trade route via the Straits of Hormuz. Other Persian Gulf countries do not have any such alternative. So, going forward, high oil prices and a possible prolonged blockage of their main trade route are the main risks that Persian Gulf states will be very keen to mitigate.