Talking about energy security has become a fashion. Every now and then there is a conference on the subject or someone writes a scholarly article. The flavour of the season could be “equity oil” (buying stakes in oilfields overseas) or it could be “renewables ” such as Solar / Wind energy. Sometimes the discussion is about high oil prices (WTI crude just touched $ 100 / Bbl) being a threat to our energy security. As far as conferences go, there usually is a big function, a nice lunch and then everyone goes home.

The scholarly studies on their part present the reader with voluminous sets of data and they make detailed comparisons of various options. As the reader approaches the last page, however, he/she is usually left wondering whether there was anything worth implementing in what was just read. 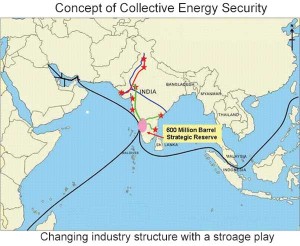 Achieving energy security is a serious issue. It is projected that by 2020 India’s dependence on imports will rise to 92 percent from the 70 percent levels we are at today. The Indian economy is therefore getting increasingly vulnerable to supply disruptions and this has serious implications on our sovereignty from a military and economic standpoint.The only notable, large scale, policy initiative of the government that has led to tangible energy security is the NELP (New Exploration & Licensing Policy). This initiative, which was flagged off in 1997-98, has already yielded good results and has led to the discovery and development of large scale gas reserves on the east coast of India.

The Reliance Industries promoted KG D6 project for instance will lead to nearly doubling of indigenous natural gas supplies in the country from 88 MMSCMD currently to almost 166 MMSCMD by mid 2008. More oil and natural gas discoveries by others are expected under the NELP and this will lead to enhanced energy security and a reduction in the energy intensity of the GDP. It is to be noted that NELP has succeeded because it was based on the principles of free markets which attracted investment.

India has just 23 days of crude oil inventories and 37 days of product stocks at any point in time. This is an extremely alarming situation to be in.

The recent successes in discovering indigenous natural gas reserves however do not provide any security in the supply of critical transportation fuels and feedstock inputs to Indian refineries. There is therefore a very urgent need for a government promoted PPP (Public Private Partnership) project which encourages the private sector to work with government companies to deliver a large project that can guarantee energy security. This will bring new ideas to bear on the issue and lead to the construction of the necessary secure infrastructure in the area of transportation fuels.

For the purposes of this paper, energy security has the conventional meaning which countries like the US, Japan, some within Europe and more recently China, have adopted, which aims to create a large buffer stock of not only crude oil (to feed refineries) but also petroleum products.

There has been a small move in the direction of strategic reserves, by the Government of India, which, acting through the Oil Industry Development Board (OIDB) has set up “ The Indian Strategic Petroleum Reserves Limited (ISPRL)”. ISPRL’s initial mandate is to set up a strategic crude oil reserve of 5 million metric tonnes, equivalent to 19 days of imports (basis demand in 2006–07). The company has since proposed three different locations for the setting up of the reserves. 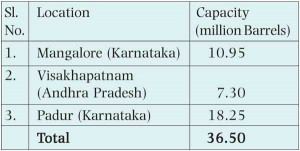 As this paper goes to press, The Ministry of Petroleum & Natural Gas, is all set to award the first contract to construct two underground oil storage caverns at Vizag. The site selected for the reserve has already received environmental clearance and land acquisition is almost complete. The site will store high and low sulphur crudes in a 70:30 ratio. This reserve however is smaller than those planned at Mangalore and Padur (which is 40 Km from Mangalore).The recent successes in discovering indigenous natural gas reserves however do not provide any security in the supply of critical transportation fuels and feedstock inputs to Indian refineries.


The government of India has so far approved a total investment of US $ 2.85 billion for the creation of the 36.5 million barrel reserve which is expected to be built over the next nine years. Annual operating costs for the programme are estimated to be US $ 20 million. The government has been planning the emergency reserve since the mid-1990s, but disputes over funding and ownership have hampered progress. So, in effect as the strategic oil storage available currently is zero, the only real buffer capacity that India has is the oil inventory that is maintained with the individual Indian refineries to support their normal operations.