Panipat Syndrome. In times past, an Indian ruler met an invading army not at the frontiers of his kingdom but close to the seat of power. He remained well entrenched with his army within a fort or a fortified location. The enemy had a free run of the rest of the territory, winning half the battle without firing a single shot. He then reached the seat of governance.

Here, either he was met by the king’s army on the outskirts. In the alternative, he laid siege of the fort. Expecting a long siege, the fortifications of the defending king were well stocked. Meanwhile, the enemy looted and plundered the surroundings for sustenance, labour, riches and pleasures. The few exceptions in this sanctified war philosophy were the Gupta dynasty, the heydays of Mughal rule and the British period.

Also, the Indian king confronted the enemy mounted on elephants (mobile forts) around which the rest of his forces were structured. The structure was ceremonial no doubt, but was fatally ponderous. It was such war philosophy that enabled Babur’s highly mobile cavalry to win against the cumbersome local ruler’s army.

The irrational defensive defence policy, which simply is the sum total of Indian civilizational belief that peace at all costs is vital, allows the enemy to keep nibbling the territory at the frontiers.

Underlying the entire edifice of such war philosophy was the craving of Indians for peace at any cost. The Indians simply abhorred use of force, and viewed it in utterly disparaging terms. Diplomacy continued to search, even in a critical situation, for alternatives that enabled bypassing the need for use of force. The end result was that Indian rulers invariably blinked first!

Independent India. On independence, instead of taking a realistic and rigorous look at the reasons for the country’s history of subjugation, the leadership again naively delinked the military component from its foreign policy.

There was no way that the political leadership, fed and brought up on defensive defence characteristics, and the modern Indian military, trained on the universal concept of offensive defence capabilities, could see eye to eye. A persistent belief that since an Indian desires peace and the rest of the world will act according to our role model, has invariably let us down.

In the 1947-48 conflict, despite India’s superior ratio of 2:1, Pakistan’s invasion to grab Kashmir was localised and absorbed within Kashmir. No doubt, in the difficult mountainous terrain a herculean effort was required to counter-attack. But if the political leadership had pushed an offensive into Pakistan through Punjab or Rajasthan, simultaneously, the results could have been dramatic.

Despite sound military advice in 1962, the Indian army was ordered to throw the Chinese “out of every square inch of the Indian territory”. This was neither here nor there! A general from the Army Supply Corps was thrust as Corps Commander. He almost literally followed the instruction to hold every square inch of land by thinning out troops in a forward policy. (The police in Delhi may be observed even today resorting to this forward policy in crises by deploying two constables on each road to no effect). And the Air Force was not brought in which could have tilted the scales.

The political leadership surprised the military top brass in the 1965 conflict by agreeing to the strategy of opening new fronts as counter-pressure points instead of allowing the enemy to retain the initiative in his place of choosing, i.e., Rann of Kutch. But here too, the failure was in not building up a tri-service effort to break the will of the enemy. This was rectified to some extent in 1971 when the political and military leadership moved in a rare synergy to launch a quick offensive to create a new nation in a single stroke.

The Fallout. The irrational defensive defence policy, which simply is the sum total of Indian civilizational belief that peace at all costs is vital, allows the enemy to keep nibbling the territory at the frontiers. Low-intensity conflict in the last ten years in Kashmir is the current example. This policy has multiple negative ramifications. Some of them are listed below:

…the Indian outlook ensures that the frontiers are left at the mercy of the enemy. The riches of India attracted Babur and the British, and they had a field day.

The Danger. Clausewitz held that war is a rational instrument which a ruler resorts to in pursuit of “political discourse by other means”. The world, too, subscribes to that axiom. Naturally, therefore, if the enemy slaps you once, it is his fault; if he slaps you again, it is your fault. In reversal of all strategic norms our defence philosophy continues to offer the other cheek. Result: Heads, we lose. And tails, you win! 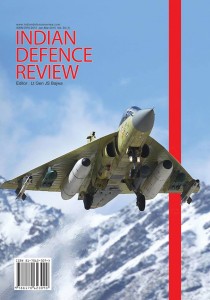 While American policies are aggressively designed world-wide to ensure peace and prosperity at home, the Indian outlook ensures that the frontiers are left at the mercy of the enemy. The riches of India attracted Babur and the British, and they had a field day.

A far greater danger for India than any asymmetry in weapon systems lies in its asymmetry in mental thinking vis-a-vis the rest of the world. The king, his men and the people, if they cannot bring themselves to shift to offensive defence postures, are likely to have a great fall.