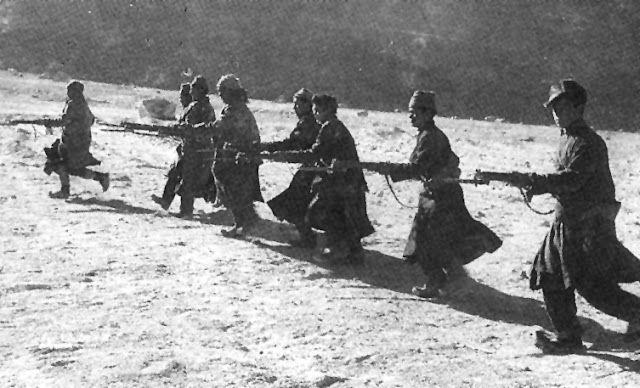 When one reads the Chinese press related to defence issues, one gets this type on ‘scoop’ every day. However one has to remember that all publications in the Middle Kingdom are controlled by the Communist Party of China (CPC), therefore mere propaganda pieces.

One, of course, runs the risk of being brainwashed into believing that the People’s Liberation Army (PLA) is several generations ahead of India, at least in technological terms.

In just a few days, The Global Times reported that Chinese scientists have developed “an exoskeleton system specially designed for high-altitude regions, and the equipment is expected to conserve users’ energy in tasks including patrol and logistics support.”

The end of the old infantry patrols?

Then, new-generation assault vehicles were said to have been commissioned into a battalion of the Tibet Military Command (TMD): “The vehicles will give PLA troops operating in high altitude regions high mobility, winning them advantages in stamina and time,” explained an article.

The TMD would have conducted long-distance exercises featuring heavy equipment, including dozens of Type 15 light tanks and different types of infantry fighting vehicles and trucks, “in a move experts said demonstrated the PLA’s rapid, comprehensive deployment capabilities in high-altitude border regions.” All these ‘scoops’ are of course targeting India.

A video showed a combined arms brigade attached to the TMD using railways and motorized vehicles maneuver in a day-and-night long-distance exercise in mountainous areas located more than 4,000 meters above sea level: “…Most of the heavy weapons and equipment featured in the drills were newly commissioned.”

Another day, The Global Times mentioned “newly developed, self-powered dismountable insulated cabins [in Tibet] … amid the prolonged border tensions between China and India.” It added that the living conditions and combat capability of border defense troops has been greatly enhanced as the region entered winter. A video showed officers and soldiers of the Xinjiang Military Region (opposite Ladakh) wearing only short-sleeved shirts in the cabins.

Another report asserted that hot food was delivered to the PLA troops posted in forward positions, using the latest drones.

All this is obviously to try to demoralize the troops on this side of the border, but the Indian jawans are not much affected by this type of propaganda; they have their own motivations and professionalism, any day superior to their PLA opponents.

In the present context, it is worth remembering those who ‘saved’ Ladakh against the Pakistani invaders soon after Independence.

They did not have any gadgets, but were great soldiers with incomparable enthusiasm, strength and patriotism.

Take the case of a young Ladakhi, Chhewang Rinchen, who earned his first Maha Vir Chakra (MVC), the second-highest decoration in war time, in 1947 at the age of 17, after raising the Nubra Guard and protecting the mountainous region against the wild Pakistani raiders.

Fifteen years later, it is he who informed Delhi of the Chinese heavy build-up in the Aksai Chin; in June 1960, Chhewang was transferred to 14 J&K (Ladakhi) Militia, a newly raised battalion. On arrival at the Spituk Dak Bungalow in Leh, he was ordered to move with a company to Deskit in the Nubra Sector. He was soon given the responsibility of the construction of an airfield at Thoise; it was the first airstrip to be built in this area and the second in Ladakh, after the Leh airport built in 1948. After Chhewang accomplished this remarkable feat, the first Dakota could land on the new airfield on September 26, 1960.

The presence of the Chinese troops in the area only dates from that time; Chhewang’s mentor was Major (later Lt Col) Randhawa, who dispatched the young Ladakhi “on recces in uncharted wilderness of the Depsang Plains and desolate heights beyond.” Incidentally, Randhawa himself was awarded an MVC for his achievements in Ladakh during the years 1960 to 1962.

Chhewang’s biography states: “In August 1961, in pursuance of the Forward Policy, Rinchen was ordered to recce the area in the extreme north and establish a post at DBO, very close to the Karakoram.”

Located 120 km from Leh on the old Silk Route between Leh and Yarkand, DBO lies at an altitude of more than 5,000 metres, 16 kms south of the Karakoram Pass.

At that time, there were two routes from Leh to DBO; one via the Shyok river which was the winter route and the other one across the perilous Saser La (pass), the summer route; both routes converged at Murgo.

These names sound familiar since the Chinese advances in Ladakh in May this year.

In June 2020, The Hindustan Times reported: “India is working on two key roads near the China border in eastern Ladakh — the site of a tense weeks-long border stand-off with its northern neighbour — to provide connectivity to an important forward area that the military calls Sub-Sector North (SSN). While the first is the strategic Darbuk-Shyok-Daulat Beg Oldi (DS-DBO) road that provides connectivity to the country’s northern-most outpost, DBO; the second road being built from Sasoma to Saser La could eventually provide an alternative route to DBO near the Karakoram Pass. The Sasoma-Saser La road axis is south-west of DBO.” A key bridge inaugurated by the Indian Defence Minister, is called ‘Chhewang Rinchen bridge’.

In 1971, the young Ladakhi single-handedly recovered the Nubra Valley from the Pakistani troops. As he was proceeding to attack Khapalu in Baltistan, he was stopped by the Army Headquarters after securing Turtuk. Had he succeeded there would be no Siachen issue today. Why was he stopped? We will probably never know. Incidentally, there was no question of ‘drones’ to deliver the food to the Nubra boys; Rinchen just confiscated the supplies of the Pakistanis troops on the way; he and his men lived on their dhal and rotis. No fancy swatch either, Rinchen knew each and every ridge and valley.

In 1971, Col Rinchen was awarded a second Maha Vir Chakra for his prowess; he is one of only six defence personnel to have the MVC with bar (twice-awarded).

No, the raiders did not want to convert to the Buddha Dharma, they just wanted to loot the monasteries of Ladakh and walk away with their treasures (gold, precious stones, wood for construction, etc).

In February 1948, two young Buddhist officers from Lahaul, Captains Khushal Chand and his cousin, Prithvi Chand, offered their services to the nation to stop the raiders. The duo managed the incredible feat of crossing on foot in winter the snow-bound Zoji-la between Kashmir and Ladakh; they were accompanied by a small caravan of men and mules carrying arms and ammunition. The young captains reached Leh safely to prepare a surprise for the raiders. Both were awarded the MVC.

The citation says: “In February 1948, Major Khushal Chand was one of the two officers who volunteered to go to Leh to help in raising a local militia force and to conduct the defence of the Ladakh Valley. For four months Major Khushal Chand with one platoon of J&K State Forces and about twenty local militia hastily trained delayed the enemy advance south towards Leh along the Indus Valley. He conducted guerrilla warfare of a skilful nature giving the impression to the enemy that he had many more men than he actually had. On one occasion he held the Khaltsi bridge for24 hours with just himself and one sepoy and later set it on fire. This delayed the enemy for a further week. Throughout these operations without proper rations, without mortars and with an acute shortage of ammunition, Major Khushal Chand led his small band with vigour and skill and by personal example of daring and ‘daredevilry’ he carried out his task successfully. He thus maintained the high traditions of the Indian Army and set a fine example to those serving with him.”

This daring act by the young Army officers, has since then emulated by many brave soldiers to defend the Indian territory. It is worth visiting the Hall of Fame near the Leh airport, where the exploits of Col Chewang Rinchen, Khushal Chand, Prithvi Chand and other heroes, are portrayed.

More recently, Major (later Colonel) Sonam Wangchuk (another Buddhist soldier to be awarded the MVC) and his Ladakh scouts recaptured some of the crucial peaks occupied by Pakistan during the Kargil war in 1999. I still have the image of Wangchuk, praying to the Dalai Lama, the Bodhisattva of Compassion, to give him the strength to defend India, his nation.

Today, the times have changed, so has the enemy. China is certainly much more powerful and better prepared that the Pakistanis in the 1940s or 1950s, but one should not read too much Communist propaganda; even if the PLA was able to have the latest armament or equipment, they miss the josh and motivation of the Indian troops; let us not forget that the Chinese belong to a single-child generation.

Today, the Ladakhis and Tibetans have been joined by the Sikhs, the Madrassis, the Garhwalis, the Rajputs, you name them, who are well trained psychologically and otherwise, to defend the nation. They all have the same motivation that the young Ladakhis or the Lahaulis had 70 years ago.

Today like yesterday, this is what will make the difference if a conflict takes place, it will not be the kitschy non-existent swatches.

Let us hope that President Xi Jinping realizes this at the earliest.