National security, is that ambience, in which a nation is able to protect and promote its national values, pursue its national interests and aspirations, in spite of, or, in the absence of, external or internal threats, real or perceived. Threats to national security may impact on any aspect of a nation’s life, ranging from its territorial integrity and internal cohesion to its economy, political structures and institutions, diplomacy, national leadership, national character, morale and so on. The armed forces of a nation have a vital role to play in meeting these threats. 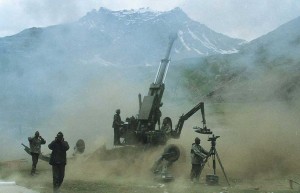 We are one of the oldest civilizations on Earth. Nearly, a sixth of the human race is Indian. Our country occupies a strategic location on the southern promontory of the Asian land mass and dominates large expanses of the Indian Ocean including the routes to the oil rich Gulf region, South East Asia and the Orient. These intrinsic attributes qualify, indeed demand, that India be a major player at the world stage.By tradition, India has been a peace-loving and responsible nation. It has abjured aggression, espoused the doctrine of ‘Ahimsa’ or non-violence, led the non-aligned group of nations and played a constructive role as a member of the United Nations. This tradition clearly suggests that India should aspire to become a benign and moral superpower, rather than one, whose brute strength or wealth alone, confer on it, its place under the sun. Any examination of our strategic environment must be carried out against the backdrop of our strategic vision and the long term plans and strategies needed to realise that vision. By such an examination, we shall be able to predict the strategic environment of the decades ahead, and arrive at the appropriate force structure and equipment profile for our Army of the future.

The aim of this article is to visualise the likely national security environment in 2020 with special reference to the threats and challenges that may confront us at that time, and arrive at the most appropriate force structure and equipment profile for the Indian Army of 2020.

While the focus in this article is on the Army, it must not be construed that the Army can fulfill its missions without the active partnership of the Navy and the Air Force. Joint, or preferably, integrated tri-service functioning in war and peace will be an essential pre-requisite for success in all our operations.

With this background, let us examine the geo-strategic environment we might face in 2020.

Two major events, roughly a decade apart, have played a major role in shaping the current geo-strategic environment. The first being the demise of the Soviet Union. It brought the Cold War to an end, and conferred on the USA, an unchallenged pre-eminence in the world as the sole superpower. The second was the ‘9-11 Event’ – the 11th September 2001 terrorist attacks on targets in Washington DC and New York. This impelled the USA to declare ‘War on Terrorism’, and attack Afghanistan and Iraq with a ‘coalition of like-minded countries’, with the purpose of ousting their regimes, which were sponsors of terrorist groups like Al Quaeda and were hostile to the USA. The USA believed that Iraq was in possession of weapons of mass destruction (WMD).

The impact of these two events are now being clearly felt in international affairs and by all indications, appear to be long lasting. We need to take note of the following major ramifications, which are specially relevant to India :-

After this brief estimate of the geo-strategic environment in, 2020, let us turn to India’s internal security environment.