Indian Air Force of the future

The induction of nuclear weapons in South Asia has added a new dimension to the Indo-Pak military confrontation. Pakistan is believed to have unknown quantities of Chinese supplied nuclear weapons and has the capability to deliver these using surface-to-surface missiles with adequate range to cover most important cities and targets of strategic value. India too has nuclear weapons and has one advantage over Pakistan wherein the latter lacks strategic depth. In order to neutralize the Pakistani nuclear threat and raise their threshold substantially, India needs to enlarge her own nuclear arsenal and diversify her delivery capability with bias towards surface-to-surface missiles complemented by combat aircraft in the ratio 75:25.

The nuclear warfare capability needs to be developed to the extent necessary to obliterate most cities in Pakistan in a single strike and this capability must be clearly made known to them by direct or indirect means. With such a capability in being, there would be a high probability that Pakistan would be deterred from first use of nuclear weapons. Although the President of Pakistan, Asif Ali Zardari has proclaimed a “no first use” policy, it would not be prudent to take this assurance at face value and neglect or delay the build up of own capability. We need to bear in mind the principle that nuclear weapons are not meant to win but to prevent wars.

Against the traditional enemy with whom India has fought three major conventional wars since Independence and who now is engaged in aggressive subversion in different parts of the country, it should be clear that in the future, the traditional military posture will progressively become less relevant as the clandestine warfare of the future will have no clearly defined fronts. This would necessitate redefined doctrines and restructured inventory. First and foremost, there has to be a profound qualitative change in the capability of surveillance and communication intelligence through extensive employment of aerial platforms.

Surveillance platforms parked at medium to high altitudes must be capable of providing resolution of a few centimeters with all-weather capability through cameras in the optical and infrared frequency range, Synthetic Aperture Radar or other new generation sensors to be introduced in the future. These advanced sensors need to be mounted on new generation Unmanned Aerial Vehicles (UAV) with continental range and high endurance capable of being controlled and operated thousands of miles away from parent base through satellite based data link.

The nuclear warfare capability needs to be developed to the extent necessary to obliterate most cities in Pakistan in a single strike and this capability must be clearly made known to them by direct or indirect means.

Such a system can provide round-the-clock cover of any part of land and sea frontiers as also inland areas of the nation. This will obviate the need to reposition the bulky control infrastructure in different parts of the country. The airborne platforms must also carry powerful and agile sensors to record, identify and pin-point the source of all radio transmissions on a wide range of frequency bands. Intelligence gathering through UAVs on continuous patrol would have to be supported by high speed, possibly automated intelligence data processing and analysis systems, which should include capability of integration with intelligence inputs from other agencies.

Threat thus analyzed must be available in the shortest possible time to security agencies required to respond. For swift response, an effective method is vertical envelopment through a heli-borne force with the helicopter fleet dedicated to this task, data linked with the UAV to get a real time view of the objective.

The ever increasing cost of fixed wing combat aircraft and their weapons, as also substantially enhanced lethality of enemy air defence weapon systems, would render employment of such aircraft both in the deep strike role and in the tactical battle areas, less and less cost effective in the future. It would be necessary therefore to place greater reliance on surface-to-surface missiles for deep strike against heavily defended targets in depth such as airfields. In the tactical battle area the fixed wing combat aircraft would have to be replaced by Unmanned Aerial Combat Vehicles (UCAV) and rotary wing platforms with stand-off weapons, both integrated with the ground forces. Fixed wing aircraft when employed would have to be effectively protected through versatile electronic warfare capability. Strategic Air Defence capability of the IAF would have to be augmented through the enlargement of the fleet of AWACS and AEW aircraft . These systems would effectively close the prevalent gaps in the low level surveillance capability of the IAF. Simultaneously, it would be necessary to induct new air defence missile systems for area and point defence and revamp electronic warfare capability across the board.

Riding the wave of stupendous economic growth, China has emerged as a major regional power and has clear aspirations to be a global power in the not too distant future. Despite prolonged dialogue, there has been no progress in the settlement of Sino-Indian border dispute and none is likely in the foreseeable future. China is a nuclear power and is currently embarked on a major upgrade of its somewhat outdated military machine. She has enlarged her sphere of influence in Asia and has effectively thrown a cordon around India through political, economic and military support to all the immediate neighbours. India’s growing proximity with and subservience to the US consequent to the Indo-US nuclear deal, has clearly pushed India on to the opposite side of the international political divide. With this development, the possibility of rapprochement with the emerging superpower has practically receded into oblivion. In the long term perspective, China is potentially a greater military threat to India than Pakistan is. 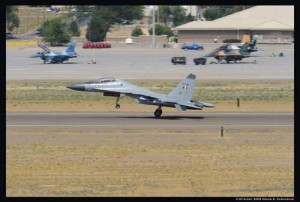 Thus it would be unwise for India to depend solely on diplomacy or support of the US to secure the nation against the awakening giant in the north. The limitations of diplomacy without the backing of military power have so clearly been exposed in the confrontation with Pakistan in the wake of 26/11. If India’s diplomatic demarche has not succeeded against Pakistan which is relatively a weak state, it would be naive to assume that it will be effective against China. The character and level of threat from China is qualitatively different and the nation’s armed forces must be geared to meet the long term threat beginning to loom over the horizon. Finally it would be the armed forces that would have to face the consequences of diplomatic failure and bear the brunt of a Chinese offensive in any form.