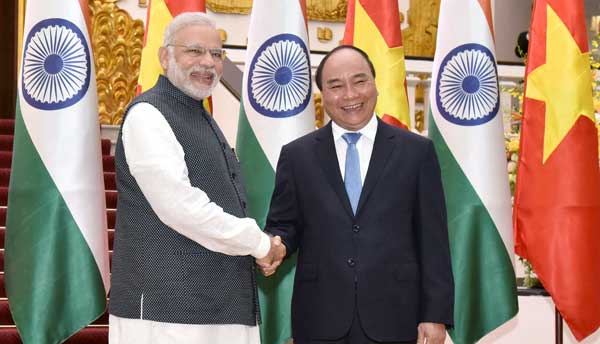 Vietnam’s open invitation to India, at the Delhi Dialogue IX, to make use of its (India’s) good offices to ensure strategic security and freedom of navigation in the South China Sea (SCS) can be taken as an important dimension in the geopolitics of Southeast Asia.

For India, the invitation provides different possibilities – strategic and economic. It gives New Delhi an opportunity to counter balance Beijing’s growing bellicosity in the Himalayas and increasing footprints in the Indian Ocean region. It also opens up an opportunity for India to enhance exports to Vietnam which, over the past few years, has become one of the fastest growing economies in South East Asia. For Hanoi, India’s presence in the region and particularly in the SCS will give much needed strategic and psychological support in the face of open Chinese threats, particularly after the abject capitulation to China by the Philippines, when Rodrigo Duterte, the Philippine President, announced in October 2016 that he was shifting allegiance from the US to China.

However, Vietnam favours a multilateral approach to solving regional issues and would not entangle itself in any patron-client relationship with any big power. Vietnam needs India in Southeast Asian geopolitics to obviate negative effects of America’s withdrawal from the Trans Pacific Partnership (TPP), which will provide China with extra leverage in regional affairs.

India has responded with alacrity. New Delhi had, in 2014, extended a USD 100 million credit line to Hanoi for defence procurement. In 2015, the two countries issued a joint vision statement for defence cooperation and signed a memorandum of understanding for coast guard cooperation. During Prime Minister Narendra Modi’s visit in 2016, another USD 500 million credit line was extended to Hanoi and the existing strategic partnership was elevated to the level of comprehensive strategic partnership, a bilateral arrangement Hanoi now enjoys with only China and Russia, apart from India.

Vietnam recorded 6.21 % economic growth in 2016 and, according to World Bank estimates, is likely to have 6.3 % annual growth over the next three years. There is scope to enhance Indo-Vietnam bilateral trade from the present USD 7 billion. After the US withdrawal from the TPP it seems likely that Hanoi may lose some of its export markets in the US. Here the burgeoning Indian economy can compensate by accommodating more Vietnamese goods.

In spite of general economic buoyancy, Vietnam, in the first quarter of 2017, has witnessed a sudden slump in the manufacturing and mining sectors particularly related to coal and gas, for lack of modernization. The country is in need of direct foreign investment. Almost half of Vietnam’s workforce is in the small and medium sized industries which make up nearly 97% of 500,000 registered industrial units. India can lend a helping hand to Hanoi in modernizing its industrial infrastructure by raising its direct investment from the present USD 1.1 billion mark.

There is no dearth of goodwill between the two countries. During the Sino-Vietnam war in 1979, India had extended total diplomatic support to Hanoi. Similarly, Vietnam has supported India’s bid for permanent membership of the United Nations Security Council. Even in the face of stiff Chinese opposition, Hanoi has given a two year extension to India’s ONGC Videsh Ltd to explore oil and gas in blocks 127 and 128 off its southern coast, which China claims.

Political structures of the two countries differ fundamentally. But the Communist Party of Vietnam has made multilateralism the cornerstone of its foreign policy. This holds out bright prospects for India-Vietnam cooperation.