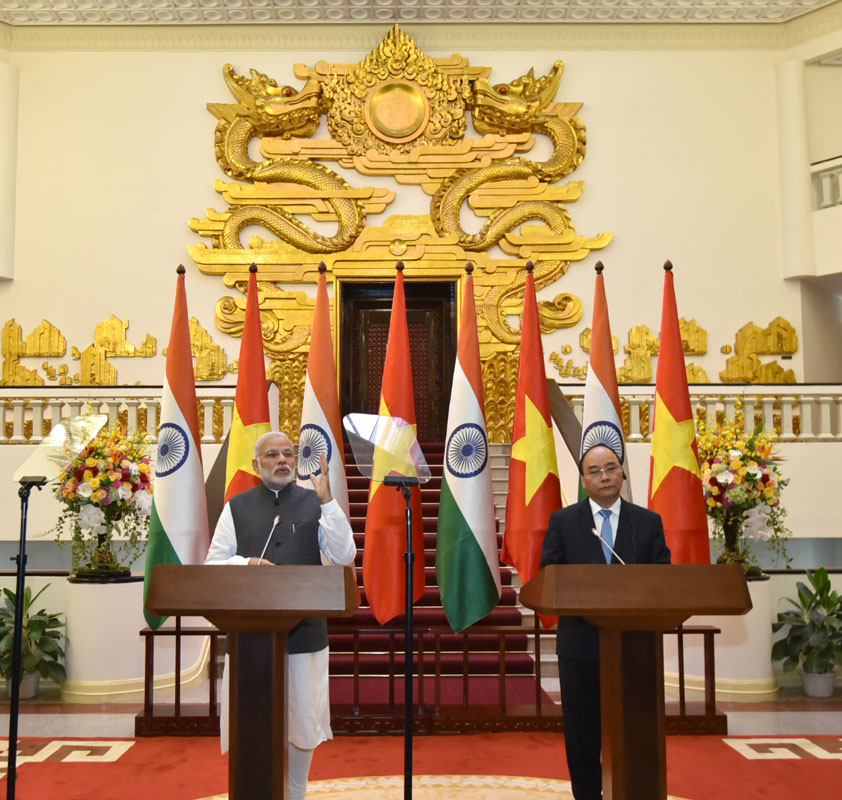 India’s foreign policy towards East Asia has witnessed a marked shift over the last two years, with the government intent on transforming India’s relations with this part of the world under its “Act East” policy. Vietnam is, of course, one of the East Asia Countries which has received a special place in the list of India’s foreign policy priorities, given its profound significance in India’s strategic and economic interests.

This became evident when President Pranab Mukherjee and External Affair Minister Sushma Swaraj visited Vietnam respectively in 2014. In the same year, Delhi hosted Vietnam’s Prime Minister Nguyen Tan Dung. The just concluded visit of PM Modi to Vietnam, first in the last fifteen years by an Indian Prime Minister, is being viewed to have finally led the foundation for the beginning of a new chapter in the cherished relationship between the two countries.

While Defence cooperation has been an important cornerstone of the strategic partnership between the two countries for the last many years, New Delhi and Hanoi have taken several steps to expand their cooperation in the recent time. During Pranab Mukherjee’s visit, India provided a credit line of US $ 100 million for defence procurement.

The two countries signed a vision statement for next five years in 2015 and a MoU on cooperation between the coast guards of the two countries. During his two day visit Prime Minister Modi announced extending a new defence credit line of $500 million and elevated the strategic partnership to the comprehensive strategic partnership, signifying India’s deep commitment to help Vietnam to build its defence capabilities.

The deepening defence engagement between India and Vietnam indeed is the reflection of India’s deeply interested in actively participating in shaping the political security order in Asia-Pacific. In so doing, the Indian strategic community believes that a strong defence relationship with Vietnam can prove a huge strategic asset for India, so far as its interests in the South China Sea are concerned. As About 50 per cent of its trade transits through the South China Sea, New Delhi needs foster security ties Hanoi to ensure that there is absolute freedom of navigation in this part of the world.

At the same time, as Vietnam has a territorial dispute with China over the Paracel islands in the South China Sea; Beijing has in the past declared India’s oil exploration activities with Vietnam as illegal, both the countries have the shared interest in containing China’s efforts to convert the South China Sea into as its exclusive zone of influence. Certainly, the recent verdict of a United National court rejecting China’s claim over the disputed territories’ with Philippines is very significant for India and Vietnam to further speed up their engagement in this regard. Prime Minister Modi’s visit to Vietnam on his way to attend G-20 meeting also gave a clear signal of India’s desire to use this verdict in consolidating its position in this region.

As the US has always wanted India to become a part of its containment policy against China, the recent orientation in India’s policy under the Act East policy would help New Delhi to cement its ties with the US. As Vietnam has emerged one of the largest arms imports in the world, India is focused on transforming its status of a defence importer into that of a defence exporter by selling arms to that country. On the other hand, this would help Vietnam to improve its defence prowess, as well.

Ever since India initiated the process of economic reforms in the 1990s, New Delhi and Hanoi have expanded economic cooperation, with trade with the two countries having reached $8.03 billion in 2014. The Modi government’s Act East policy is further focused on strengthening the ties in this area, with the aim of increasing the current volume of bilateral trade to a tune of $15 billion. During Modi’s visit, the two countries signed an agreement under which India’s Larsen & Toubro shall design and build vessels for the Vietnam Coast Guard, and to transfer shipbuilding technologies to Vietnam. India has also offered to discuss a line of credit of US$300 million in the textile sector.

Energy is another area which is a crucial aspect of the relationship between the two countries. As India needs to find viable sources of energy to sustain and intensify its economic growth, it attaches high importance to Vietnam in its energy policy.  Thus, while India’s ONGC Videsh has been working with Vietnam in oil exploration activates, the award of a US$ 1.8 billion thermal power project to India’s Tata Power in Vietnam’s Soc Trang Province is seen to make an epoch-making shift in the energy relations between the two countries. Sections of Indian strategists also believe that intense engagement with Vietnam would help India to strength its presence in the ASEAN and other similar regional forums.

However, any analysis of the expanding India-Vietnam partnership should not blind us to the fact the future prospect of the relationship would also depend on how Vietnam and China continue to behave towards each other. This is because, despite two countries having territorial disputes in the South China Sea, Beijing and Hanoi have continued to have a robust economic relationship. In turn, it is highly unlikely that Vietnam will take any such step as can jeopardise its economic interests with China. Thus, it becomes imperative for India to take transformational measures to accelerate economic engagement with Vietnam and other East Asia countries. Consequently, this would enable India to effectively assert its rightful its position in Asia-Pacific at large.

Given the deep-rooted convergence of interests in many areas and a strong political commitment, it can be hoped that when India and Vietnam celebrate the 45th year of the establishment of their diplomatic ties in 2017, the relationship would be on a new high.

is an ICSSR Doctoral Fellow at the UGC Centre for Southern Asia Studies Programme at Pondicherry University.