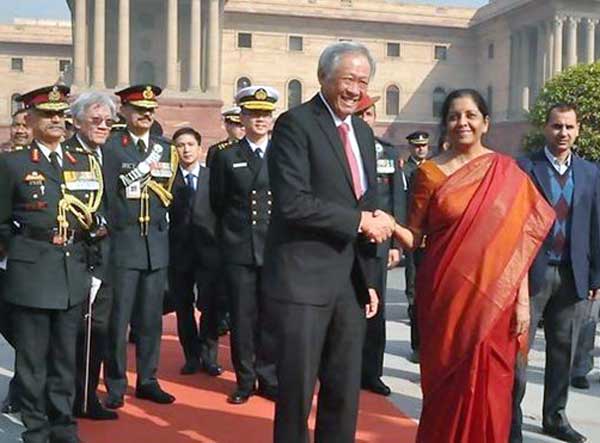 India and Singapore signed the India-Singapore Bilateral Agreement (Nov 29) for naval cooperation during the second Defence Minister’s Dialogue held in Delhi between the two countries. This agreement was concluded ahead of the 25th anniversary of the SIMBEX (Singapore-India Maritime Bilateral Exercise) that will be commemorated in 2018 and points to a significant enhancement of the naval cooperation between the two nations.

The naval agreement will enable increased cooperation in maritime security, joint exercises, temporary deployments from each other’s naval facilities and mutual logistics support. This is the first such agreement that India has signed with a regional maritime neighbour and will serve to increase the operational radius of the Indian navy in the maritime domain proximate to Singapore and the same option will be available to the Singapore navy in the Bay of Bengal area.

The defining characteristic for any navy is its ability to maintain a certain degree of ‘presence’ in the oceans and seas that it deems to be of relevance in the furtherance of the national interest or to support a regional / global objective, as for instance the concept of ‘good order’ at sea.

This naval ‘presence’ is a derivative of the reach of naval platforms (ships, submarines and aircraft) and the degree to which they can be sustained in distant areas. Thus a naval task force that has its own tankers and logistic ships can stay at sea for extended periods depending on the operational exigency that is undertaken. The availability of logistic support facilities in other countries will further enhance the ability of the navy to maintain appropriate ‘presence’ for extended periods of time and thereby increase the operational radius.

A recent example of such trans-border logistic arrangement enhancing operational radius is that of the Chinese navy acquiring a logistic hub in Djibouti – in the Horn of Africa. With this arrangement and other base facilities in the Persian Gulf region, Beijing has been able to significantly enhance its operational credibility in the Indian Ocean region.

While not quite similar, the India-Singapore logistic arrangement will provide certain military / naval options for both nations to advance their shared interests. These have been identified in a generic manner and include: regional security and the importance of maintaining maritime freedom of navigation and trade consistent with international law. The possibility of some initiatives such as the Code of Unplanned Encounters at Sea being extended to to all ASEAN countries and those who are part of the ASEAN plus Defence Ministers (ADMM) was also explored.

The sub-text of the bilateral agreement relates to the emphasis on like-minded nations arriving at a consensus to deal with the management of the global maritime domain in a consensual manner – where all of them are stakeholders. The unstated reference to China and its muscular assertiveness in the South China Sea would have been noted and appropriately interpreted in the region and beyond.

The naval agreement will add to the holistic military relationship and accord the bilateral with Singapore a special status in the Indian ‘Act East’ policy. It may be recalled that in the early 1990s, during the tenure of Prime Minister P V Narasimha Rao, Singapore, despite its relatively small size, played a very major role in India’s entry into the ASEAN fold and many mutually beneficial potentialities can be envisaged in the regional defence and diplomacy domain.

The second relevance is in the regional context, where China’s growing profile and its assertive orientation has successfully divided ASEAN. This discord is causing considerable disquiet in what has come to be known as the Indo-Pacific and India has been perceived as the alternative that can provide a degree of strategic balance. New Delhi is prudently responding to such overtures in a cautious and non-provocative manner and consolidating certain bilateral relationships in the maritime/naval domain in a determined manner.

This has been part of the Modi diplomacy at the regional level and this has clear implications for the global strategic arena, the third strand of relevance. Soon after assuming office in mid 2014, Prime Minister Narendra Modi introduced the concept of SAGAR (security and growth for all in the region) and the Indian Ocean focus was persuasive.

However, India has not been able to invest the kind of human and fiscal resources to make this a major success story – but the seeds have been planted. Partnering with like-minded nations and showing tangible and mutually beneficial policy options will enhance India’s credibility as an equitable security partner – and this would be in sharp contrast to the regional perception about China.

India and Singapore see China as a major bilateral partner and seek to maintain a robust and stable relationship with Beijing. However both nations would like this relationship with China to be cognizant of their respective sovereignty, diplomatic propriety and politico-military sensitivities .

India’s Defence Minister Nirmala Sitharaman should prioritize this engagement with Singapore and impart it with the defence diplomacy content that could serve as template for other such bilateral.

Courtesy: With permission reproduced from www.southasiamonitor.org

One thought on “India-Singapore naval agreement: Significance beyond the bilateral”