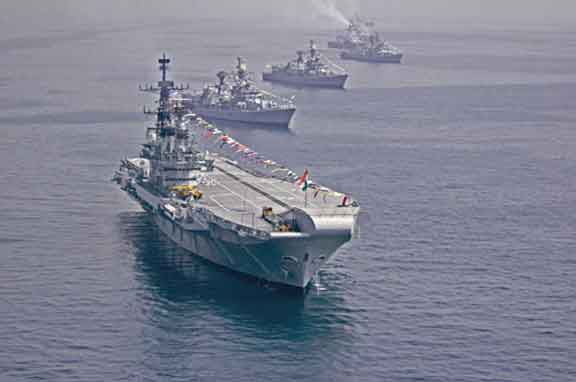 Daanish Gill in his piece – “India’s Dilemma – A Maritime or Continental Power‘[1] frames his argument wishing to drive home one idea.  Rather than framing his arguments in a manner that takes into account India’s historical realities, the international environment and domestic priorities and the basic elements of military power; he demolishes, bends and creates them to advance his idea. My refutation of Gill is threefold.

First, Gill’s historical point is that India is a continental power which can survive a defeat at sea but not at land.

Second, his assessment of the international environment (which incidentally flows from his historical belief and not even assessment, let alone contemporary trends) is that India’s decisive battles in the future will be fought on land.

Third, his assessment vis a vis the instruments of military power is that the Army must remain India’s most favoured service and that investments within specific arms like the artillery should be a higher priority for India rather than investing in its Navy.

The first point – that India has historically been preoccupied by land based threats is indeed correct.[2] This historic obsession has not been misplaced given the repeated invasions that it has been subjected to over the millennia from its North Western frontiers. The emergence of Pakistan as a nation state located on that very ancient pathway of invaders has given a solidified, concrete form to that threat. Northwards, in China lies the even stronger adversary. The historical lack of invasions from the North as noted by K.M Pannikar has lied not in the impenetrability of the mighty Himalayas but rather Tibet’s non organization as a great military state. Mountain barriers do not present an effective barrier against every kind of invasion. Nowhere has this been demonstrated more often and clearly than along India’s northwest frontiers where the Hindukush have acted as unsuccessful barriers whenever Afghanistan & Central Asia have been organized as powerful states.[3]

The Chinese annexation of Tibet as a buffer state then presents India with a landward dilemma on two fronts as it has never experienced before. And this is the reason than even today the Army is the biggest stakeholder in the defence budget having been allocated 53% of the total budget for 2015-16.[4] But this should not blind us to the fact that India’s continental mindset has been compounded a culture of sea blindness resulting in disproportionate amounts of attention to land based threats.[5]

The notion of hostile troops and armoured columns streaming across borders present a visceral image that easily excites the imagination. The seas though are a vast, featureless expanse with no fixed borders to defend or great sites of naval battles (all remains of which submerge beneath the waves). This helps explain why politicians and strategic thinkers find it tougher to think strategically about and mobilize support for operations in the maritime domain vis a vis the land or even airspace. True, India has a land frontier of 15,200 kilometers but it also possesses a coastline 7,500 km long with over 1,200 islands and an Exclusive Economic Zone of 2 million sq. km.[6]

The anticipated addition of 1.2 million sq.km. to India’s continental shelf if India’s claims are accepted by the United Nations Commission on the Limits of the Continental Shelf would make its seabed area almost equal to its land area.[7]

Gill uses the terminology of Balance of Consequences to make his point about how India could survive a defeat at sea but not at land. Using the very same logic one would do well to remember that all of India’s historical landward conquests have only ever led to temporary convulsions before the conqueror was assimilated into India’s general pattern of local civilization.[8] Conquest by sea (most prominently the British) however did not follow that example.

Moving to the second point if Mr Gill’s assessment vis a vis historical factors was partially correct (in its conclusions and not reasons at that) his assessment does not address the relevant trends and drivers even remotely when it comes to the international environment & domestic priorities. Post 1990 India has rejected economic patterns of growth that are inward looking resulting in its accelerating integration in the global economy.  India’s ‘sea dependence’ for oil is about 93%.[9] En route to becoming the 4th largest economy in the world by 2020 India’s annual oil consumption will hit 245 million tons before becoming the world’s largest importer of oil by 2050.[10] Today, over 70% of its trade by value and 90% by volume is carried by sea.[11]

The Indian Ocean is the medium through which the bulk of India’s vast trade makes its way to markets worldover.[12] The recently concluded International Fleet Review saw Prime Minister Modi emphasize the centrality of the oceans for the prosperity & security of India.[13] Hence K Vaidya’s observation, “even if we do not rule the waves of all the five oceans of the world, we must at least rule the waves of the Indian Ocean…the Indian Ocean must become an Indian Lake.”[14] Continued investment in and development of the Navy then is clearly an indispensable requirement in this regard.

Third, in insisting upon a prioritization of the specific arm of artillery over the Navy generally, Gill’s views are a throwback to Second Generation Warfare. This  age of warfare was shaped in response to the development of the rifled musket, the breech loader, machine gun and indirect fire. Consequently it was marked by linear tactics which emphasized mass firepower in place massed manpower.[15]

Important as the lessons of even this era remain they cannot be taken as the basis for undertaking force structuring decisions across services. Not surprisingly, the historical examples cited by him to support his argument are rooted in the Franco Prussian War of 1870 & early World War I, the quintessential examples of Second Generation Warfare conflicts. In any eventuality a comparison involving Germany examples is not merited owing to dramatically different geographic dispositions of the two which prevent the divination of generalized conclusions. As James R. Holmes notes India’s geographic position ranks “somewhere between Kaiser’s Germany, for which geography was a curse, and for the USA, for which it was a blessing.”[16]

Gill’s explanation of India’s (supposed) historical trait of never recovering lost ground (offering the example of Aksai Chin) being caused by a lack of military capabilities though is simply grasping at straws. The equivocation ignores that such a decision (while influenced by military considerations) is a political one. Gill supposes that having an army strong in artillery will somehow prevent India from losing ground in the first place, a proposition built on sand with no causative links to the factors actually responsible. This is a typical of what Zorawar Daulet Singh describes as the failure of continentalists to, “internalise the implications of a postnuclear high-technological environment, where deterrence must be the principal purpose of military strategy”.[17]

Enhancing investments in the artillery (no matter how intensive) can at the end of the day only generate improvements that can be felt tactically or operationally at best and not at the strategic level. Artillery by making use of a combination of cannons, rockets & missiles can disrupt, deny, divert & destroy hostile targets. These are all tasks that can be fulfilled by naval forces as well. Furthermore they offer much greater scope for engaging in Compellance, Coercion and Escalation. By virtue of their access, mobility and reach naval task forces offer immense flexibility in the application of force. Naval forces thus are capable of making their influence felt of land directly & indirectly. Direct influence can be exercised by striking from the sea by delivering ordnance by ship, air or under the sea or transporting land forces onto enemy territory. Indirect influence may be exercised by shaping the maritime environment by engaging in sea denial, trade warfare or mounting a blockade.

All these factors do not address specifically the strategic use & role of navies. In addition to the offensive naval role of Interdicting of Enemy Sea Lines of Communication just as important is the naval role in protecting friendly Sea Lines of Communication upon which sea trade, a nations economic lifeline so critically depends. Further, a navy offers the kind of versatility in its employment (with its benign, diplomatic, constabulary & military roles) that is unmatched across any other service. Returning to the point on deterrence as noted by Gerson & Whiteneck naval forces serve a unique role that no other service can. The Air force cannot loiter though it can be minimally intrusive, the Army can loiter but not be minimally intrusive. Naval forces alone have the capability to accomplish both simultaneously[18] and hence create options for influencing an opponent’s conduct which other services simply cannot.

[2]Sureesh Mehta, ‘Changing Roles of Navies in the Contemporary World Order with Specific Reference to the Indian Navy,’ Journal of Defence Studies, 3(2), 2009.

[15]William S Lind, Keith Nightingale, John F Schmitt, Joseph W Sutton, ‘THE CHANGING FACE OF WAR     – INTO THE FOURTH GENERATION,’, Available At: http://www.mca-marines.org/files/The%20Changing%20Face%20of%20War%20-%20Into%20the%20Fourth%20Generation.pdf (Herein I use this framework without taking a position upon its validity.)

is a student at the NALSAR University of Law and a freelance writer on geopolitical and international affairs.