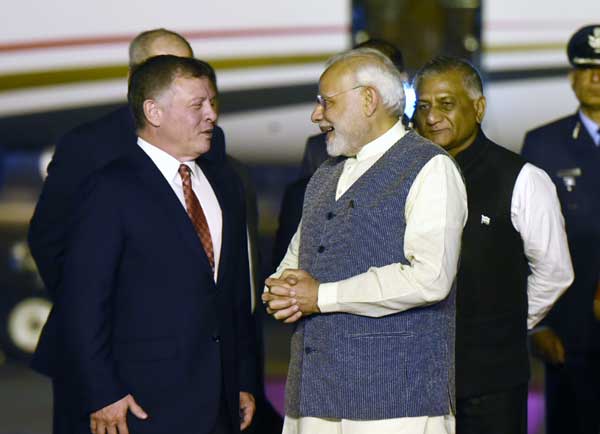 The three-day visit by King Abdullah II bin Al-Hussein of Jordan to India starting February 27, 2018 is testimony that India’s “Think West” policy, like its “Act East” initiative, is progressively getting robust and vigorous. The Jordanian King’s visit, only his second to India, that too after more than a decade, takes place within a few weeks of Prime Minister Modi’s transit through Amman to Palestine. King Abdullah’s visit comes on the heels of the highly productive and successful visit of Iran’s President Hassan Rouhani and Prime Minister Modi’s significant visits to four countries of West Asia, which, in addition to Jordan, included Palestine (the first ever visit by an Indian prime minister), the United Arab Emirates and Oman. All this activity in February 2018 took place in the wake of a hugely rewarding and substantive six-day visit by Israeli Prime Minister Benjamin Netanyahu, the second by an Israeli prime minister to India since diplomatic relations were established between the two countries 26 years ago. Modi himself had undertaken the first ever and path-breaking visit by an Indian prime minister to Israel in July 2017.

India and Jordan established diplomatic relations in 1950 after India became a Republic, although the first bilateral agreement on cooperation and friendly relations was entered into soon after Indian independence in 1947. The exchange of bilateral visits at high political and senior official levels declined significantly after King Abdullah’s productive visit in 2006. The relationship has failed to realize the huge, untapped potential.

Recent years have, however, witnessed a decisive impetus to the bilateral partnership. The first ever visit by an Indian Head of State to Jordan took place in 2015. This provided a huge impetus to bilateral engagement in a wide range of areas. Prime Minister Modi’s visit to Jordan in early February 2018 occurred 30 years after Prime Minister Rajiv Gandhi’s visit to Amman in 1988. King Abdullah had described Prime Minister Modi’s brief transit visit to Amman earlier this month as the beginning of a new chapter in bilateral ties. It is a measure of his conviction in the promise of this engagement that the King has decided to pay a visit to India within 20 days of his meeting with Modi in Jordan.

The visit by King Abdullah II during which he is expected to be accompanied by several Ministers and a high powered business delegation is likely to provide a shot in the arm to the relationship between India and Jordan. It is expected that discussions during the visit will focus on a wide variety of issues and Agreements will be signed in several significant areas including trade, investment, tourism, cultural exchanges, and intelligence and security cooperation.

Both India and Jordan face the common threat of terrorism and extremism. It has been reported that Prime Minister Modi and King Abdullah II will address an event themed on measures against radicalisation of youth. This reflects their conviction that the scourge of terrorism and violent extremism cannot be dealt with by force alone but that a counter-ideology of amity, concord and harmony is urgently needed. Both countries share the view that nations must coordinate their positions to fight against the misuse of religion by groups and countries for inciting hatred and justifying terrorism. King Abdullah has established himself as a staunch opponent of Takfiri ideology – the so-called radical practice of declaring one’s enemies to be infidels – which has earned him wide respect and support around the world. He has recently launched the Aqaba process to promote deradicalisation in which India is an active participant.

During her visit to India in 2006 accompanying King Abdullah II, Queen Rania had described India as the “rising star of Asia” and Jordan’s “natural partner”. On India’s role in the Middle East, she had stated that the region “yearns for India to play a greater role”, and added that “India has an important role because you have always had contact with us and understand our sensitivities.” Jordanian Foreign Minister Ayman Safadi supplemented this suggestion when he asserted during his December 2017 visit to New Delhi that Jordan would like India to be more pro-active and steadfast in promoting peace and stability in the region. An authoritative voice in the Jordanian establishment has argued that Jordan “needs India to exert its high offices and help us with all its moral, political and economic weight.” This refrain for India to play a more decisive and resolute role to bring peace and stability to West Asia has risen further in recent years, not only from Jordan but from several other countries from different sides of the divide.

According to informed sources, one of the most significant Agreements to be signed between the two countries during King Abdullah’s visit will be in the area of security and defence. In addition to joint exercises, training and intelligence sharing, the Pact is also likely to include capacity building, cyber security, supply and maintenance of defence equipment and hardware.

India is Jordan’s fourth largest trade partner after Iraq, Saudi Arabia and China. Bilateral trade totalled USD 2.2 billion in 2014-15. India exported 1.4 billion worth of goods to Jordan, and imported 857 million. Since 2012-13, the balance of trade has been in India’s favour. Trade volume over the last two years has declined on account of weak international performance. A target of USD five billion has been set for 2025.

During his visit to India in December, 2017, the Jordanian Foreign Minister contended that the Middle East is facing tremendous challenges which are impacting global security. He said that terrorism, lack of employment opportunity, weak governance, conflicts and civil war are depriving the region and its people of their right to live in peace and prosperity. India and Jordan can collaborate effectively to mitigate the adverse impact of these negative developments.

Political, security and economic developments in West Asia over the last few years are helping the two countries re-discover each other. The rapidly transforming political and security dynamics in the Middle East with US President Donald Trump cozying up to Saudi Arabia and coming out openly in support of Israel while making threatening pronouncements about jettisoning the nuclear deal with Iran have introduced major uncertainties in the region. The Shia-Sunni divide between Iran and some Sunni states led by Saudi Arabia and the Israel-Iran rift have forced countries to look around for reliable and trustworthy partners. Under these circumstances, India, which is one of the few countries that maintains strong and vibrant ties with Washington DC, Riyadh and Tel Aviv as well as with Tehran, Abu Dhabi and Moscow, has emerged as a partner of choice for several countries in the region. Jordan is one of the few countries in West Asia that maintains diplomatic relations with Israel and has cordial relations with the West as well as its neighbours. India and Jordan can be termed as natural allies as both countries are peaceful, stable and are witnessing rapid economic growth and have similar positions on regional and global affairs.

King Abdullah II’s forthcoming visit to India represents an opportunity to catapult the relationship to the next higher level in strategic, security, political, energy, trade, investment and economic cooperation.

Courtesy: With permission reproduced from  www.idsa.in