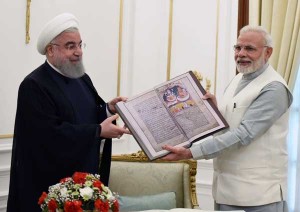 The US has withdrawn from the US-Iran nuclear deal arguing that the deal is imbalanced and inequitable. Iran says she has stuck to the terms of the deal but would resume enrichment of uranium for manufacturing nuclear device since the US has broken the deal. The US is determined to coerce Iran into abandoning the enrichment of uranium. One coercive tactic used by the Trump regime is of imposing sanctions on Iranian oil supplies. The US has warned major oil customers of Iran like China, India and Japan not to buy Iranian oil because, it alleges,Iran uses oil booty to fuel terrorism sponsored by Iranian terrorists in the Middle East particularly the Hamas.

India is on the horns of a dilemma. Iran is her major supplier of oil and she is among the oil-hungry developing countries. It is said that the US has promised to provide India with nuclear energy to supplement her energy requirements in the prospect of India stopping oil imports from Iran. It may be so, but the question is of relations with an ancient country with which India is bound by numerous ties.

With the rise of a theocratic regime in Teheran in 1979 and the type of radicalism it espoused, two countries, namely the US and the Saudi Kingdom came directly into the focus of its impact. Iran’s hatred for the US is rooted in how the US brazenly suppressed the populist Musaddegh-led leftist movement of the 1950s. Iran felt that the US was obstructing her aspiration of nationalizing the oil industry, the backbone of her economy. The Shah played in the hands of his American handlers but only to lose his crown and the kingdom at the end of the day.

Iran’s race-based and ethno-sectarian rivalry with the Saudis is almost proverbial.  She labelled the Saudi monarchs as the stooge of America that wants to impose its hegemony on the entire Gulf region. India did not find it necessary to question Khomeini’s political philosophy. However, when the Iranian patriarch pontificated that Islamists had their religious duty to replace all world religions with Islam, India looked at Islamic Iran with caution because a vast majority of Indian Muslims professes the Shia’ faith and thry have been nationalists by and large from Congress calculation.

Theocratic Iran’s animus against Israel, a country with which she does not have a common border or a clash of commercial interests, is for two reasons. One is that Iran thinks the majority of Jewish members in the American Congress play a crucial role in consolidating American-Saudi camaraderie to the detriment of Iran. Many top American business magnates and oil barons have huge economic interests in the oil-rich Gulf. The second reason is that knowing the Arab nations are soft-paddling with the State of Israel Iranian clergy want to tell the Muslim world that they are more Islamic than any other Muslim state despite descending from non-Semitic ethnicity.

Notwithstanding the nitty-gritty of the Islamic Republic of Iran’s political and religious prognosis, India adopted the route of trade and commerce for perpetuating her ties with the important Gulf nation without getting mired into her religio-political entanglement. Of course, India’s priority was uninterrupted oil supplies from Iran.  Iran’s trade with India exceeded US$13 billion in 2007, an 80 per cent increase in trade volume within a year. For trade conducted via third party countries such as the UAE this figure reaches $30 billion.

With crude oil imports from Iran increasing by 16.5 per cent, Iran emerged as India’s second-largest oil supplier.  About 40 per cent of the refined oil consumed by India is imported from Iran. In June 2009, Indian oil companies announced their plan to invest US$ 5 billion in developing an Iranian gas field in the Persian Gulf. Taking note of expanding oil trade between India and Iran, in 2010 the US officials warned New Delhi that Indian companies using the Asian Clearing Union (ACU) for financial transactions with Iran run the risk of violating a recent US law that bans international firms from doing business with Iranian banks and her oil and gas sector and that Indian companies dealing with Iran in this manner may be barred from the US. The United States criticized the ACU for insufficient transparency and suspected the assets being funnelled to “blacklisted repressive organizations”.

This made the Reserve Bank of India issue instructions to the country’s lenders to stop processing current-account transactions with Iran using the ACU channel. Notwithstanding this hurdle, India objected to further American sanctions on Iran in 2010 and stated that she would continue to invest in Iranian oil and do business. An Indian foreign policy strategist dismissed the idea that a nuclear-armed Iran was a threat to India.   Despite increased pressure by the US and the EU and a significant reduction in oil imports from Iranian oil fields in 2012, leading political figures in India stated that they were not willing to freeze trade relations altogether. On the contrary, they aimed at expanding the commodity trade with the Islamic republic.

Though the overall history of the Indo-Iranian relationship is not dull and unsavoury yet there have been intermittent periods of closeness as well as of distancing from each other temporarily. This is owing to the complexities arising out of shifting strategic, economic and political interests. Developing countries have gone through variegated experiences and have also learnt how to harmonize their national interests with the harshness of the realpolitik.

Iran and India both considered the rise of Pakistan-supported Sunni extremist Afghan Taliban in the 1990s as a threat to the well-being of their societies. Both supported the Northern Alliance in Afghanistan against the rabid Taliban regime. The two countries collaborated in supporting the broad-based anti-Taliban government of President Ashraf Ghani, which has the backing of the United States. They have signed a defence cooperation agreement in December 2002. Iran objected to Pakistan’s attempts to draft anti-India resolutions at international organizations such as the OIC  in 1994. Reciprocating this goodwill gesture, India supported Iran’s inclusion as an observer state in the South Asian Association for Regional Cooperation (SAARC).

Some Iran watchers believe that India withdrew from the IPI gas pipeline project because the US had agreed to provide India with a nuclear energy source. This thinking emanated from a reckless statement of a frustrated Pakistani diplomat given to the Iranian newspaper Mehr. The fact is that there were differences in the end cost of gas supplied to India under the IPI project. More importantly, India had many misgivings about the security of the pipeline passing through the turbulent Baluchistan province of Pakistan. However, there have been occasions when differences in the policy perception of the two countries interacted. When India voted against Iran in IAEA, Iranian Supreme Religious leader Ayatollah Khamenei broadcast an appeal to the Muslims of the world to “support the struggle of Kashmiris against oppression.” New Delhi had to summon the Iranian Ambassador for lodging a protest. Iran has been a votary to anti-India resolutions on Kashmir recurrently passed by the OIC.

These hiccups notwithstanding, there is a wide spectrum of cooperation and collaboration between the two countries in a host of areas. Iran-India collaboration in infrastructure building is conspicuous by its political and strategic outreach. The Zaranj-Delaram Highway built with India’s financial support gives India access to Afghanistan bypassing Pakistan. The Iranian port of Chahbahar in the Gulf of Oman is jointly developed by the two countries. India plans to invest 20 billion US dollars in the prestigious project. The port will give India access to the energy resources in Iran and the Central Asian states. India, Iran and Afghanistan have signed an agreement to give Indian goods, heading for Central Asia and Afghanistan, preferential treatment and tariff reductions at Chabahar. Iran and India are jointly upgrading the Chabahar-Milak road and India’s BRO is laying the 213 km Zaranj-Delaram road. The Chabahar port project is Iran’s chance to end its US-sponsored economic isolation. Along with Bandar Abbas, Chabahar is the Iranian extra port on the North-South corridor. A strategic partnership between India, Iran and Russia is intended to establish a multi-modal transport link connecting Mumbai with St Petersburg, providing Europe and the former Soviet republics of Central Asia access to Asia and vice versa.

Of late Iran has resorted to her known behavioral whims and has decided to invite China as partner in the Chabahar port project. Not only that, she has also made known that she would herself undertake the building of Chabahar  – Heart land link and sideline India from the project. Iran has also second thought about leasing of Farzad gas field to India as agreed previously and now she says she would herself take up the project.