Home  >  Spotlights  > Geopolitics  >  India distributes its strategic dependence: Prioritising US, but no dilution with Russia

India distributes its strategic dependence: Prioritising US, but no dilution with Russia 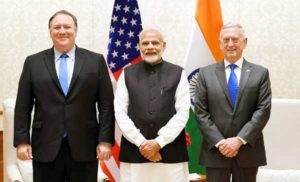 The twice-postponed 2 plus 2 talks between India and the USA which brought the foreign and defence ministers of both countries together at one forum concluded on an upbeat note in New Delhi on September 6. This was welcome, given the anxiety which preceded the meeting and a sense that the divergences between the two nations on contentious issues such as Russia and Iran would muddy the waters.

The final statement ticked all the right boxes. The most tangible outcome was the inking by India of a communication agreement with a longish acronym – COMCASA (Communications Compatibility and Security Agreement).  This is one of four foundational agreements that the US enters into with all its allies and major defence partners to ensure that appropriate security protocols and operational compatibility procedures are in place.

It is instructive to note that the USA had agreed to a comprehensive defence cooperation agreement with India as far back as June 2005 – a month before the more ambitious civilian-nuclear agreement had even been mooted – and it is only 13 years later that there is some visible movement on this track.

This hesitation and reluctance on the Indian side to enter into a robust and dynamic engagement framework with the USA stems from its natural preference for remaining ‘non-aligned,’ in the military connotation of the term, as also a certain diffidence about being seen as being too close to Uncle Sam.

It may be conjectured that this was the preferred Congress-Left parties’ global orientation for decades, after India acquired independence in August 1947. The popular perception for previous generations in India was an image of the “Ugly American” that had its Korea-Vietnam and related Cold-War associations. However, when India, with Prime Minister Jawaharlal Nehru at the helm, was militarily humiliated by China in 1962, the country it turned to for help was the USA. President John Kennedy was in the White House then and he was totally immersed in the unfolding Cuban missile crisis. Averting a global nuclear war was clearly and correctly so, the higher priority for the USA – than getting involved in the fine print of a complex territorial dispute between the two Asian giants – neither of which was particularly well disposed towards the leading ‘capitalist’ power.

The BJP as a party has been more forthcoming in endorsing a closer relationship with the USA and this was evident in the manner that then Prime Minister Atal Bihari Vajpayee referred to the India-US bilateral relationship as one between “natural allies”.

It merits recall that while Prime Minister Manmohan Singh  was able to bring about the rapprochement  with the USA over the intensely contested nuclear issue in the fall of 2008, the Congress as a party has always been reticent in publicly acknowledging India’s need to obtain US support and cooperation in the defence-security domain. In keeping with the Vajpayee template, the Modi government has prioritized the relationship with the USA and the innovative manner in which the 2 plus 2 has been evolved is a case in point. The COMCASA apart, the two nations have also agreed to conduct their first tri-service military exercise off the Indian east coast in 2019.

That this cooperation with the USA does not imply a dilution of the India-Russia relationship is reflected in the fact that the Indian Foreign Minister Sushma  Swaraj was in Moscow (Sep 14)  to further technical and economic cooperation. Later, in October, Russian President Vladimir Putin will be in India for the annual bilateral summit with Prime Minister Narendra Modi.

The USA is emerging as a major military supplier for India and, over the last decade, from zero the total value of the defence equipment agreements concluded between them has crossed USD15 billion. India, it may be averred, is distributing its strategic dependence on both Moscow and Washington.