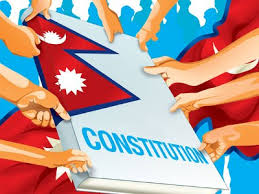 Nepal has a constitution at last. On September 20, 2015, an overwhelming majority of an elected Constituent Assembly voted in favour of a constitution ushering in a federal, democratic, secular republic.

Following the end of the Maoist insurgency, for the past seven years political parties had been debating ad nauseum a new draft constitution which would transform Nepal into a federation with full devolution of powers and equality to all sections of its population, including the long marginalized Madheshis and Tharus in southern Nepal, bordering India; the Dalits, Janjatis and women.

The basis for determining seat entitlements, both under the first-past-the-post and under the proportional representation formulae, had also been changed to ensure that the Tarai and Tharu representation would be substantially less than what their populations would entitle them to.

The first Constituent Assembly was dissolved in 2012 without producing an agreed statute. Fresh elections were then held, and a new CA with a different political complexion came into being, in which the pro-ethnic based, pro-federal parties (Madheshis as well as well as Maoists) were overtaken by the Nepali Congress (NC) and the Communist Party of Nepal (Unified Marxist–Leninist).

There was painful but recognizable progress by March 2015, with encouraging convergence in the approaches of the major parties, including the Madheshis, especially on the vexed question of number and boundary delineation of provinces.

Then came the devastating earthquake of April 2015. It seemed to be a welcome trigger to speed things up on the constitution front, and leaders of the four major parties, including the Nepali Congress, CPN (UML), Maoists and the Madheshis represented by Bijay Gachchedar, agreed on a new draft constitution.

This was welcomed in most quarters. As the major parties went ahead with an attempt to push it through the CA, doubts about whether it was seeking to significantly reverse earlier agreements on empowering hitherto marginalized groups spread.

The long-oppressed Tharus, who had been asking for a province of their own, were being given nothing, the Madheshis who had expected a provincial status in an east-west stretch parallel to the Indian border, recognizing their ethnicity and linguistic status, were instead asked to be content to be merged with a number of north-south provincial offerings in which they would be a minority as compared to the hill populations.

The basis for determining seat entitlements, both under the first-past-the-post and under the proportional representation formulae, had also been changed to ensure that the Tarai and Tharu representation would be substantially less than what their populations would entitle them to.

The Tarai-based representatives, including Gachhedar, therefore boycotted the voting.  Serious violence erupted in protests in the Tarai, even as the other three parties (NC, CPN-UML, and Maoist), confident of their combined numbers, proceeded   at astonishing speed to push their draft through, until its endorsement by more than a two-thirds majority by the CA and its formal promulgation on September 20.

…was there a master mind, some huge incentive, offered to these key players by some unseen force, internal or external, who was counting the possible strategic gains from the institutional re-orientation and its fallout?

Former Maoist prime minister Baburam Bhattarai’s comment as he came out of the CA after the promulgation was perhaps the most honest description of the appropriate national mood: “There is no room for celebration, when half of our population is unhappy with the constitution.

India, for its part, made no bones about its disappointment and concern, throughout the process and right up to and after promulgation, cautioning against a statute which was unacceptable to a large chunk of Nepal’s population as being non-durable, calling for flexibility and accommodation on the part of its proponents to ensure the broadest possible support, deploring the violence and unrest close to its borders, and conspicuously declining to congratulate Nepal on this achievement after it was finally announced.

India has more reasons than one to be seriously concerned – with the content of the constitution text, as much as the way it was rushed through. It is widely recognized, even in Nepal, that a small band of political leaders (K.P. Sharma Oli from the CPN (UML), Sher Bahadur Deuba from Nepali Congress and Prachanda from the Maoist party) were intent on pushing it through for their own political reasons, as it would enable Sushil Koirala to vacate the prime minister-position in favour of Oli, Deuba to take charge of the NC as party president, Koirala to become president of Nepal and Prachanda to regain power and political clout.

The suggested delineation formula would also safeguard the political fiefdoms of these and other key leaders instead of surrendering them to the Tharus and Madheshis. In the process, the unpalatable prospect of ethnicity/viability-based federalism which would have institutionally ended the centuries-old monopoly of power by a few upper caste communities from the hills, could be shelved indefinitely.

As Indian reservations became more strong, the added space for revival of the panchayat-era concept of nationalism – anti-Indianism to cement unity and safeguard the interests of the traditional elite in the power structure, opened up — for at least some of the key players. What better way of cutting India down to size than by ignoring its advice and having a democratically endorsed constitution of Nepal’s choosing, one moreover which was clearly to China’s liking?

Two big questions are also ripe for speculation. What was the real reason for Prachanda, he who had led the movement for a federal inclusive Nepal in the first CA for empowering the Madheshis and the downtrodden, to suddenly back this regressive document, despite the obvious political cost this would entail in terms of loss of credibility and future votes? Second, was there a master mind, some huge incentive, offered to these key players by some unseen force, internal or external, who was counting the possible strategic gains from the institutional re-orientation and its fallout?

The developments of the past few days may throw up a host of new challenges for Nepal, India and in the direction of India-Nepal relations. If unrest in the Tarai spirals out of control, India will have to review its options and priorities.

A new “twin pillar” policy embracing the Tarai belt and the power structure in Kathmandu may have to be evolved in the coming days. The China factor could well become more prominent again, as the India-Tarai-Kathmandu triangle becomes a living reality.

The visit by Indian Foreign Secretary S. Jaishankar to Kathmandu, barely a day before Nepal was all set to promulgate the Constitution, was not “too little too late”, or a strategic blunder as some have described it. It was made in the knowledge that there was little chance of Nepalese leaders heeding India’s advice at such a late stage.

The intention was to give to all concerned — the traditional elite in Nepal, the Madheshis and other underprivileged, Nepalese civil society — a public, high profile warning that Nepal could not hope to achieve a durable constitution, or for that matter meaningful development or peace with half the population not on board. There was also a subtext: India would not be a passive spectator if the Tarai unrest becomes a major security preoccupation for itself.

A new “twin pillar” policy embracing the Tarai belt and the power structure in Kathmandu may have to be evolved in the coming days. The China factor could well become more prominent again, as the India-Tarai-Kathmandu triangle becomes a living reality.

The positive atmosphere that had been built up after the Narendra Modi visits is already becoming a distant memory, and a review of India’s policies of generous support for Nepal’s development, and generally the spirit of non-reciprocity which has usually guided Indian actions in Nepal, is likely. How all this will affect the “special relationship” between India and Nepal, at the level of states and peoples, only time will tell.

is a former Indian ambassador to Nepal. He can be reached at krishnavrajan@yahoo.co.in

One thought on “India and Nepal: Review of policies likely”