India and Iran Resolve to Focus on Connectivity and Economic Cooperation 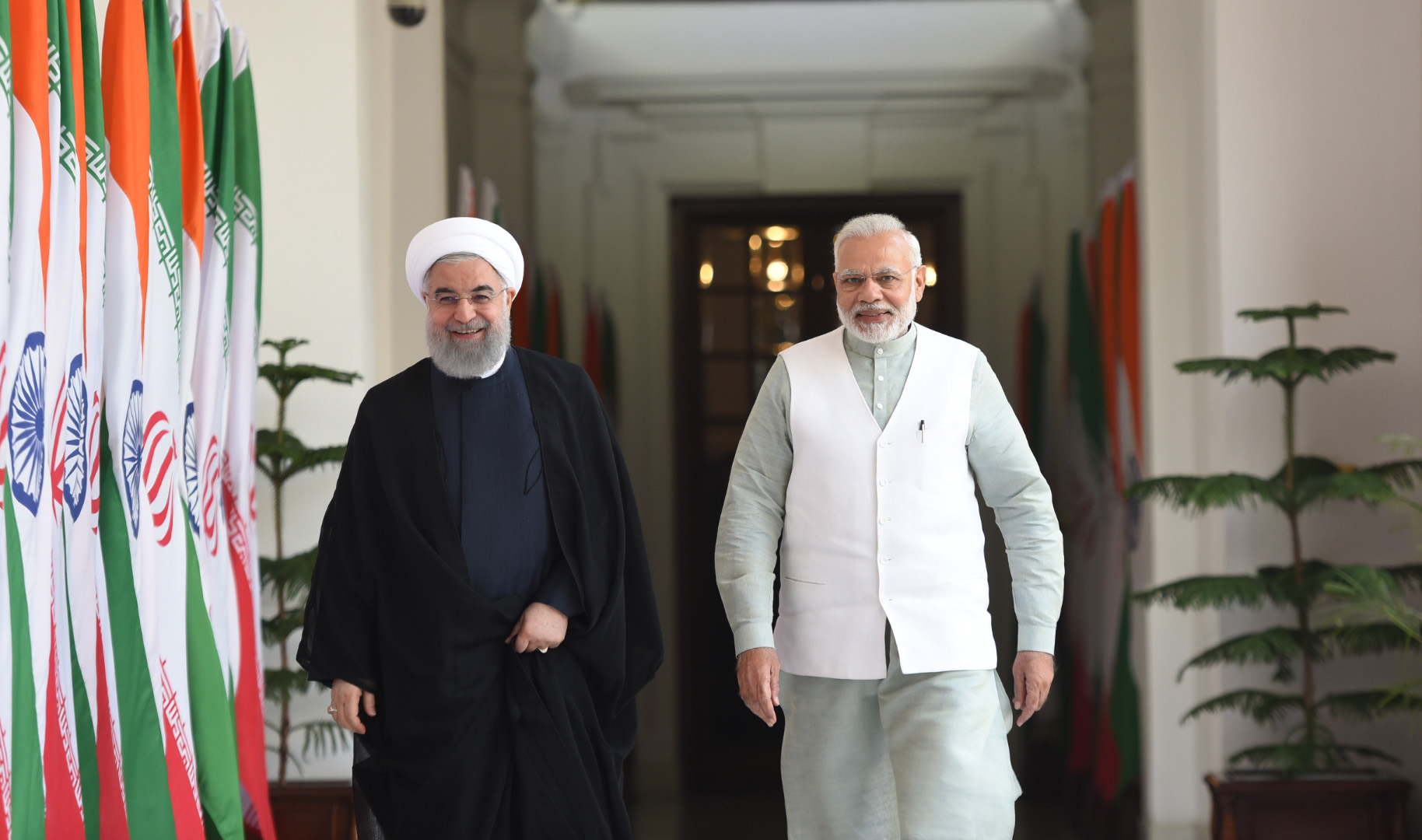 The Prime Minister Narendra Modi with the President of the Islamic Republic of Iran, Dr. Hassan Rouhani, at Hyderabad House, in New Delhi on February 17, 2018.

The three-day visit of Hassan Rouhani to India, his first after becoming President in 2013, is testimony that India’s ”Think West” Policy, like its ”Act East” Policy, is thriving and blooming. Rouhani’s sojourn came within a month of the highly successful and historic six-day visit to India of Benjamin Netanyahu, the Prime Minister of Israel, Iran’s implacable foe in the region. Netanyahu’s visit came a little over six months after Narendra Modi’s visit to Israel, the first by an Indian Prime Minister after the establishment of diplomatic relations in 1992. In addition, Rouhani’s visit came close on the heels of an extremely productive four-nation tour undertaken by Modi to West Asia where he visited Palestine (the first by an Indian PM), Oman, UAE and Jordan (in transit). The Kings of Saudi Arabia and Jordan are likely to visit India in the coming months. India is one of the few countries to have warm and mutually beneficial relations on all sides of the divide in West Asia including the Shia/Sunni split and the Iran/Israel rift.

Rouhani’s visit will give a decisive shot in the arm to India’s growing engagement with West Asia. This is Rouhani’s second trip to India, his first having been in his capacity as National Security Adviser to then President Mohammad Khatami during the latter’s visit as Chief Guest on India’s Republic Day in 2003. The significant and substantive ”Delhi Declaration” providing a visionary roadmap to bilateral relations was inked during that visit.

Rouhani’s visit provided a welcome opportunity to the two sides to give a vigorous push to bilateral ties in the areas of connectivity, energy, infrastructure, trade, investment, security, defence, culture and people-to-people contacts. The nine Agreements signed during the visit covering a wide gamut of issues including all the above subjects will provide a strong impetus to bilateral engagement. In addition, deliberations between the two leaders were helpful to develop understanding and iron over some wrinkles that have appeared in bilateral ties during recent years.

Rouhani’s presence in India was evidence of the keen interest that both countries have in promoting bilateral ties and taking them to the next higher level. Rouhani is under considerable pressure both on the domestic front, in political as well economic areas, and in the realm of Iran’s international ties. Rouhani’s administration was recently rocked by huge street protests and demonstrations in several cities against lack of employment, corruption and high prices. Rouhani had come to power in 2013 on the slogan of improving living conditions of the common citizens. He won a second term in 2017 on the rallying cry that the nuclear deal or Joint Comprehensive Plan of Action (JCPOA) signed with P5+1 in 2015 would result in increased investment from foreign countries, improve production and productivity, bring in new technology, create more jobs and be beneficial to the common people. This unfortunately has failed to materialise principally because of the aggressive and belligerent posture adopted by President Trump against the nuclear Agreement. This has dissuaded foreign investors from venturing into Iran till the situation becomes clearer.

As expected, connectivity through Chabahar port emerged as one of the most significant aspects of bilateral Talks. India’s recent accession to the Ashgabat Agreement in which Turkmenistan, Iran, Uzbekistan and Oman are members, and to the TIR Convention will help enhance its engagement with the region. Chabahar provides a strategic option to India to connect with Afghanistan and Central Asia and beyond by sidestepping an uncooperative Pakistan. An Agreement was signed to provisionally hand over the management of Chabahar to India for the next 18 months. Extension of this Agreement is expected to take place on the expiry of this period.

It is a matter of considerable satisfaction that the Trilateral Agreement on the use of Chabahar, which was signed during Modi’s visit to Tehran in May 2016 in the presence of the Iranian and Afghan Presidents, has been put into operation in a little more than a year. India has invested USD 85 million in upgrading the first phase of the port from 2.5 million tons to 8.5 million tons.

India has also committed to construct the railway line from Chabahar to Zahedan, which is close to Zaranj on the Afghanistan-Iran border. To maintain its credibility, India will need to ensure that there is no slackness in implementation of this element of the project.

Gwadar port in the Baluchistan province of Pakistan is barely a 100 kms away from Chabahar and is being developed by China. Chabahar will face stiff competition from Gwadar. India and Iran will have to make certain that to-and-fro business handled by Chabahar is significant. For Afghanistan, it could prove to be, as Modi said, ”a Golden Gateway.” Chabahar enjoys several advantages over Gwadar. Firstly, it is located in a peaceful region as opposed to Gwadar which is situated in a violent and terrorism prone province. The possibilities for establishing manufacturing and downstream petrochemical industries in Chabahar are much greater as ready, easy, cheap natural gas is available in plentiful in Iran. Above all, Chabahar is a natural harbour and can serve as the sourcing point for the International North-South Transport Corridor which has also been taken up much more seriously in recent years.

During Rouhani’s visit, it was decided that India will set up ”plants in sectors such as fertilizers, petrochemicals and metallurgy in Chabahar Free Trade Zone (FTZ) on terms mutually beneficial to the concerned parties.” This will be a win-win investment as it will promote India’s energy security while providing financial resources and employment opportunities to Iran. These ventures will also provide additional cargo and business for transportation, both in and out, to Chabahar port.

Discussions on the exploitation of Farzad B gas field, which was discovered by an Indian consortium comprising OVL (ONGC Videsh Ltd), Oil India Limited and Indian Oil Corporation in 2007, have been going on for the last many years. Its mention in the Joint Statement is significant as it implies that both sides wish to resolve the issue in the very near future.

Both sides agreed to facilitate issuance of visas to promote tourism and people-to-people contacts between the two countries. Obtaining visas for Indian citizens, even businessmen, to visit Iran has always been an extremely harrowing experience. Obtaining visas in the reverse direction has never been so difficult. It will be mutually beneficial if more businessmen and common people travel to each other’s countries. More frequent travel by Indian businessmen and people will provide a huge boost to Iran’s economy and also promote understanding and cooperation between the two countries.

The Agreement on Avoidance of Double taxation was signed to promote bilateral trade and investment. India has also decided to permit Indian investments in Iran in Indian rupees. Currently, this facility is available only for Bhutan and Nepal. This decision, which has been taken in view of the absence of international banking facilities in Iran as also to skirt the uncertainty due to continuing pressure by the United States on Iran, will go a long way in facilitating Indian investments in several areas in Iran. The opening of a CII Office in Iran last year can also be expected to give s strong boost to two way business and economic ties.

Bilateral cooperation in security, defence and fight against terrorism emerged as significant areas of discussion during Rouhani’s visit. A Bilateral Extradition Treaty was signed and it was also decided to have enhanced cooperation in the maritime domain. The two countries “agreed to hold dialogue to look into measures for cooperation in defence sphere, including port calls by naval ships, training and regular exchanges of defence delegations.”

Ensuring security and stability in Afghanistan, which is vital to peace in the region, poses a challenge to both India and Iran. Both countries desire peace in Afghanistan but their approaches are markedly different. India maintains that there cannot be a distinction between ”good Taliban” and ”bad Taliban.” It contends that terrorist attacks perpetrated by the Taliban and Haqqani network which enjoy safe havens in Pakistan are the root cause of the problem and that these groups cannot be a part of the solution. Moreover, it views the presence of US troops as beneficial since they maintain pressure on Pakistan to give up support for terrorist elements acting against Afghanistan. Iran’s position is quite different. It wants US troops to leave Afghanistan as soon as possible. In addition, it has expressed readiness to collaborate with Pakistan and China to bring the Taliban to the negotiating table.

Other challenges in bilateral relations relate to India’s growing ties with USA, Israel, Saudi Arabia and UAE, all of which are intractable rivals of Iran.

The language in the Joint Statement on India’s interest in becoming a permanent member of the UN Security Council reads as follows: ”President Rouhani acknowledges the aspiration of India to play a greater role in international fora.” This language is similar to that used in Joint Statements after meetings between Indian and Chinese leaders and is less than encouraging or satisfying.

Both India and Iran seem to have come to the conclusion that there are a large number of areas in which their interests coincide and converge. They also recognize that they have divergent views on some issues. They hence appear to have taken the decision to collaborate in spheres where they agree and hold frank and candid discussions on subjects where they have a difference of views while not allowing these issues to block or vitiate bilateral ties.

The seriousness of the two countries to strengthen bilateral engagement is evident from the decision to “further intensify and diversify the existing high-level engagement through frequent and wider range of bilateral exchanges at all levels. In this context, “it was decided to convene within this year the meeting of the India-Iran Joint Commission and all its Working Groups, Foreign Office Consultations, dialogue between defense and National Security Council structures of the two countries, Policy Planning dialogue, and to promote Parliamentary exchanges.”(Emphasis added).

Notwithstanding the fact that the two countries do not see eye to eye on some issues, India and Iran have decided to focus their energies on areas of concurrence and rapidly embark on a mutually beneficial and fruitful partnership.