Home  >  Spotlights  > Geopolitics  >  India and China: the “diplomacy of strings”

India and China: the “diplomacy of strings” 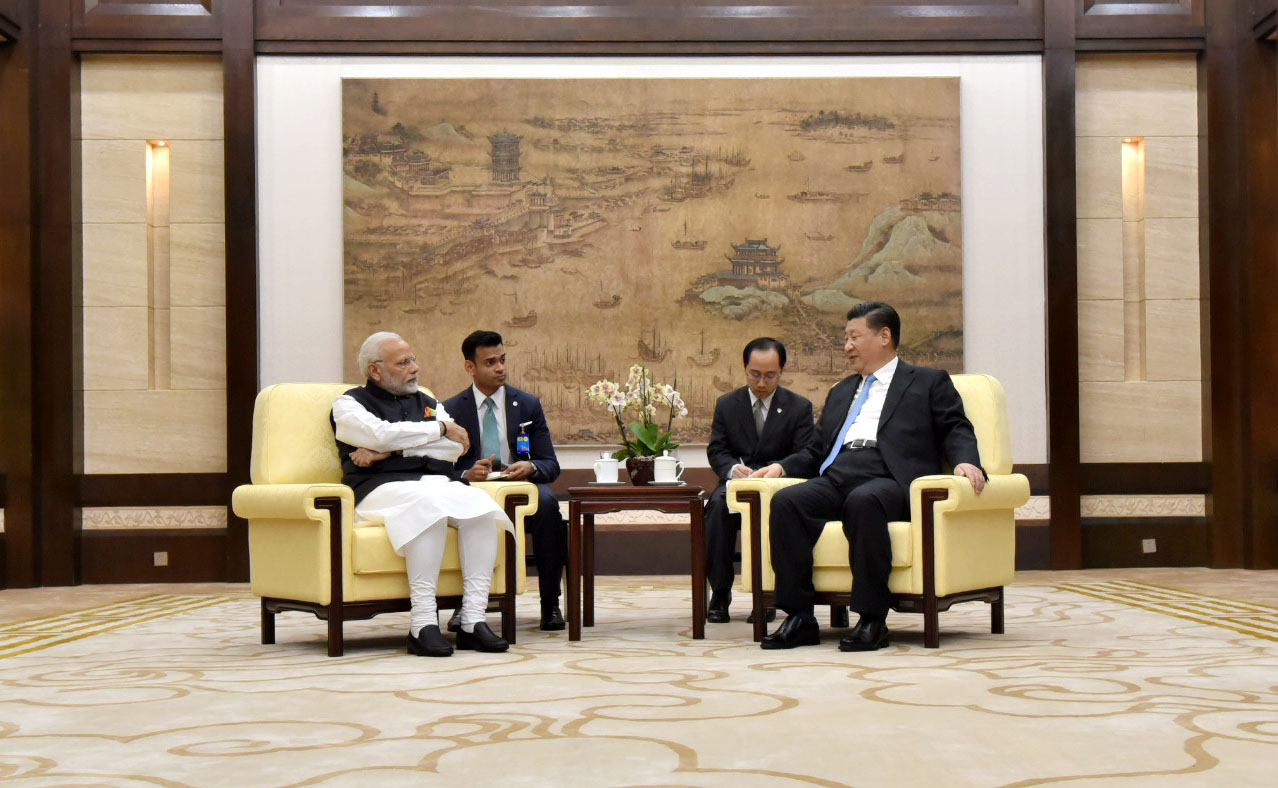 Last week, a news item in Hindustan Times disclosed that our Defence Ministry would be doing a mega joint exercise in the Andaman Sea. The contingents of Indian Army, Navy, Air Force, and the Coast Guard are to take part in the drills. IAF’s Jaguar maritime strike aircraft, transport aircraft, destroyers, anti-submarine warfare corvettes, amphibious warships with ship-borne helicopters among others will take part in the exercise.

The government officials consider it a strategically important exercise in a sensitive region where China has been trying to assert its influence and supremacy. The newspaper has spoken about the war equipment including the ships, subs and aeroplanes taking part in the exercise.

In this context some observations deserve to be opened up for discussion In the first place, we need to explain the strategic importance of the area of operation — Andaman and Nicobar islands. The real importance of the islands lies in their location in the Indian Ocean Region (IOR). One-fourth of the total world population and one-third of littoral states of the World, is located around IOR. A large volume of the World’s trade, particularly oil and gas, passes through this ocean. Islands provide for 30 per cent of India’s total Exclusive Economic Zone (EEZ).  Because the islands are located in the Indian Ocean, India is part of many maritime regional groupings. The ten-degree channel (that separates the Andaman Islands and the Nicobar Islands from each other in the Bay of Bengal) through which maximum of trade passes from the South China Sea and Pacific to the Indian Ocean is between North and South Nicobar Islands. The two islands act as a buffer zone between India and the rest of the nations present in the Indian Ocean Region (IOR). And finally, through these islands, India can defend its vital stakes in IOR. Andaman Naval Command has been set up in Andaman for this reason only.

Military exercises, whether on land, in the sky or the ocean, have assumed much importance in contemporary times because of the ever-expanding economic and security imperatives of a fast-growing world. In a selfish world, some states have become aggressive, covetous and intolerant.

By the exercise named Kavach, the message desired to go out is that any power nursing nefarious designs against India will have to think twice before taking any dangerous and precipitous action in the Indian Ocean Region (IOR).  A glance in retrospect will show that the balance of power in the entire region of the Indian Ocean had become tenuous when China began to adopt threatening posture in the region of the Chinese Sea and extending to the Indian Ocean. The immediate small countries falling in the littoral region had become apprehensive of the threat and hegemonic attitude of China. Knowing that India was the most important country with stakes in the IOR, China began challenging India’s influence and status as the regional naval power.

We are reminded that previous governments in New Delhi somehow did not attach the level of importance to the idea of strengthening our naval force and naval presence in this sensitive area.  On the other hand, from the very beginning of its socialist rule, China was seized of the strategic importance of this region.  The then-Chinese President Hu Jintao had coined the term “Malacca Dilemma” in 2003 referring to a narrow stretch of water between the Sumatra Islands and the Malay Peninsula, which can be blocked by rival nations. The country’s 80 per cent of the exports pass through the Malacca Strait, which is about 350 km from the Andaman and Nicobar Islands. India should have attached desirable significance to the area.

In its more recent appreciation of the need for securing IOR, the joint exercise planned in the Andaman Island region has pressed into action the assets of the Indian Army, Navy, Air Force, as well as the Coast Guard. IAF’s Jaguar maritime strike aircraft, transport aircraft, destroyers, anti-submarine warfare corvettes, amphibious warships with ship-borne helicopters among others will be part of the exercise.

This is India’s independent big joint drill and no foreign country was invited to participate in it. Earlier in December, a trilateral naval exercise, involving Japan and India as permanent partners was organized as Malabar Exercise. Originally begun in 1992 as a bilateral exercise between India and the United States, Japan became a permanent partner in 2015. Past non-permanent participants include Singapore and Australia The annual Malabar exercises includes diverse activities, ranging from fighter combat operations from aircraft carriers through maritime operations, anti-sub-marine warfare, diving salvage operations, amphibious operations, counter-piracy operations, cross–deck helicopter landings and anti-air warfare operations.

There are circumstantial reasons for India to upgrade and streamline the security parameters in the India Ocean in face of the threatening posture of China in the region. What concerns India more notably is the infamous ‘string of pearls’, meaning the Chinese way of expressing encirclement of India. The building of KK Highway and now the CPEC, deployment of PLA in its civilian profile in Gilgit, and Beijing’s plan of obtaining a definite military foothold in the Wakhan corridor with clearance from the Kabul regime as well as the Taliban command, the handing over of the Gwadar port to the Chinese authorities, all explain the northern line of the ‘necklace of pearls’. The border transgression in June 2020 in the Eastern Ladakh was meant to secure Tibetan plateau from the threat of secessionists who would, in all probability, establish rapport with the Uighur dissenting chapters.

Over the past few years, China is expanding its footprint in the Indian Ocean through its ‘Debt Trap Diplomacy’ and ‘String of Pearls Strategy’. Recent satellite images have suggested that China has been modernising its Djibouti military base. Through its debt trap policy, China lures the strategically located nations around India to borrow infrastructural loans. Once the nations are indebted, China pressurizes them to support its geostrategic interests. This is a variant of new colonialism and its harbinger China has gained politically and economically from her new game. Through its String of Pearls strategy, China is expanding its footprints to contain Indian hold in the Indian ocean. It is creating a ring around India through strategically placed nations such as at Chittagong (Bangladesh), at Karachi, Gwadar port (Pakistan) and Colombo, Hambantota (both in Sri Lanka) and other facilities.

India under Modi is responding to the ‘String of Pearls’ strategy almost with the same tactics but in a broader and wider spectrum which is almost unprecedented in the foreign policy of India. In a counter-action, India has started working on the ‘Necklace of Diamonds’ strategy. It aims at garlanding China or in simple words, the counter encirclement strategy. India is expanding its naval bases and is also improving relations with strategically placed countries to counter China’s strategies.  In 2018, Prime Minister Modi signed an agreement with Singapore that provides Indian Navy direct access to Singapore Changi naval base. While sailing through the South China Sea, the Indian Navy can refuel and rearm its ships through this base. In 2018, India got the military access to Sabang Port which is located right at the entrance of Malacca Strait. This strait is one of the world’s famous choke point. A large chunk of trade and crude oil passes on to China through this region.

Modi government has not underestimated the importance of Indian foothold on the western flank of the IOR. Therefore, apart from Sabang port in Indonesia, India under Modi obtained access to port facilities at the Duqm Port in Oman on the south-eastern seaboard of Oman. The port facilitates India’s crude imports from the Persian Gulf. In addition to this, the Indian facility is located right between the two important Chinese pearls– Djibouti in Africa and Gwadar in Pakistan. In 2015, India and Seychelles agreed upon the development of the naval base in this region. This gives the military access to India. This base is of strategic importance to India as China desperately wants to increase its presence in the African continent through the maritime silk route. Lastly, owing to some discouraging developments in the politics of the region, there surfaced the issue of the Iranian port of Chabahar whose development had been offered by Iran to India. But top functionaries of both countries have demonstrated their high professional skills in handling the issue and stopping the downward trend of Indo-Iranian relations.

The “Ring of Diamonds” meant to counter the ‘String of Pearls’ would be incomplete if Central Asia, Mongolia, Japan and Vietnam did not bring up the tail end. Prime Minister Modi visited all the 5 Central Asian Republics in one go and becomes the first Indian Prime Minister to do this. Within 4 years, trade with Central Asian countries has doubled after his visit. Again Modi was the first Indian Prime Minister to visit Mongolia which agreed to collaborate in developing a bilateral air corridor using India’s credit line. India and Japan have jointly declared to build the Asia-Africa Growth Corridor (AAGC), and India-Vietnam good relationship has begun showing results beneficial to both sides. India has so far sold Brahmos Missile and 4 patrol boats to Vietnam.

This global picture of the ‘great game of encirclement’ being played by China and countered by India, obviously has not one but many theatres to take care of. Action and reaction of conflicts in these theatres have their significance. For example, China’s belligerence at the border of Eastern Ladakh extending northward is closely linked to the international strategy in the Andaman-Nicobar Islands joint exercise or the Malabar exercise or the Quad exercise in the IOR.  The Dragon’s fangs in Eastern Ladakh have been blunted by the Malabar and Andaman exercises. The real worry is not the Eastern Ladakh or the Sino-Indian Himalayan border because India is fully capable and prepared to meet whatever exigency arises here. The real concern is of the smaller nations in the South China Sea and close to the Bay of Bengal that is under the threat from Beijing.  Hopefully, the Indo-Pacific strategy will take care of them befittingly so that the Dragon is de any move of sabotaging their freedom and imperilling their democracy.