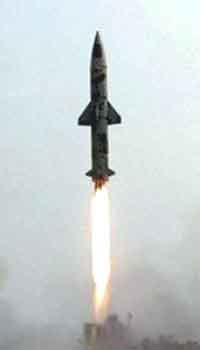 Pakistan’s nuclear programme is Indo centric and is based on offensive usage of nuclear weapons. On 19 April 2011, Pakistan successfully tested the Hatf IX, named NASR a solid fuelled battlefield range ballistic missile. The missile has been developed by Pakistani National Development Complex and carries a sub kiloton nuclear war head. The engine comprises of a single stage rocket motor and has an operational range of 60 km.

The launch platform is a Transport Erect Launcher (TEL) and is a multi tube ballistic system. Two Hatf IX Nasr Ballistic Missiles can be carried by a single TEL. NASR is a quick response system which has shoot and scoot nuclear delivery capability. A quick response system with regard to nuclear weapons is definitely destabilising as supposedly nuclear weapons ought to be used in the gravest circumstances.

Pakistan undertook nuclear tests in May 1998 and thereby emerged as an overt nuclear power, but it is yet to formally adopt a nuclear use doctrine.

The obvious question was why did Pakistan test the NASR. The Pakistani establishment has provided its rationale which does not appear coherent. The first is the acquisition of miniaturisation technology. This technology would assist Pakistan in miniaturising their Cruise Missiles Babur and Raad for submarine launches thereby moving on to second strike capability. The second is the TNW being a counter to India’s limited war doctrine. The adoption of a doctrine which envisages rapid attacks by India’s mechanised spearheads resulting in capture of sensitive shallow objectives would be effectively deterred by NASR. Pakistan proposes to use the TNW on Indian territory possibly at the areas of commencement of operations of Indian forces. This appears to be difficult as it entails usage of nuclear weapons prior to engagement by conventional forces.

Pakistan undertook nuclear tests in May 1998 and thereby emerged as an overt nuclear power, but it is yet to formally adopt a nuclear use doctrine. Accordingly one has to study the statements of Pakistani leaders as also its declaratory and operational postures to deduce the possible mode of usage of nuclear weapons. Mr Rao Sikandar, a previous Pakistan Defence Minister stated, “The country’s ultimate security lies in the use of atom bomb.”  Broadly Pakistan wishes to maintain a credible nuclear deterrence vis a vis India. Pakistan sees the success of India’s Ballistic Missile Defence Programme and the Indo-US nuclear deal as issues which have compelled the authorities to enhance the number of war heads as also develop Cruise Missiles and TNWs which would not be intercepted by the Indian Ballistic Missile Defence. The second aspect is of Strategic Restraint. Pakistan has viewed this issue under the areas of reciprocal agreements with India on nuclear weaponisation. Primarily these fall under five areas, the first is not to deploy ballistic missiles, the second not to operationally weaponise nuclear capable missile systems, the third to provide prior and adequate notification of flight tests of missile and fourth to declare a moratorium on the development, acquisition or deployment of Agni as it can destabilise minimum credible deterrence, The third aspect is not to quantify minimum credible deterrence but to upgrade its capability based on Indian response. The fourth aspect is to pursue arms control and disarmament at the global and regional levels while maintaining minimum deterrence.

…due to close proximity of Indian and Pakistani forces casualties would occur on both sides and the weapons would be used on Pakistani soil causing radiation hazards which would continue for a long time apart from inviting retaliation. In either case the overall result does not favour Pakistan.

The Pakistani views expressed above are emotional and lack logical application. There are two issues which emerge on the application of NASR, targeting Indian mechanised spear heads attacking Pakistan. At the strategic level it is using a nuclear weapon and as Air Chief Marshal (Retired) P V Naik has stated “Tactical or Strategic, it is a nuclear weapon. Our response would be absolutely violent, if it is used as per our existing policy. Accordingly it is not a game changer.” The second aspect to be considered is the modus operandi by which Pakistan can dissuade our forces from under taking proactive operations. Pakistan must give up its covert sub conventional operations against India by dismantling the terrorist infrastructure that exists in the form of terrorist camps across the Line of Control (LOC). This would definitely send a positive signal resulting in lowering of tensions on both sides.

It is of interest to note the timing when this weapon will be used. In case the weapon is to be used in non Pakistan territory it would imply usage of TNW on our forces while they are commencing the offensive. The targets in such case would be the areas where troops are concentrated or assembling in their process of under taking proactive operations. In such an eventuality usage of NASR frees India from the No First Use and gives us the liberty to use nuclear weapons. This option is unlikely due to the advantages it accrues to India. The next option is to use NASR once our forces are on the verge of capturing shallow objectives. In such an eventuality, due to close proximity of Indian and Pakistani forces casualties would occur on both sides and the weapons would be used on Pakistani soil causing radiation hazards which would continue for a long time apart from inviting retaliation. In either case the overall result does not favour Pakistan.

The introduction of NASR has certainly added a new dimension to the usage of nuclear weapons by Pakistan. In a way Pakistan is possibly imitating the NATO route during the Cold War. The concept was to use TNWs from the commencement of operations to block the Warsaw Pact offensive. The thought process had to be changed as it was prudent to reply with nuclear weapons instead of TNWs as they did not prevent escalation and it led to use of more destructive weapons as a matter of course.  Similarly use of Nasr would lead to punitive retaliation which would be detrimental to Pakistani interests. It would be naive to presume that there would be no retaliation to usage of TNW.

The response of India to the usage of NASR should be clear to all authorities. In consonance with our stated policy of ‘No First Use’ usage of NASR should be treated as use of a nuclear weapon and suitable response undertaken. As regards our land strike elements, they should be prepared for a TNW attack and be trained in undertaking protective measures while undertaking offensive operations.

3 thoughts on “Impact of Pakistan’s TNWs”