As part of the liberalisation process and to foster long term business/production tie up with global companies the offset policy in DPP 2006,2 2008,3 20094 included provision for credit banking5, delineation of defence products6 and dispensed with the licensing requirement in Ministry of Defence (MOD).

There is an urgent need to look at our offset policy options; particularly in regard to inclusion of technology transfer in priority areas, FDI policy in Defence and a more effective offset implementation arrangement.

DPP-20117 made a substantial leap from the earlier stipulation of direct offsets by including dual use Civil Aerospace products and Homeland Security items8 thereby ushering indirect offsets in a limited way. It also makes a definitive policy statement for progressive indigenization in critical areas and ensuring level playing field for the private sector including private shipbuilding companies.9

DPP-2011 was soon followed up with a Defence Production Policy10 document which outlines the road map for indigenization.

This paper examines impact of offset policy during (2005-2010) on indigenous capability build up in MIC (Military Industrial Complex) and bolstering self reliance. It brings out how offset realisation of around $2B during (2005-2010) was mainly for sub contractorisation of low end products and services, MRO facilities, Training & soft skills and has not brought in the expected inflow of FDI and JV arrangements, exports & long term business partnership in design, development and production of high end products.

There is thus an urgent need to look at our offset policy options; particularly in regard to inclusion of technology transfer in priority areas, FDI policy in Defence and a more effective offset implementation arrangement.

A very high degree of self reliance has been achieved in these areas except in the area of artillery guns of 155 mm calibre where army is still groping to fill up the void in towed and wheeled category-thanks to Bofors imbroglio.

The forty ordnance factories are engaged in production of small arms and ammunition of all the weapon systems, clothing, armoured and transport Vehicles.14 A very high degree of self reliance has been achieved in these areas except in the area of artillery guns of 155 mm calibre where army is still groping to fill up the void in towed and wheeled category-thanks to Bofors imbroglio.

The overall value addition of DPSUs hover around 37%. Midhani is a healthy exception (57%) where substantial self reliance in several critical material like titanium alloys, managing steel, special steel alloys, nickel base and cobalt base, super alloys and Niobium-Hafnium required by strategic sectors and programmes has been achieved.15

In case of OFs the value addition is substantial (85%), possibly because of the lesser technology depth of land systems compared to fighters and frigates.

Even amongst the naval platforms, value addition in submarines is substantially less (23%) compared to patrolling vessels (37%), because of technology depth.

An overview of performance of the DPSUs and OFs is placed below: 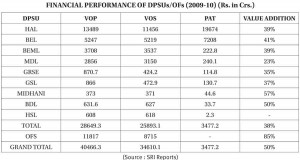 The 50 Defence R&D lab(s) are engaged in progressive enhancement of self reliance of defence systems.16

Some of the major milestones towards making the country self- reliant in the areas of military technology are:

The value of systems/products/technologies developed by DRDO and inducted into the services is in the range of $11B.17