The Article 370 was clearly meant to be a temporary provision included in the Constitution to cater for the specific requirements of the troubled times immediately after India’s independence and the state’s accession to India. It was meant to remain in operation during the existence of the State’s Constituent Assembly.

As time passed, the vested interests within Jammu and Kashmir and the compulsions of various political parties outside the state to appease their vote banks ensured its retention. No thought was spared by the votaries of ‘the retention of Article 370’ for the enormous potential this would have to wreak havoc on the unity and integrity of the country. It is the only state in India which has a constitution of its own.

As no outsider can settle in the state and own any property there, the politically well-connected people stand to gain enormously. It is these influential people who make the rules, decide the price and determine the buyer, since any competition from an outsider is completely ruled out.

To begin with, Article 370 has built emotional and psychological barriers between the people of Kashmir and the rest of India, thus fostering a psychology of separatism. Existence of this statute is used by Pakistan and its proxies in the valley to mock at the very concept of ‘India being one from Kashmir to Kanyakumari’. It has kept alive the two-nation theory. Over a period of time, the separatist lobby in the state has used this barrier to build a mindset of alienation. Such a possibility had been clearly visualised by many political stalwarts who comprised the Constituent Assembly of India. While speaking in the Constituent Assembly of India on October 17, 1949, one of its distinguished members, Hasrat Mohani had said, “The grant of special status would enable Kashmir to assume independence afterwards.”

The vested interests in Kashmir, be these politicians, bureaucracy, businessmen, judiciary, etc., have misused Article 370 for their own nefarious purposes, by exploiting the poor and the down-trodden people of the state. The rich have consistently used Article 370 to ensure that no financial legislation is introduced in the state, which would make them accountable for their loot of the state treasury. These include the provisions dealing with Gift Tax, Urban Land Ceiling Act, Wealth Tax, etc. This has ensured that the rich continue to grow richer and the common masses are denied their legitimate share of the economic pie. Article 370 has also helped create power elites and local Sultans, who wield enormous power, which they use to trample upon the genuine demands of common people for public welfare. As no outsider can settle in the state and own any property there, the politically well-connected people stand to gain enormously. It is these influential people who make the rules, decide the price and determine the buyer, since any competition from an outsider is completely ruled out.

This way, land resources are cornered by the rich and mighty, causing huge revenue losses to the state. These vested interests have gained much financial assistance from India which they have used to build separatist mindsets and secessionist lobbies with which they blackmail India.

To the gullible people of Kashmir, the abolition of Article 370 is projected as a catastrophic event that will sound the death knell of Kashmiri Muslim culture, but in actual fact, this argument is a ploy to prevent assimilation of Kashmiris into the national mainstream. That way, these power brokers continue to expand their fiefdom, perpetuate their hold on political and economic power and build a communal and obscurantist mindset, which in due course serves as a breeding ground for creating a separatist mentality.

…as no culture can survive without the stimulus of outside contact and opportunity to cross-fertilise. It was this mindset that has been responsible for creating the violent communal upsurge of 1989, which finally led to the exodus of Kashmiri Pandits.

The bogey of threat to the Kashmiri identity that the abolition of Article 370 will pose is merely a ploy to camouflage the political ambitions of the leaders. Actually these very people cause a great damage to Kashmiri culture, as no culture can survive without the stimulus of outside contact and opportunity to cross-fertilise. It was this mindset that has been responsible for creating the violent communal upsurge of 1989, which finally led to the exodus of Kashmiri Pandits.

One of the main reasons for the failure of the state administration to respond to the anguished cries of the Kashmiri Pandits to provide them with adequate security in 1998–90, was that the state administration had been completely subverted from within by the radical anti-national elements, who had infiltrated into the system over a period of time.

This infiltration had been made possible by the existence of Article 370. “Within the broad framework of the special status envisaged by Article 370, which isolated the state from rest of India, it was far easy for secessionist elements to infiltrate into the administrative cadres of the government.”12

One of the worst human tragedies the state faces is the denial of basic democratic and citizenship rights to nearly 600,000 refugees from Pakistan who entered the state at the time of partition or as a result of wars between India and Pakistan, thereafter. These refugees have made the state their home for the last over six decades, yet neither they nor their children can get citizenship rights in the state, as result of the applicability of Article 370. They can neither vote nor fight election; they cannot get loans from the state nor seek admissions into various professional colleges of the state.

…whereas, Article 370 provides all the political, economic and cultural and other safeguards to Kashmiris, the same provision is misused of by Kashmiris to deny the same safeguards to people of other regions of the state.

Article 370 has also been misused by political oligarchs to perpetuate their hold on power by preventing various democratic legislations from being applied to the state. Take the case of ‘anti-defection law’, which is a useful provision for preventing defections. This legislation vests the powers of deciding whether a legislator has defected or not, with the Speaker. However, in Jammu and Kashmir, the power has been vested with a party chief, thus turning the leader into a virtual dictator.

Article 370 has also been used to deny a fair share of economic pie to both Ladakh and Jammu region (see chapter 18). Violent agitations that rocked Ladakh in July-September 1989 were the result of the resentment felt by Ladakhis at being treated unfairly by Kashmiris Muslims, who have a stranglehold on political power in the state. It is ironic that whereas, Article 370 provides all the political, economic and cultural and other safeguards to Kashmiris, the same provision is misused of by Kashmiris to deny the same safeguards to people of other regions of the state.

As early as 1932, Bertrand Glancy, Chairman of the Grievances Committee was compelled to write in his report: “The present definition of State Subject appears to be unduly rigid; domiciles in a state for a thousand years cannot, according to this definition, qualify a man. It would seem both unfair and inexpedient to deny the right to franchise to a man who has so far identified himself with local interests as to make his domicile in the state over a consecutive period of five years.”13 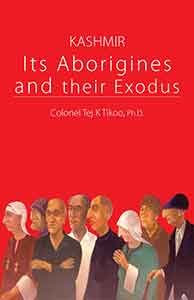 Dr BR Ambedkar had forewarned the country on this score in reply to Sheikh Abdullah’s demand for a special status in the Constituent Assembly of India. He had said, “You want India to defend Kashmir, give Kashmir equal rights over India, but you deny India and Indians all rights in Kashmir. I am Law Minister of India, I cannot be a party to such betrayal of national interests.”14

13.  Jagmohan: My Frozen Turbulence in Kashmir; p. 249. After the communal disturbances of July 1931, the British appointed a one-man commission headed by Bertrand Glancy to probe the happenings and look into the grievances of the people and suggest remedial measures.