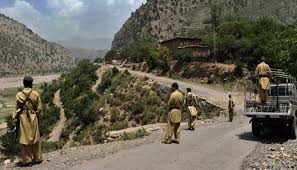 If Pakistan army is to be believed, then something unimaginable and unpardonable happened in the Boya area of North Waziristan on May 26 last year. On this fateful day, four unprecedented things happened- one, a mob of PashtunTahafuz Movement (PTM) activists (in ISPR’s words), “assaulted” the army’s Kharqamar checkpost in broad daylight. Two, it was a brazen attempt by locals to (again in ISPR’s words) “exert pressure for release of suspected terrorists’ facilitator” who had been arrested a day earlier from Doga Macha Madakhel village after an encounter between Pakistan army and suspected terrorists, during which one soldier was injured (more about him later).Three, the mob was led by two serving legislators, Ali Wazir and Mohsin JavedDawar who are Members of National Assembly (MNA), and lastly, (as per ISPR), the mob resorted to “direct firing on the post.”

Those who know Pakistan Army would have expected that with so many ‘firsts’ the army retaliation would have been massive. But ISPR stated that “Troops at the check post exercised maximum restraint in the face of provocation and direct firing on the post. Due to firing of the group, five Army soldiers got injured. In exchange of fire, three individuals who attacked the post lost their lives and 10 got injured.” Taking a very serious view of this incident, the Army subsequently lodged a FIR with the Bannu Range Counter-Terrorism Department Police Station against multiple PTM workers (including MNAs Dawar and Wazir) under different sections of the Pakistan Penal Code, Maintenance of Public Order Ordinance and even the Anti-Terrorism Act. While a section of the media went along with the Army’s version of this incident, but blatant misinformation of factual details in the ISPR’s narrative completely ruined its cooked-up story.

The Army’s media wing’s claim that “In exchange of fire, three individuals who attacked the post lost their lives and 10 got injured,” immediately fell flat because there was physical evidence prove that at least 13 protesters were killed and about 25 to 40 injured due to the firing by army soldiers (MNA Dawar has put the figures as 15 killed and 40 injured). While ISPR remained unfazed, at least leading Pakistani English daily Dawn showed spine by carrying a note below its report titled ‘Govt moves to withdraw Karqamar case against PTM leaders, others’, (updated on 10 July 2020), that reads “Correction: The story earlier erroneously stated that three people were killed in the clash on May 26. It has been amended to reflect the total death toll, which was 13. The error is regretted.)

Such large casualty figures, in turn, completely negates the ISPR’s claim that “the check post exercised maximum restraint in the face of provocation and direct firing on the post.”

Furthermore, with Pakistan Army not permitting a fact-finding team of Human Rights Commission of Pakistan (HRCP) investigating this incident to visit the Kharqamarcheckpost, it became more than evident that as far as this massive shootout was concerned, the Pakistan army certainly had a lot to hide! If the army didn’t want to suppress facts, then why did it impose an eight-day long curfew in DogaMacha Mada Khel village after the Kharqamar shooting?

No wonder the entire opposition walked out of the National Assembly to protest against the killing of civilians and the government came under intense pressure as Dawar’s version that “They (Army soldiers) beat up a woman and picked up some other people yesterday (May 25)” and that “We were going to protest that incident when they opened fire on us,” appears more believable. Perhaps that’s why Vice-President of Pakistan Muslim League (Nawaz) Maryam Nawazunambiguously condemned Pakistan Army’s characteristic strong-arm tactics while dealing with civilians by saying, “Have we not already paid tremendously for crushing protests and suppressing voices?”

Even though it is merely a social movement for safeguarding human rights of the Pashtun community, the Army had made no secrets about its unqualified hatred for PTM. Readers may recall that during an interaction with the media less than a month before this incident, Maj Gen Asif Ghafoor, (who was the then DGISPR) had publicly warned the PTM leadership that “Their time is up.” So, the indiscriminate shooting of Pashtuns by soldiers who were manning the Kharqamarcheckpost though unfortunate, isn’t something that was completely unexpected. Though the PTM’s demands are justified, possibly its demand for an immediate end to the practices of extrajudicial killings, enforced disappearances and unlawful detentions is the main source of the Pakistan Army’s discomfiture!

During the “time is up” media interaction, Maj Gen Ghafooralso made some rather serious charges against PTM by saying, “On the PTM website, they have got a number that states the amount of funds they have collected from Pashtunsaround the world. But tell us how much money did you get from the NDS (National Directorate of Security of Afghanistan) to run your campaign? How much money did RAW (Research and Analysis Wing of India) give you for the first dharna in Islamabad? Though DGISPR didn’t furnish any proof to support his allegations, but the fact that it applied the Anti-Terrorism Act on PTM activists in the Kharqamarcheckpost incident indicates that Rawalpindi was convinced of PTM being an anti-national organisation with links to Pakistan’s arch-enemies- India and Afghanistan!

However, it’s now emerged that the government had quietly filed an application in the Bannu anti-terrorism court on March 16 seeking withdrawal of the Kharqamar checkpostcase. As per Dawn, this application reads that “The state as per instructions of the provincial government with reference to the prevailing situation, intend to withdraw prosecution of the subject case.” Whereas this move has being seen as a confidence building measure to resolve the existing deadlock between the government and PTM, but the truth is more pedestrian. It was just to escape international criticism and public censure for the indiscriminate firing that killed, maimed and injured nearly 50 unarmed protesters that ISPR spun the wobbly yarn in defence of the army, of the checkpostcoming under fire from protesters forcing soldiers to fire back, about five soldiers being injured due to firing by PTM activists, and one of the soldier even succumbing to his injuries!
The reality is that even though the army made such hue and cry about the Kharqamar checkpost incident, it knew all along that it’s falsehood wouldn’t be able to stand scrutiny of Law. In fact, since Rawalpindi had already achieved its aim of diverting international and domestic attention from this despicable carnage by its soldiers by making PTM the scapegoat, to continue pursuing this case in courts made no sense and also ran the risk of exposing the truth. As it is, the Pakistan Army has disregarded Amnesty International’s directions that this incident “should be fully investigated to determine if there was any use of excessive force and if any resulting killing was unlawful.” So, it would not want this incident to be resurrected through the courts and revive the controversy surrounding this shooting.

HRCP, which was not permitted to investigate this incident by the army has also condemned this attack and demanded inquiry by a parliamentary commission- a request that has (expectedly) gone unheeded. It has also lambasted curbs enforced by Pakistan army in former FATA, but not wanting to annoy the powerful military, HRCP has cleverly thrown the ball in Islamabad’s court by noting that “the state must ensure that the media and civil society have independent access to the former FATA.” Taking a snipe at ISPR’s attempts to keep the media ‘on leash’, HRCP has also stated that “The country’s mainstream media must also understand its responsibility to report on this region fairly.” Therefore, by ‘directing’ Islamabad to withdraw this case despite it accusing PTM for having links with RAW and NDS, Rawalpindi, has unwittingly spilled the beans!

One may ask that with withdrawal of the Kharqamar case, what about justice for Sepoy Gul Khan, who as per DGISPR purportedly died due to gunshot wounds sustained in the firing by PTM protesters? What about final closure for his widow and children? But there’s nothing to worry about on this account because taking back the Kharqamar case will in no way deny justice to Sepoy Khan or his family- simply because he didn’t sustain gunshot injuries on the day PTM activists “assaulted” the checkpost.

Remember the encounter of May 24, 2019, that took place between Pakistan Army soldiers and unidentified gunmen at Doga Macha Madakhel village during which one soldier was injured? Well, Late Sepoy Gul Khan was this person and has cunningly been projected as a victim of PTM inspired mob violence just to cover-up the army’s grossly excessive use of force. Whereas, such unethical manoeuvres are not expected from a professional army, but with the DGISPR publicly announcing Rawalpindi’s depraved policy of “all is well in love and war”, for the Pakistan Army to indulge in factual skulduggery is no big deal!