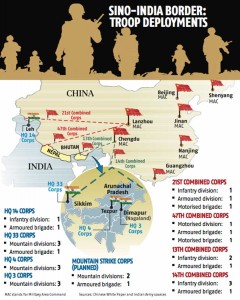 It has been an interesting couple of weeks between India and China. The Chinese finance minister Lou Jiwei met with Indian finance minister Arun Jaitley in Washington at the sidelines of the annual spring meeting of the International Monetary Fund (IMF) and the World Bank, where both gentlemen agreed to greater mutual cooperation in “multilateral forums”.

A round of important issues was discussed lately, most importantly during the border dispute issues. Chinese State Councilor Yang Jiechi (R), who is the Chinese special representative on China-India boundary issues, met with his Indian counterpart Ajit Doval as the two sides had deep and extensive and candid talks, Xinhua reported. The report also stated bilateral ties had entered a new era between the two giants with the successful visit of Chinese President Xi Jingping to India in 2014 and Indian Prime Minister Narendra Modi to China in 2015. Both sides agreed that the only way to solve any border dispute or any bilateral problems was through official channels and negotiations.

Premier Li said that India and China, being two of the topmost economies of the World, should involve in more exchanges and maintain the momentum of the bilateral relations. Doval agreed, saying that the recent improvement showed that India and China were scoring positive progress. Interestingly a significant issue got traction, as the South China Morning Post reported that India and China had scored some progress about setting up a military hotline to prevent accidental flare ups. Meng Jianzhu, who is the head of the commission of the political and legal affairs also met Doval and agreed to increase cooperation on fighting cybercrimes, terrorism and separatism.

However tensions remained. The Indian government, ministers and newspapers were livid in the recent past on the issue of Masood Azhar, chief of the Jaish e Mohammad, and accused of cross border raids in India. Although UN had banned the organization, it apparently operates in different names, and India had been powerless to do anything about it.

The issue heated up and got a special mention in the usually apolitical Indian army’s think tank as well. Indian ministers have also recently repeatedly taken up the issue with the Chinese side. On the other hand, China had been furious with India granting visa to Uighur activist Dolkun Isa.

There is, thus, both cause of hope and concern.  The concerns first. There are some issues, like Islamic terrorism that India is extremely sensitive about having faced such for over three decades. Recently there has been a massive opening between China and India when it comes to terrorism and intelligence sharing, but a lot still remains to be done. Strategic circles inside India reflexively are skeptical of anything to do with China and Pakistan relation, which is a barrier of future relationship building anyway.

There is an entire strategic community inside India which wants an instinctive pivot to Japan, Vietnam and US as a counter measure; though they are still a minority and the realists of Indian government are still in charge of the direction of Indian foreign policy, the culture of apprehension needs to change.

In fact, this is one issue India and China can work on together, provided Chinese concerns for terrorism and nuclear proliferation are extremely real as well, just like India. China and India can cooperate in intelligence sharing and stabilizing Afghanistan, where both the countries are actively engaged to chart a course for the future. The threat quotient coming out of Afghanistan is directly related to the security situation in vast parts of Central Asia, where both China and India have incredible commercial links, also true for Western China and Northern India.

The point is this binary understanding of Chinese Indian relationship leaves a lot desired as there are more opportunities for China and India to cooperate than to compete. On a macro scale, if one measures the scope of Sino Indian cooperation, and the one or two causes of concern and conflict, it is understandable why the politicians and leaders of both the countries are trying to forge an ever closer relationship. That needs to be welcomed, but not at the cost of Indian security and India needs to make China understand that.