HAL: Transforming into a competitive player

Could you please give an overview of the milestones crossed since you assumed charge as Chairman HAL nearly two years ago?

We have witnessed achievement of significant milestones in projects like the LCH, Hawk, Su-30MKI, and the LUH. The first flight of LCH was achieved in Mar 2009. We have fully assimilated the technology for production of Hawk and Su-3oMKI. The configuration freeze for the LUH was completed. These achievements reflect the team effort at HAL and happens over a period of time. Many projects which were started five to six years ago are fructifying now. 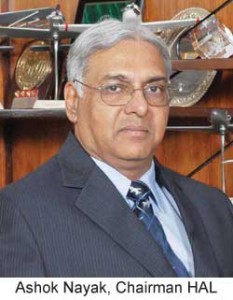 Two major initiatives with Russian partners for development of MTA and the FGFA were launched recently.

We have maintained a decent growth in Sales by around 10 per cent per year.

What are HAL’s plans towards providing the IAF with a basic trainer aircraft? Are there any plans to revive the grounded fleet of HPT 32 aircraft?

As desired by IAF, the aircraft is being modified with an Aircraft Parachute Recovery System (APRS). We are working closely with the engine OEM to resolve the engine issue. These measures are expected to be demonstrated to IAF by Feb/Mar 11.

How far has HAL progressed in the joint effort with Russian companies to design and build the Fifth Generation Fighter Aircraft?

HAL has just concluded the Preliminary Design Contract with the Russian side in Dec 10. This phase is expected to give HAL designers an insight into the aircraft technical specifications and to formulate the design improvements required for the IAF variant of the aircraft.

In what timeframe should the IAF expect to receive the indigenously designed and developed Light Attack Helicopter, the Light Utility Helicopter and the armed version of the Dhruv?

LCH: The Light Combat Helicopter (LCH) is in flight evaluation phase. The first technology demonstrator is already flying while two more prototypes are being built. LCH is expected to be ready for user evaluation by early 2013.

LUH: The first prototype of the Light Utility Helicopter will be test flown in 2012 and its Operational Clearance is scheduled to be completed in 2014.

ALH Mk.IV: Weapons have been integrated on the helicopter and tested in stand-alone mode. Testing in integrated configuration and high altitude trials are planned to be completed by mid 2011. Delivery of Mk.IV helicopters will commence in later part of 2011-12.

How has HAL been performing on the export front?

HAL is transforming gradually into a competitive player in line with its vision to be a leading global aerospace company. HAL’s current exports are already moving in the direction of building aero structures for aircraft of leading international aerospace companies. Plans are afoot to establish dedicated facilities for manufacture and export of large aero structures with the ultimate objective of integration and export of fully built aircraft in the long term.

With established proven track record for supply of structural sub assemblies to Airbus & Boeing, follow on orders have been received from them which reinforces the confidence in HAL’s capabilities.

Has any progress been made on the project for the joint development of military airlifter to replace the AN32 fleet of the IAF?

A Multi-role Transport Aircraft (MTA) will be co-developed with Russians. A JVC (Multi-role Transport Aircraft Ltd) has been incorporated in India with HAL and Russian as equity partners (50:50) on 1 Dec 2010. Development activities are expected to commence shortly and the aircraft is expected to be ready with certification in about 6 years timeframe.

Honeywell demonstrated an engine a few years ago for upgrade of the Jaguar fleet of the IAF. What is the current status of the programme?

An RFP has been floated by IAF to Honeywell and Rolls Royce in Nov 10 for the re-engining of Jaguar. HAL would participate in the program with identified work-share during the trial mod and thereafter in the series upgrade.

HAL has entered into a number of joint ventures with foreign aerospace companies. What have been the gains if any so far and how are these expected to help HAL achieve its core objectives?

Hindustan Aeronautics Limited (HAL) has established 10 Joint Venture companies (JVCs) out of which six are with foreign companies. Four JVCs are currently generating profits. Five JVCs are in the initial phase of operations and would break even shortly. The tenth JV for manufacture of civil aero-engine components has been incorporated recently.

Indian aerospace industry needs augmentation in the areas of development and production of related equipment and systems. JVs are expected to take up the development of these systems and equipment.