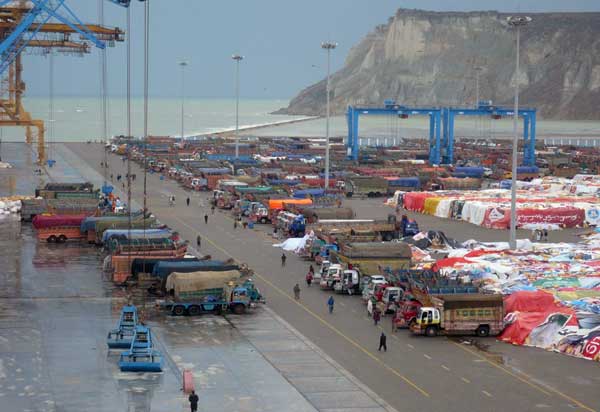 International pressure and concern notwithstanding, China is now poised to change the maritime strategic equation in the South Asian region. Media reports suggest that the Gwadar port in Balochistan, Pakistan is likely to become operational in April, 2015. Work is in full swing to establish free-trade zones, where a large number of national and international companies have started setting up business centres.

Gwadar gains importance due to its strategic location at the mouth of the Persian Gulf, just outside the Strait of Hormuz.

Chinese President Xi Jinping, during his visit to Pakistan scheduled for April, 2015, is expected to discuss utility and further development of the port at the highest level.

Gwadar gains importance due to its strategic location at the mouth of the Persian Gulf, just outside the Strait of Hormuz. This strategic location affords for it access to almost two third of the world’s oil reserves and naturally comes as a great boon to energy starved China. In one master stroke China has reduced for itself the importance of the Strait of Malacca and the South China Sea and added the most important link to its “string of pearls” around India.

So far as Pakistan is concerned the operationalisation of Gwadar port will greatly enhance its port and trade capability. Its existing two ports at Karachi and Qasim are reaching to the peak of their capacity and with this new addition it will be able to meet the growing domestic demand. It will also be in a position to expand operations for land locked Central Asian Republics and Afghanistan in addition to China.

Interestingly, China was not Pakistan first choice for operationalisation of the Gwadar Port. As far back as 1973, the Prime Minister of Pakistan, Zulfikar Ali Bhutto offered Gwadar to the US as a Naval Base in exchange of its development. The US failed to understand the importance of the port and declined the offer. A second attempt was made by Pakistan by roping in PSA International of Singapore, one of the world’s largest port operators. Singapore kept dragging its feet to the extent that Pakistan called for a repeal of the agreement and then approached old, trusted and good “friend” China.

Gwadar is expected to have the capability of handling up to 19 million tons of crude oil per year which will be refined at the port itself and then sent to China through the Gwadar-Kashgar pipeline that is on the drawing board.

China did not hesitate for a moment; on February, 18, 2013, the Government of Pakistan handed over operational control of the port to China, even as India and the US looked on. Ever since, China has pumped in millions not only for development of the port but also for a build-up of infrastructure right from the Gwadar to the Chinese city of Kashgar in Xingjian Province. Kashgar is the westernmost city of China located near the border with Tajikistan and Kyrgyzstan.

Gwadar is expected to have the capability of handling up to 19 million tons of crude oil per year which will be refined at the port itself and then sent to China through the Gwadar-Kashgar pipeline that is on the drawing board. Thus, China is poised to leverage the Gwadar Port for connecting with the Central Asian Republics, Russia and the Middle East.

China is ready to invest a massive sum of nearly 12 Billion USD to build a Pakistan China Economic Corridor (PCEC) for this purpose. In addition China has committed to many more subsidiary projects like two nuclear power reactors in Karachi, an international airport at Gwadar and overland high speed fibre optic link to Rawalpindi to name a few.

The project, however, has many problems, the envisaged connectivity to Kashgar will take a long time to come by and in the interim the Karakoram highway will remain the only link. The infrastructure that is to be built will also pass through Gilgit-Baltistan which is Indian territory under forcible occupation of Pakistan and through Pakistan of China. Pakistan is building the infrastructure illegally. The people of Gilgit-Baltistan have, since long, been demonstrating against the Karakorum highway which they say is the source of drug proliferation and other such crimes in the region.

China has committed to many more subsidiary projects like two nuclear power reactors in Karachi, an international airport at Gwadar and overland high speed fibre optic link to Rawalpindi to name a few.

The festering insurgency in Balochistan is also not being factored in the plans. It is widely believed that the profits will accrue only to the ruling Punjabi elite and Balochistan will be left with no benefits whatsoever. The insurgency, therefore, will witness a spike in the absence of a just political and social package being given to the Baloch people. Such a package is quite unlikely.

The Pakistan newspapers that carried a story on the operationalisation of the Gwadar port also carried another story of militants in Balochistan killing 20 persons in Turbat.

That insurgency and large scale economic activity cannot go hand in hand is something that the Chinese should understand before sinking billions into a project that is likely to get derailed due to the human element.

Sadly, the UPA government lost out on the political initiative by merely expressing “concern” over the Gwadar port deal between China and Pakistan. In fact, the UPA Foreign Minister, Salman Kurshid, at one stage advocated against “overreaction” by India and the need to maintain the “delicate balance in the entire region.”

The Government of India will now have to take a more dynamic posture in concert with other global powers like the US. The use of Indian occupied territory of Gilgit-Baltistan for this project by Pakistan with involvement of a third party – China and against the wishes of the subjugated people is an issue on which India needs to take a strong moral and diplomatic stand. The matter needs to be taken for arbitration in the International Court of Justice, raised in the United Nations and discussed in international forums. India also needs to highlight the injustice being done to the people of Balochistan and seek for them some respite. If China makes an attempt in concert with Pakistan to foster maritime hegemony in the Arabian Sea than appropriate counter measure will have to be taken. The time for procrastination is over and the need to redraw maritime strategy in concert with the US is more urgent now more than ever before.