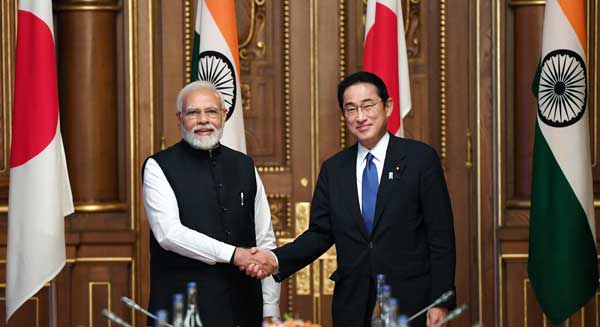 The two largest Asian democracies- India and Japan who share common values of democracy, freedom and rules-based order, have been deepening their ties in all the spheres dynamically. The diplomatic ties between the two nations have completed 70 glorious years and the Indian Prime Minister Narendra Modi has described their relations as special, strategic and global in the recent Quad summit held in Tokyo. The cultural ties between India and Japan have been mutual since historic times.

India has been an indispensable collaborator for Japan in promoting development and modernization right from the automobile industry to the industrial corridor. During the 14th annual summit between the two nations, Japanese PM Fumio Kishida committed to providing 5 trillion Japanese Yen for public and private investment and financing over the next five years to India. During PM Modi’s visit to Tokyo for the Quad summit, the two leaders held bilateral discussions to discuss and work towards deepening their ties. Modi and Kishida showed their immense desire to work towards enhancing cooperation in defence manufacturing, trade and investment and promote people to people ties for mutual benefit.

India and Japan come together with their utmost commitment to ensure a free and open Indo-Pacific for freedom, navigation, inclusiveness and a rules-based international order. What has come out quite prominently in this Quad summit is that the free, open and inclusive Indo-Pacific region is being encouraged and promoted widely. India and Japan attempt to counter Chinese aggression in the Indo-Pacific through their cooperation which is of their common interest for peace and stability of the country and the entire international order. One of the key strategic priorities of both nations is countering China’s role in the Indo-Pacific which would be primarily achieved through the enhanced defence and security cooperation, and economic and technology cooperation.

Furthermore, the four Quad member countries have reaffirmed their commitment to cooperation in the Covid-19 pandemic response, infrastructure, cyber security, climate change and emerging technologies. Leaders of both countries also welcomed the signing of the $100 million loan facility between the Japan Bank for International Cooperation (JBIC) and the Export-Import Bank of India as an outcome of the Quad Vaccine partnership.

The support through the ACSA would further enable India and Japan to cooperate with third countries which would increase maritime security cooperation in the Indo-Pacific region.

Modi and Kishida have further agreed to enhance their security and defence cooperation in the area of defence manufacturing. The defence cooperation between India and Japan is facilitated by the 2+2 Defence and Foreign Ministerial Dialogue which is likely to be held by mid-2022.

The two nations strengthened their defence and security cooperation in 2020 when India and Japan signed an Acquisition and Cross-servicing Agreement (ACSA). This agreement aimed at the reciprocal provision of supplies and services which created a framework for cooperation between their armed forces- the Indian army and Japan’s Self-Defence Forces (SDF). The ACSA came into effect in July 2021 and enabled mutual logistics support during joint exercises and training. The support through the ACSA would further enable India and Japan to cooperate with third countries which would increase maritime security cooperation in the Indo-Pacific region.

India-Japan economic ties have flourished deeply in recent times as Japanese companies have been seeking greater investments in India. Modi held a meeting with top Japanese business leaders during his Tokyo visit, wherein, the CEOs of 34 Japanese companies participated. The companies were from diverse sectors such as automobiles, electronics, steel, technology, banking and finance. He put forth the initiatives such as the Production Linked Incentive (PLI) scheme, the National Infrastructure Pipeline (NIP), the startup ecosystem of India and the semiconductor policy.

The ‘Startup hub’ platform initiative between India and Japan brings together Indian and Japanese start-ups for joint inventions. The Mumbai-Ahmedabad high-speed rail project depicts Japan’s extensive collaboration in the important endeavours to build a new and vibrant India. PM Modi said, ‘As both India and Japan look to re-invigorate and refashion our economies in a post-Covid era, there is immense scope to deepen our engagement across the entire spectrum from trade and investment to defence and security.

Technology cooperation has also increased rapidly between India and Japan, and technology acts as a key pillar of Japan’s Overseas Development Assistance to India. Both nations enhanced cooperation in the ICT field, including 5G, telecom security, smart-city technologies, and submarine cables.

India remains reliant on Russia for the defence equipment and supplies, while Japan’s main interest lies in taking a position against Russia to defend the rules-based order to further achieve a free and open Indo-Pacific.

However, there have been certain divergences also between India and Japan, such as in their stance toward Russia’s invasion of Ukraine. While Japan joined other nations in condemning Russia’s actions and imposed sanctions, India’s response has been quite neutral. The two leaders called for the cessation of violence.

Both countries had differences even in the month of April when Japan intended to send a military aircraft to India for collecting humanitarian aid supply for Ukrainian refugees. Japan’s plan was refuted by India as it only allowed a commercial aircraft to collect the supplies.

India remains reliant on Russia for the defence equipment and supplies, while Japan’s main interest lies in taking a position against Russia to defend the rules-based order to further achieve a free and open Indo-Pacific.

Despite these differences, India and Japan continue to deepen their special strategic and global partnership and their willingness to cooperate to counter China’s role is of utmost importance. During the Quad summit, two Chinese bombers and two Russian bombers were spotted near Tokyo in the Sea of Japan and made a joint flight to the East China Sea. This move is seen as a provocative one which was directly aimed at the Quad summit. Nevertheless, the India-Japan partnership will strengthen in the areas of security as well as economic cooperation in the near future.

One thought on “Growing relations between two Asian democracies: India and Japan”