Government should give due consideration to selection of defence minister 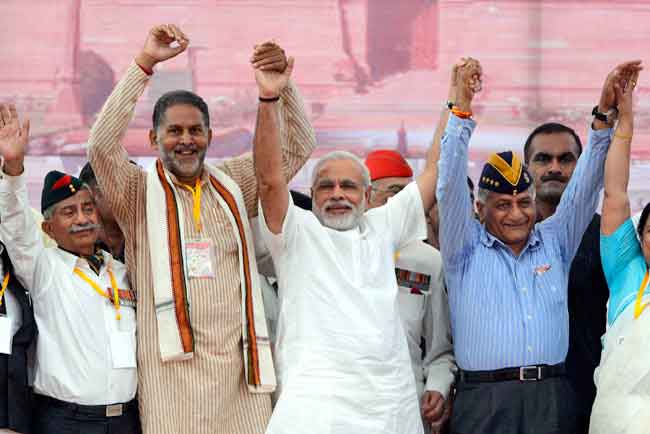 There are many contenders for ministerial berths in the new government at the centre. Prime minister has the onerous task of putting the right man in the right job. There will be pressure on him to accommodate some from the other constituents of NDA as also allot berths to various regions. For a party and leader who has transcended and rejected communal, cast and categorization of electorates into social and regional groupings, representative representation in the ministry need not follow these narrow considerations. Nor should he fall prey to pressures, from within the party and to those who are hankering after a particular ministerial berth.

In the past, almost since independence, there has rarely been, with the exception of two or three, a suitable person in-charge of this ministry.

The more important ministries are finance and home. The Prime minister can be relied upon to put the best from his team in these two ministries. Ofcourse there are other which are equally important and have direct bearing on the economic development and prosperity of the country. These are the areas which directly effect the common man, who has essentially voted for Modi, in the hope that he will bring about the much promised ‘vikas,’ and thus a change for the better, in the grinding poverty of their lives.

In this clamour for the apparently important ministerial assignments, possibly the other equally important ministry of defence may end up with less suitable person. In the past, almost since independence, there has rarely been, with the exception of two or three, a suitable person in-charge of this ministry. Therefore, it is no surprise that the security scene of the country has been least assuring and the defence services have remained inadequately equipped to face the emerging security challenges confronting the country.

More than six decades after independence, we still imports over seventy percent of defence equipment, which has pronounce adverse effect on the country’s economy. Besides out go of huge amount of foreign exchange, it results in loss of millions of jobs. For this sad state of affairs successive defence ministers are accountable. The policy of nurturing and promoting a ‘set-up’ called Defence Research and Development Organization (DRDO) has stymied all attempts at privatization of this important aspect of industralization. DRDO even with the active support of ministry of defence and defence production has not only failed to deliver but has been allowed to derail attempts to privatise defence industry. It has shown no ability even at reverse engineering of imported equipment Thus defence has continued to be a major drain on foreign exchange. This dependence on import of essential defence equipment bears adversely on the security of the country, because at critical moments of a conflict, supply of important spares, ammunition etc can be blocked.

More than six decades after independence, we still imports over seventy percent of defence equipment, which has pronounce adverse effect on the country’s economy.

In view of all this, one hopes that the prime minister will select the right man for the job of defence minister: one who has reasonable grasp over national security issues and has the vision and the compelling urge to draw the country out of this import syndrome of defence equipment and not ‘taken-in’ by the smooth talk and false assurances of DRDO. One who understands, the urgency to do away with most of the defence Public Sector Units (DPSUs)

The other important area that required urgent attention is the synergizing and unifying of the defence potential of the security establishment, to optimize defence capabilities of the country. Adopting the CDS system and amalgamation of ministry of defence and services headquarters should not be delayed any longer. Arun Singh Committee, set up soon after the Kargil conflict, had strongly recommended the adoption of CDS system, but this has met with opposition from the babudom and the political class has been none the wiser. Therefore, selection of a right defence minister is an important issue which the prime minister must give due consideration.

Some senior officers from the army have advanced uncalled for and biased view on the suitability of General VK Singh for this post. Such views betray a latent prejudice and stance carried forward from days, while in service. These officers own service record is not praise worthy. General VK Singh, winning the election with the second highest number of votes, has, beyond doubt, established, not only his own standing but, equally his organizing abilities and skill to inspire people. His probity, understanding of security issues and ability to resolve complex defence problems is well known. It is hoped that prime minister will give the ministry of defence and consequently the defence forces a suitable minister.