Do joint exercises like Garuda or Varuna contribute to improving interoperability between the Indian and French armed forces?

The Varuna and Garuda exercises, involving our respective Navies and Air Forces, are major manoeuvres that enable us to develop and implement new tactics, which can be directly used, for instance, to fight piracy.

Pakistan is an essential partner for fighting terrorism. Our dialogue with that country, including in the military sphere, has but a single goal: reinforcement of Pakistani military capabilities for fighting radical extremists.

These joint manoeuvres are also internationally recognised for their high standards and stir much interest, as reflected in the participation of the Singaporean Air Force in the Garuda exercise held in France, in June 2010.

How can the Indo-French strategic partnership be improved with regard to defence?

The President of the French Republic has emphasized on several occasions the Indo-French strategic partnership contributes to stability and peace not only at the regional but also at the global level. 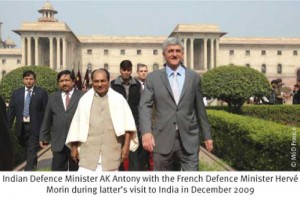 As I had the opportunity to convey to the Hon’ble Minister of Defence, Shri AK Antony, during my visit in December 2009, we can go even farther in enhancing our consultations on the regional situation – I am specifically referring to Afghanistan, where France is engaged – but also on major international issues. We could also intensify our cooperation at the theatres of operation where both our armed forces are deployed, piracy in the Indian Ocean and the Gulf of Aden being such a case. Lastly, we could develop more armament programmes that are efficient and adapted to the needs of both armed forces.

Can one envisage France and India collaborating on a major joint project on research, development and production? India, for instance, already has such a project with Russia for a fifth generation fighter plane.

The Indo-French relation is one of trust. Therefore, France is fully ready to undertake major cooperation projects on armament with India.

There already are two joint development projects: the Maitri missile project between the DRDO and MBDA, and the Kaveri engine that is to be jointly developed by the DRDO and SNECMA.

We must together explore other possible areas for applying this renewed cooperation, accompanied by real transfers of technology.

What is your government’s policy on the sale of armament to Pakistan?

Pakistan is an essential partner for fighting terrorism. Our dialogue with that country, including in the military sphere, has but a single goal: reinforcement of Pakistani military capabilities for fighting radical extremists.

How do you asses the evolving situation in Afghanistan?

The objective of our engagement in Afghanistan has been to fight against terrorism and ensure the stability of that country, which is essential for the security of the entire region. At the request of the Afghan government and in the framework of United Nations resolutions, we have maintained a military presence since 2001, the priority being the training of the new Afghan Army and Police. With almost 4000 men deployed on the field, we are fully assuming our share of the responsibility. As reiterated by President Nicolas Sarkozy on several occasions, we will stand by the Afghan people for as long as is required.

Like all other countries participating in the ISAF, India constantly faces terrorist threats. For all these reasons, we attach especial importance to our dialogue with the Indian authorities on the situation in Afghanistan.

The presidential elections, and recently, the legislative polls, mark an important phase of the democratic process in this country, and we welcome the mobilisation and courage displayed by the Afghan people under particularly violent and tough conditions. With the support of the international community, the new Afghan authorities must henceforth formulate and implement a programme capable of meeting all the challenges that this country faces: security, governance, development. All the efforts of the international community must contribute towards helping the Afghans take charge of their own destiny, particularly with regard to security.

What role do you envision for India in Afghanistan?

France considers that the regional aspect constitutes an important factor for the settlement of the Afghan crisis. For historical, geographical and strategic reasons, India is a major player in the region. It therefore, unquestionably, has an important role to play. Its contribution to Afghanistan’s reconstruction has, moreover, been welcomed by the international community as it brings direct benefits to Afghanistan’s economic development, the well-being of the local people and the consolidation of the rule of law.

Further, like all other countries participating in the ISAF, India constantly faces terrorist threats.

For all these reasons, we attach especial importance to our dialogue with the Indian authorities on the situation in Afghanistan.

How do you envision the future of the French armed forces?

About ten years ago, we undertook unprecedented military reforms through professionalism and ending drafting. These reforms were indispensable, given the change in the missions assigned to our armed forces, which are essentially engaged in foreign theatres and peacekeeping operations.

Today, the threats still remain, as we see in Afghanistan, off the Coast of Somalia and the Sahel region. Hence, France continues to give priority to defence investments.

But given the budgetary constraints, France endeavours to optimise its defence resources. Thus, we are pursuing our modernisation policy with a view to better management and making our military mechanisms more appropriate for the ground realities of our foreign engagements, particularly through greater efforts with regard to equipment.

As far as deterrence is concerned, we maintain a “strictly sufficient” arsenal, at the lowest level possible for preserving credibility, and which has been ensuring us peace since almost half a century.