The second part of the speech is consecrated to disarmament. It is probably the most detailed account by a French President 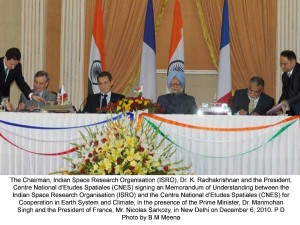 The statement made by Rajiv Gandhi in the UN in June 1988, received little echo outside India. In the French Press, I only found a small article of 91 words”¦

Sarkozy ended his speech by these words: “I guarantee you: France will not lower its guard”.

Though there is no real debate, many in France, including two former French Prime Ministers, Michel Rocard and Alain Juppé are advocating a review of the use of nuclear weapons by the French State. But it may not happen in a near future. President Sarkozy made an important point in Cherbourg, the question of reciprocity.

The statement made by Rajiv Gandhi in the UN in June 1988, received little echo outside India. In the French Press, I only found a small article of 91 words mentioning Rajiv Gandhi’s announcement in the French daily Le Monde.21

On June 11, 1988 Le Monde just said: “Indian plan for disarmament: on June 9, India has presented a plan for global disarmament at the UN. The Indian PM, Rajiv Gandhi made this proposal during the Third Session of the General Assembly on Disarmament. The Indian plan, whose objective is to replace the NPT which expires in 1995, proposes that all nations commit themselves to step by step [disarmament], eliminate all the nuclear weapons not later than 2010 and start talks at the UN for negotiating a global security plan.”

“¦policy-makers dont take decisions in the realm of war and peace, armament and disarmament, because of a plan agreed in a diplomatic conference. They do it because it is in their countrys national security interest”¦

A few days earlier, Le Monde had reported the Third Summit of the Group of Six created in 1984 “to promote disarmament and peace and stop the global suicide”. The participants were the Mexican President Miguel de la Madrid; the Greek PM, Andréas Papandréou; the former Tanzanian Head of the State, Julius Nyerere; the Indian PM, Rajiv Gandhi; the Swedish PM, Ingvar Carlsson and the Argentinean Foreign Minister, Dante Caputo. The Summit proposed to use the summit to “support efforts displayed by Superpowers to reach disarmament”. The Group of Six adopted a ‘Stockholm Declaration’, asking for a ban on nuclear tests. They even renewed their proposal to survey and monitor a ban on atomic experiments. The French newspaper commented: “These initiatives of the six nations received a mixed welcome; the composition of the group is rather surprising, India, for example, has not signed the Treaty of Non-Proliferation of 1968”

On July 11, 1988, the Russian Information Agency ITAR-TASS quoted Rajiv Gandhi from an interview with Tanjug, the Yugoslav News Agency: “The signing of the Soviet-American Treaty on the elimination of intermediate-range and shorter-range missiles has been a positive step toward curbing arm race.”

Prime Minister Rajiv Gandhi added: “It is only when the nuclear powers and other countries contribute to the process of disarmament and complete elimination of nuclear armaments that the international climate can be cardinally altered.”

On November 10, talks were held between Mikhail Gorbachev, General Secretary of the CPSU Central Committee22 and Rajiv Gandhi.

BBC Summary of World Broadcasts said that while greeting his guest, Rajiv Gandhi “stressed the fact that Mikhail Gorbachev was making his first trip abroad as the Soviet head of state, to friendly India.”

Rajiv Gandhi spoke of the significance of conferring the Indira Gandhi International Prize for Peace and Disarmament to the Soviet leader: “The presentation to Mikhail Gorbachev on Indira Gandhi’s birthday of the prize bearing her name is recognition by the world public of his major contribution to the cause of real disarmament and the creation of a nuclear-free and non-violent world.” 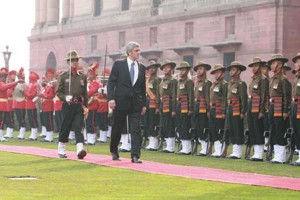 Rajiv Gandhi while presenting the Prize to General Secretary Gorbachev said: “In honouring you, we honour also the memory of Indira Gandhi, a great architect of our friendship, a statesperson without fear, whose contribution to peace, disarmament and development is first of the contemporary history of human kind.”In his reply, Gorbachev mentioned Rajiv Gandhi’s speech at the UN: “We hope to move hand in hand with the developing countries towards establishing a global system of political and economic security. To us the North-South and the East-South problems merge into a task for all mankind. We value the fact that on these issues, too, our outlook is similar to India’s views. The plan of action presented by Prime Minister Gandhi to the UN last summer is consistent with our long term objectives [applause]. Specifically, we support the idea of an international convention to outlaw the threat of the use of nuclear weapons.”

In February 1989, French President Francois Mitterrand visited India. During his first meeting with Rajiv Gandhi, the leaders discussed the setting of two nuclear plants (Le Monde added that it was not an easy deal for France due to the Soviet concurrence). Most of the discussions were centered on the South-North dialogue, Rajiv Gandhi pointing out that the West suffered from ‘dramatic myopia’ and India’s objective was to avoid an explosive situation, which could be comparable to the one in which France was two centuries ago and which led to the French Revolution”.

President Mitterrand answered the Prime Minister’s concerns during the official banquet offered by President R. Venkataraman. He reaffirmed his will in favour of nuclear, chemical and conventional disarmament, but he clarified: “But it is as crucial for the future to break the vicious circle of misery, hunger, diseases, illiteracy, as to curb the armament race”, adding that “the international community seems, in a fit of wisdom, to refuse the fatality of war. As an emergency, it should at least remedy the economic imbalance, which if not mastered in time, will precipitate incurable disorders.”

He was not ready to speak further on disarmament.

To conclude I would like to quote some interesting remarks made by Pierre Sellal, French Foreign Secretary23 at the ‘Global Zero’ Conference on February 2, 2010 in Paris.

Sellal said: “One lesson which can be drawn from History is that policy-makers don’t take decisions in the realm of war and peace, armament and disarmament, because of a plan agreed in a diplomatic conference. They do it because it is in their country’s national security interest, and because the strategic, regional and internal context allows for it.

“The elimination of nuclear weapons will not be decided to fulfil visions, however generous, ambitious and necessary they are; it will happen when political and security conditions enable it to happen.”

“This reality was recently reaffirmed by the Security Council in resolution 1887: our common goal is to work towards a safer world, and to create the conditions which will make nuclear weapons less, and ultimately un-necessary.”

“This does not mean that we should condone inaction. On the contrary, France has taken unprecedented unilateral measures regarding nuclear disarmament, and we believe that likewise concrete progress by all States will enhance international security and ours.”

“So, what shall we do in the upcoming years, not in a distant future, to create collectively the conditions which will allow for the eventual elimination of nuclear weapons, in accordance with Article VI of the NPT? And how do we make sure that this world will guarantee peace and stability, without leading to an arms race in bio-chemical or conventional weapons?”

These are some relevant questions which, according to the French government, have to be answered.

This article was presented as Paper
at Pondicherry Central University in March 2010.

22.   And Chairman of the Presidium of the USSR Supreme Soviet.

23.   His official designation is Director General of the Ministry of External Affairs.