People are ‘reproducible’ the Great Helmsman is said to have stated.

That day, Nehru understood that India and China were not brothers, though Mao was at his charming best, when Nehru left Beijing. Diplomat, VV Paranjpe, who was interpreter in the Indian Embassy in Beijing remembered how Mao enthralled his guest. It was probably to ‘balance’ the discussion on the atomic bomb: “My most unforgettable memory of Mao was when he bade goodbye to Pandit Nehru. We were in Zhongnanhai at Mao’s place. It was late in the evening, and the moon had come out. Mao escorted Nehru all the way to his car. While shaking Nehru’s hand, he suddenly came out with two lines from the Chinese classical poet, Qu Yuan. Mao said:

“¦ in February 1960 when France conducted its first nuclear test in Reggane in the Algerian Sahara (it was followed by 209 other tests which ended in 1996 only).

“There is no greater sorrow than the sorrow of departing alive.

There is no greater joy than the joy of first meeting.”

Was this incident on Rajiv’s mind when he presented his plan for total disarmament during the General Assembly of the UN in 1988? We will probably never know.

The Following Years in France

During the following years, under successive presidents du conseil (Prime Ministers)17, new institutions were created for the research, logistic of tests and other aspects of the nuclear defence policy18.

The arrival of General de Gaulle to power in 1958 greatly boosted the program which became one of the first priorities of the French government. More than anybody else, he had ‘a certain idea’ of the role of France in the world. The nuclear doctrine became known as the ‘force de frappe’ (striking force) or ‘force de dissuasion’ (deterrent force). The idea was that possessing nuclear weapons would be a deterrence, ‘preventing war’ without making it.

“The nation has not forgotten them and will never forget them” “” President Sarkozy speaking about 11 technicians and engineers who were killed in a “˜terrorist attack in Karachi in May 2002.

De Gaulle could probably appreciate India’s policy: to not align itself with any block and not depend on anybody for its defence.

The ‘force de frappe’ took a concrete shape in February 1960 when France conducted its first nuclear test in Reggane in the Algerian Sahara (it was followed by 209 other tests which ended in 1996 only).

De Gaulle wanted France to be independent even from allies, including (or primarily) the United States. However the bomb was clearly aimed at the Soviet Union. In an official note on December 16, 1961, the General fixed the objectives of the ‘force de frappe’: “to inflict on Soviet Union a noticeable reduction (of at least 50 percent) of its economic function”.

From the beginning of the Fifth Republic till today, there has been a wide consensus on defence issues in France, particularly on the ‘force de frappe’. Even the Socialists under Mitterrand rallied to the necessity of a policy of deterrence; the Communists, though proponents of total nuclear disarmament did not oppose it.

President Valéry Giscard d’Estaing19 is said to have issued a similar note to the armed forces: “destruction of 40 percent of the economic capacity of Soviet Union and disorganization of the management powers of the country.”

The world still lived in the midst of the Cold War.

Though new threats appeared, the same doctrine was retained. 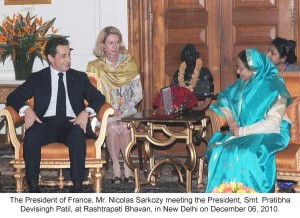 Bruno Tertrais, a French scholar specialized in nuclear matters rightly explains: “the country still sees its nuclear arsenal as an essential element of its security and defense policies. To a large extent, the original rationales for the French nuclear program are still considered valid. From the French point of view, potential strategic threats to European security have not disappeared, and the U.S. guarantee through NATO is not seen as more credible than in the past. …The underlying idea that nuclear weapons make a nation free and independent still exists in the national strategic culture.When it comes to foreign policy, France’s nuclear status seems always to be present in the back of the minds of any president, prime minister, or foreign minister.”

On January 19, 2006, President Jacques Chirac, while visiting the nuclear submarines base in Île-Longue, reiterated the French position: ‘‘In light of the concerns of the present and the uncertainties of the future, nuclear deterrence remains the fundamental guarantee of our security. It also gives us, wherever the pressures may come from, the power to be the masters of our actions, of our policy, of the enduring character of our democratic values.’’

President Jacques Chirac however added an element: the “force de frappe” could be used against the leadership of States that use terrorism against France as well as those that envisage using weapons of mass destruction.

It was an extension of the scope of the ‘force de frappe’.

Further, Chirac added to the vital interests of the French nation, ‘the interests of nations allied to France’, making a first step towards a common European policy in nuclear matters.

A commentator wrote: “French President Jacques Chirac last week announced a shift in the country’s nuclear deterrence doctrine, enlarging the concept of ‘vital interests’ that French nuclear weapons are designed to protect areas potentially far beyond French borders. He also indicated that nuclear arms might be used in more focused attacks and not only for total destruction. He also said France’s ‘force de frappe’ could be used against states that were ‘considering’ deploying weapons of mass destruction.”20