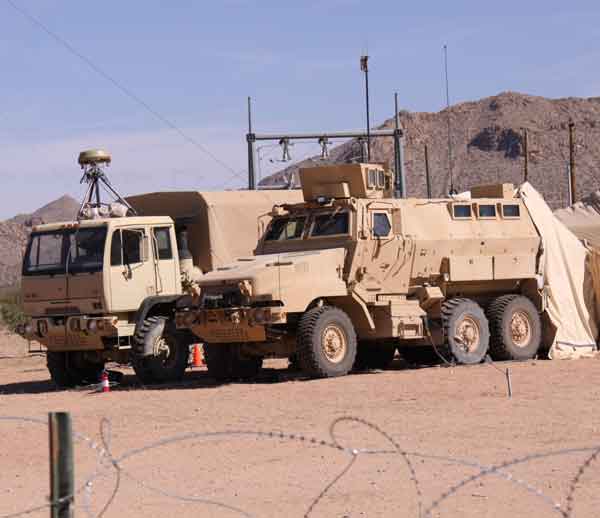 Prototype Company Command Posts included in Network Integration Evaluation 12.1. In the foreground is the Caiman MRAP version with its tent deployed. (US Army/Claire Schwerin)

Command and control (C2) of military forces differs according to the environment in which they operate – ground, maritime or air – but in all cases it is fundamentally about the coordination and synchronisation of activity to achieve objectives. A constant theme in ground force command and control (C2) over the last few years has been what could be described as “technological devolution”, the provision of better connectivity, C2 systems, information and decision support to lower tactical levels: the battalion headquarters (HQ) down to the individual soldier, sometimes known as “disadvantaged users” at the “tactical edge”. These are the organisations and the commanders who are involved in the immediate battle but who historically have had restricted access to information through a combination of technical limitations and doctrine. Things now get done at company level that once were the preserve of battalion HQ, and the same is true of battalions instead of brigades.

This feature looks at some of the developments intended to improve the lot of those disadvantaged commanders at the tactical edge, and concentrates mainly on developments in the US Army.

Having access to this sort of resource is increasingly viewed as being critical to mission success. So to conduct operations successfully the headquarters must therefore have such access, but this requires a greater level of connectivity, architecture and organisational structure…

This technological devolution has been driven by a number of factors, both technical and environmental. Operations in Iraq and Afghanistan, notably the latter, have been characterised by the deployment of forces into fortified, dispersed locations close to the local population, separated from each other and from their superior headquarters by difficult terrain which makes terrestrial communications tenuous or non-existent. Many of these Forward Operating Bases (FOB) are garrisoned at company level and from them operations are now planned, mounted and controlled.

Intelligence, Surveillance and Reconnaissance (ISR) resources and data is now available on a range and scale and to an audience that would have been unthinkable only a few years ago, providing that audience has sufficient connectivity, particularly bandwidth, and a suitable means of handling and displaying the data. For example, real time Full Motion Video (FMV) from a variety of platforms, some under the direct control of forward troops, is now commonplace.  Having access to this sort of resource is increasingly viewed as being critical to mission success. So to conduct operations successfully the company headquarters must therefore have such access, but this requires a greater level of connectivity, architecture and organisational structure than a company HQ has historically been equipped.

Within the US Army this is a logical, although not linear, development of the efforts to provide this sort of access to battalion headquarters which resulted in what was originally known as the Joint Network Node (JNN) and subsequently became the Warfighter Information Net–Tactical (WIN-T) Increment 1. This gave battalion headquarters trailer-mounted Ku-band, subsequently upgraded to Ka-band, satellite communications (SATCOM) capability while halted, giving internet infrastructure connectivity and access to the Secure Internet Protocol Router/Non-secure Internet Protocol Router (SIPR/NIPR) nets as well as freedom from the restriction of line of sight (LOS) communications. 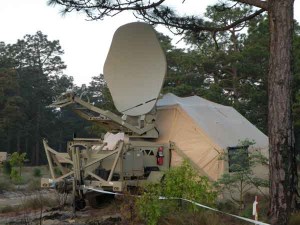 WIN-T Increment 2 is due to extend the network to company level, as well as providing this as an on-the-move (OTM) capability, with fielding starting in 2013 if all goes according to plan. As originally conceived this was to be an entirely vehicle-borne programme, with the smallest vehicle installations being the High Mobility Multipurpose Wheeled Vehicle (HMMWV)-borne Point-of-Presence (POP) and the Soldier Network Extension (SNE). The latter provides a SATCOM capability in the company commander’s vehicle and a combat net radio (CNR) extension box, which enables isolated CNR networks to be linked into the SATCOM network, thus overcoming the difficulties caused by dispersal and over-extended ranges.

While designed for mobile operations, this is less appropriate for dismounted operations, particularly those in rough terrain where the principal means of mobility support is from helicopters. Although not part of the official WIN-T Programme of Record (POR) there remains an objective requirement for a manportable capability. As a result, the joint prime contractor, General Dynamics C4 Systems (GDC4S), began to develop as a private venture a manportable version originally called the Dismounted SNE (DSNE) which it first displayed at the Association of the US Army (AUSA) Annual Exposition in October 2009.

This was contained in three transit cases, provided NIPR/SIPR, the voice Defense Information System Network (DISN) and was Joint Worldwide Intelligence Communications System (JWICS) capable. In that configuration SATCOM connectivity was provided by the GDC4S Warrior Small Manportable Terminal (SMT) Ku-band terminal. This has a total weight of 88 lbs and can either be packaged as a single transit case or two manpacks; it has a nine-piece carbon-fibre.96 metre dish and can be set up in under five minutes. 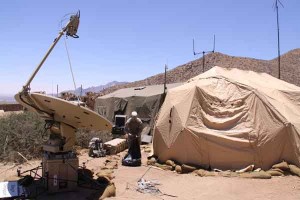 By the equivalent event in 2010 GDC4S had reduced the overall weight of the DSNE to around 240lbs, mainly through the refinement of the power supply arrangements by using lithium/manganese polymer batteries and was providing operational demonstrations. By October 2011 the equipment had been further refined and reduced to a single transit case weighing 66lbs, providing a communications-agnostic network access point. This contains Cisco and Juniper routers, a 16-port managed Ethernet switch and an embedded power supply.  Its modular design enables specific routers to be selected according to particular mission requirements and work continues to redesign the router arrangement to reduce the weight further.

Although it has been given the generic title of the Dismounted Communications Package – Enhanced, acknowledgement of its specific application to the dismounted company HQ as GDC4S was displaying it as the Dismounted Company Command Post (DCCP). GDC4S has submitted the equipment  for inclusion in the US Army’s Network Integration Evaluation (NIE) 12.2 event, which will take place in May 2012. Coincidentally this will also constitute the formal Initial Operational Test & Evaluation (IOT&E) for WIN-T Incr 2.

However, the reality of operations required a solution in the short term, which resulted in the development of to the SIPR/NIPR Access Point (SNAP) in response to a Joint Operational Needs Statement. First fielded in 2009, the SNAP installations are contained in 8-9 transit cases and includes a Very Small Aperture Terminal (VSAT) from TeleCommunications Systems. It has a 2m auto-acquire Ku-band dish for use on commercial satellites and Ka- and X-band options which are certified for use on military satellites. The system provides isolated and dispersed US locations access to the SIPR and NIPR netsworks, and in Afghanistan access to the coalition CENTRIXS-ISAF network.

While connectivity and communications capacity is one issue for the disadvantaged user, another is the ability to get access to C2 applications which are regularly used by those in higher headquarters and with better communications, which are often stovepiped and not integrated.

Over 600 SNAP installations had been fielded by late 2011, when they were in use by the US Army in Afghanistan and the US Marines Corps (USMC) in the Horn of Africa, with more fieldings a possibility in 2012. The SNAP installations have provided an interim solution to the requirement that will eventually be met by WIN-T Incr 2, although it is more than likely they will remain in use for some time after the latter’s introduction into service.

GDC4S has also reduced the size and weight footprint of the WIN-T Tactical Communications Node (TCN) to make it more compatible with a rapidly moving battalion HQ, as the current POR solution is mounted on a six-wheeled truck. The TCN provides SATCOM, LOS and Wide/Local Area Networking capabilities at the battalion level. GDC4S reduced this to a twin HMMWV-carried configuration and offered it to the WIN-T programme as the TCN-Lite.

By late 2011 the construction of two prototype TCN-Lite had been incorporated as a WIN-T Incr 3 development task, to be evaluated as an adjunct to the Incr 2 IOT&E during NIE 12.2. If all goes well an Engineering Change Proposal (ECP) will be submitted to incorporate the TCN-Lite into the Increment 2 production baseline in the future. The TCN-L will most likely be mounted on an up-armoured HMMWV.

The need to provide the company headquarters with improved connectivity, better facilities and a structure more appropriate to the tasks it now has to undertake has led to the formal identification of a capability gap and an emerging formal US Army programme for an integrated company command post (CP), as there is currently no Programme of Record. This is also part of the “Mission Command on the Move” (MCOTM) initiative which meets a longstanding requirement to provide a comprehensive C2 capability for commanders when moving and an evolution of the Mounted Battle Command on the Move (MBCOTM) programme, cancelled in mid-2008 although the requirement remains extant.

The provision of integrated facilities at company level is a logical development of the Standardized Integrated Command Post Systems (SICPS) programme, which provides an integrated solution at brigade and battalion level and has been fielded since mid-2005. This is largely based on the Northrop Grumman Command Post Platform (CPP), a rigid-walled shelter mounted on an armoured HMMWV, or the CPP-Light, which is also based on the HMMWV but consists of reconfigurable and dismountable Modular Equipment Packages (MEP) and radio racks containing the communications, routing and network equipment.

On the structural side this might include, for example, provision for permanently established posts responsible for combat support roles such as fires and ISR, as opposed to temporarily attached personnel, but the main thrust of the work is to provide a company CP solution which will provide the necessary integrated facilities. There is a degree of urgency in the work as there is a requirement to field company CPs in eight Infantry Brigade Combat Teams (BCT) during Fiscal Year 2013.

The company CP solution must meet a number of directed requirements: transmit and receive voice, data and imagery by LOS and BLOS; automatically transmit own position location information (PLI) and receive and display auto transmitted friendly PLI; collaborate via voice, chat, and whiteboard with higher, adjacent and subordinate units; display and manipulate the Common Operational Picture (COP); have access to unclassified, classified and coalition networks; conduct all source intelligence analysis and operations; and plan and execute fires.