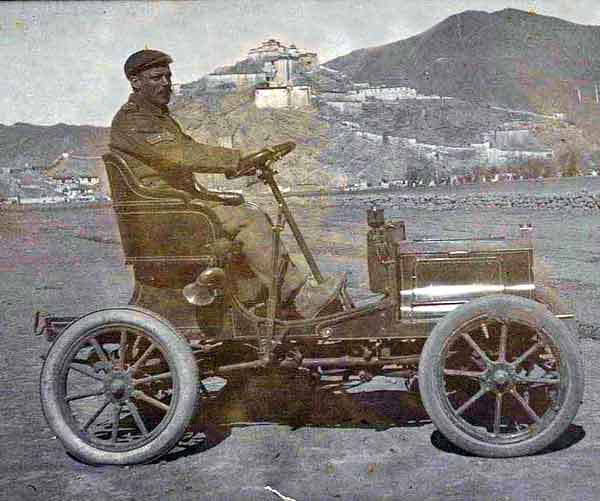 Capt O'Connor in his Peugeot at Gyantse, 1907

When a friend who was in Lhasa recently, mentioned of the wide range of cars available on rental, my memory at once shifted focus upon Lieutenant Fredrick Travers O’Connor who on 14 November 1906, had assembled together the first car at Phari Dzong, about 12,500ft ASL (Chumbi Valley, Tibet) and drove North a 180 Km to his residence at Gyantse, on the track to Lhasa. I believe he covered that distance in three days because (a) the unpaved surface and mean altitude of 13,000 ft ASL restricted speed between 5 to 10 Kmph, and (b) petrol and lubricant replenishments were carried on Yaks, at Yak speed!

Some time in mid 1906, O’Connor was granted four months “Home Leave” when he chanced upon and acquired two of the recently marketed, Peugeot cars.

Now who was O’Connor and why was he in Tibet? That fascinating story begins in 1895 when this Subaltern was commissioned into the Royal Artillery, and posted to the 7 British Mountain Battery at Lebong, an Army Cantonment, on the out-skirts of Darjeeling. Their officers were billeted in a bungalow, perched the highest on the Darjeeling spur (still intact, and since the 1960s the MES Inspection Bungalow, Jala Pahar!) and O’Connor wrote to his mother of the view from his eyrie: “From the moment of my arrival at Darjeeling and the first view of snows, I became obsessed and fascinated with the romance and beauty of the whole of this frontier*…..” And O’Connor made up his mind to master Nepalese and Tibetan dialects, as a prelude to exploring what lay beyond the snowy frontier. And indeed in 1903, O’Connor emerged as the lone qualified, interpreter of Tibetan dialect in the Army!

This was the time when the Viceroy, Lord Curzon had made two unsuccessful attempts to reach out to the Dalai Lama with offers of a Diplomatic alliance. Stung by the rebuff, Curzon ratcheted the “Great Game” with military invasion, in 1903, cloaked euphemistically as the Trade Mission to Lhasa! O’Connor was chosen both to command the Section of Mountain Guns accompanying the Mission but primarily as the interpreter on the year-long exploits, in the land of his dreams! As fortune favours the enterprising ones, O’Connor was retained in Tibet on termination of the Mission, to Head the British Trade Agency at Gyantse, with a subsidiary at Shigatse, the seat of the Panchen Lama. Interestingly, the Gyantse establishment was guarded by one Platoon of Pathan soldiers, commanded by Lieut Auchinleck; the future Field Marshal Sir Claude Auchinleck, the last British Commander-in-Chief, India!** 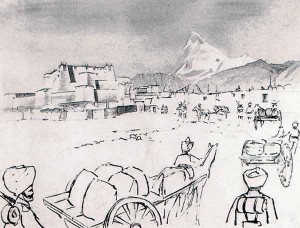 Some time in mid 1906, O’Connor was granted four months “Home Leave” when he chanced upon and acquired two of the recently marketed, Peugeot cars. As road connectivity to Gyantse terminated in Sikkim at Jelap-La, the cars simply had to be dismantled into convenient loads, each to be slung from sturdy bamboo-poles and carried by four/eight men, in relays up to Phari Dzong. Here, the knocked down pieces were reassembled in to a functional car by O’Connor, who simply had to be the bravest of the brave to have ventured on that phenomenal project. From Phari Zong to Gyantse there was a semblance of a gravel track, over which the Peugeot was driven. Capt FM Bailey of the 32nd Sikh Pioneers who was an eye witness of the Peugeot’s arrival at Gyantse wrote, “Then on Friday the 14th November there was the unaccustomed roar of engines: O’Connor had returned with a 6.5 h.p. motor-car which he had acquired for himself, and a larger model for the Tashi Lama. These were the first motor-cars ever to enter Tibet, and the story of how O’Connor got them over the mountains was an epic of courage and ingenuity….”** The Hermit Kingdom did not have a single road or a bridge till the 1950s. So, O’Connor usually amused himself giving joy rides to his Tibetan friends, around Gyantse. On account of the rarefied atmosphere, the carburetor seldom fed the required fuel-mixture so the engine stalled often, and the car would be harnessed to four horses, and pulled home!

The age of automobiles truly dawned in Tibet in mid 1920 when Sir Charles Bell the British Political Agent for Tibet presented to the 13th Dalai Lama, a Blue colored Baby Austen…

What about the second Peugeot? Well, it was a gift for his dear friend, the Panchan Lama, at Shigatse. O’Connor had also taught him the English language and introduced him to Western music which the Lama just could not have enough of!** Their friendship unfortunately fuelled a vicious rumor of British perfidy, of encouraging the Panchan Lama to take over all territory South of the River Tsangpo and proclaim himself the King of a State larger than Nepal, Sikkim and Bhutan, put together! How I wish that were true as that would have kept the PLA at an arm’s length today, from these Himalayan States.

The age of automobiles truly dawned in Tibet in mid 1920 when Sir Charles Bell the British Political Agent for Tibet presented to the 13th Dalai Lama, a Blue colored Baby Austen, A-40 which carried the licence-plate TIBET 1!@ Two years on, a resident of Lhasa (named Kumphela?) would send for a similar Austen which bore the licence-plate TIBET 2. But in all fairness it must be stated that the credit for the first wheels per se over  Tibetan Soil, belonged to Brigadier James Macdonald who had had light mule-carts, with wooden wheels fabricated at Siliguri, reassembled at Yatung (Chumbi Valley) and were plied as load-carriers up to Gyantse, starting March 1904.*

O’Connor retired from the Political Department after a distinguished career as Lieutenant Colonel Sir Fredrick Trevors O’Connor, C.S.I., C.I.E., C.V.O. The remains of one of his Peugeots were last seen in the back-yard of a Lahsa home, in the 1950s. The Dalai Lama’s Austen (TIBET 1) was last seen in 1958, parked under the portico of Norbulingka, the Summer Palace, at Lahasa. It is rather surprising that the Auto-Makers Peugeot and Austen should have no record of their history-making cars, the first upon The Roof of The World! Today, the Lahsa Car Rental Company boasts of 122 cars (Sedans, SUVs, Jeeps, Luxury Vans, etc) and Tibet has over 20,000 privately owned cars in addition to the lot with the PLA. Good bye to SHANGRI-LA.

**“Beyond The Frontiers: A Biography of Colonel F M Bailey”, by Arthur Swinson, 1971.

One thought on “First Wheels in Tibet”