The Indian Ocean is the third largest body of water on the globe, covering 20% of the earth’s surface. They are the waters of wealth as well as conflict, depending on who can exploit it for their ends. There’s a very good reason why that body of water is called the “Indian” Ocean. The Indian peninsula juts 1,980 kilometres into the Indian Ocean. 50% of the Indian Ocean basin lies within a 1,500 kilometre radius of India, a reality that has strategic implications. The area between the Gulf of Aden and Malacca Strait is seen as India’s sphere of influence. India is one of six countries in the world to have developed the technology to extract minerals from the deep sea bed. 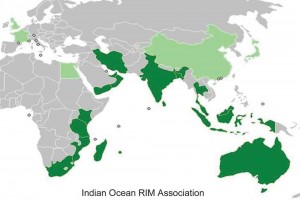 Under the law of the sea, by adding up the sea waterways comprising territorial zone of 20 kilometres, contiguous zone of 40 kilometres, an exclusive economic zone (EEZ) of 320 kilometres, India has exclusive rights to explore mineral wealth in an area of 150,000 square kilometres in the Indian Ocean. The oceans are recognised as a repository of treasure and this add-on area gives India sovereign rights over all living and non-living resources with regard to activities for the economic exploitation and exploration of the sea. India has the status of pioneer investor in this region.

A look at the countries on the Indian Ocean littoral will give an adequate idea of the size and potential of India as compared to any other country in the region.

The Indian Ocean provides major sea routes connecting the Middle East, Africa and East Asia with Europe and the Americas. It carries a particularly heavy traffic of petroleum and petroleum products from the oilfields of the Persian Gulf and Indonesia. Large reserves of hydrocarbons are being tapped in the offshore areas of Saudi Arabia, Iran, India and Western Australia. An estimated 40% of the world’s offshore oil production comes from the Indian Ocean. Beach sands, rich in heavy minerals, and offshore deposits are actively exploited by bordering countries, particularly India, South Africa, Indonesia, Sri Lanka and Thailand. 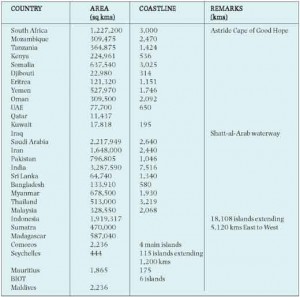 Today, nearly 20 million shipping containers are moving around the globe — carried by fewer than 4,000 hulls. The explosion of transoceanic trade has made commerce more vulnerable, not only in the obvious sense that economies have grown more interdependent, but also because, even as the volume of shipped goods increased, the number of significant cargo carriers has reduced because of the increasing size of commercial vessels, from supertankers to container ships. Far fewer transports ply the seas today than a century ago; the sinking, seizure or blockading of a small portion of the international merchant fleet could bring high-end economies to a standstill.10

The Straits of Malacca, the world’s second busiest sea lane, assume relevance here. 80% of Japan’s oil supplies and 60% of China’s oil supplies are shipped through the Straits of Malacca. US$ 70 billion worth of oil passes through the straits each year. Almost half the world’s containerised traffic passes through this choke point. Most of the ships approach the straits through the 10 degree channel between the Andaman and Nicobar islands. India, thus, has the potential to dominate a strategic sea lane. India has established its first tri-service command, the A&N Command at Port Blair in the Andamans. It plans to develop Port Blair as a strategic international trade centre and build an oil terminal and transhipment port in Campbell Bay in the Nicobar islands.

India has exclusive rights to explore mineral wealth in an area of 150,000 square kilometres in the Indian Ocean.

India is a member of the Antarctic Treaty Parties Consultative Group and has already set up two permanently staffed scientific bases there. It has constructed a 10,000 foot runway in Antarctica to service future missions, having completed several successful landings there.

The Laccadive islands, likewise, offer the possibility of India projecting its power westwards. India is just 800 kilometres away from US military facilities in Oman. Trade with the Gulf States is an important facet of the Indian economy from ancient times.

The conflict-affected Indonesian province of Aceh sits at the tip of Sumatra i.e. the southern entrance of the Straits of Malacca. The Chola empire had an outpost in Aceh in early medieval times while the Portuguese, Dutch and British controlled it thereafter in succession. Aceh has large reserves of natural gas and minerals. The land mark peace accord between Acehnese rebels and Djakarta needs to be viewed in the context of this strategic sea lane.

India is uniquely placed between the two major drug and narcotics producing parts of the world, namely, the Golden Crescent, including Afghanistan, and the Golden Triangle, spanning the regions of northern Thailand, East Myanmar, and West Laos.

With increasing trade relations with the countries of the East, India has higher stakes in the region in the years to come. Trade volumes with the ASEAN countries have more than doubled in a decade. From a mere $1484 million in 1993, the Indian market has emerged as one of the largest importers of South East Asian goods with imports touching $ 10,942 million in 2004.11 The recently concluded Free Trade Agreements with countries like Thailand and Singapore are set to contribute to this trend. Expanding markets and larger import flows imply not only economic prosperity but also vulnerability at sea. The incidence of piracy, armed robbery and maritime terrorism are on the rise and has placed a premium on the complexity of sea-lane defence.

The Indian Ocean is a “vital sea” for India12 and the northern part of which is of immense economic and strategic importance. India’s burgeoning economy entails new markets for import and export. India’s foreign policy orientation towards its eastern neighbours has spurred interest and attention there. India’s burgeoning economy, now forecasted to become one of the three fastest growing economies in the world, entails expansion of existing export and import markets. Being a sea faring nation with island neighbours has added to the need for safe sea-lanes in the inter-lying waters. The world’s busiest choke point in the straits of Malacca located here adds complexity to a strategic factor.