South Asian countries have different forms of government; their democratic institutions are still developing, with a civil society that is still struggling to define its space. The importance of this region is two-fold due to its inter-state rivalries and its intra-state conflicts related to non-traditional human security concerns. The two non-NPT signatory nuclear powers and archrivals – India and Pakistan, have fought wars over territorial claims and political issues. Conventional army deployment and engagement has been frequent. Asymmetric warfare in the form of terrorism is also a harsh reality in the region. Pakistan and its border region with Afghanistan along with emerging terror trails in Bangladesh and even Sri Lanka are hot beds of trans-national terrorism. 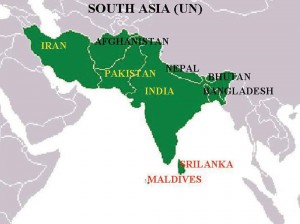 Among the non-traditional security challenges that confront the region are issues of ethnic and religious violence, crises of governance and democracy leading to the Maoist insurgency in Nepal and parts of India, border problems and the issues of illegal migration, poverty, HIV AIDS etc.

Academics, theorists, and practitioners of geopolitics have agreed upon no standard modern definition for “geo-strategy.” While most definitions emphasise the integration of political goals and military strategy, the original definition has been variously expanded to include non-military aspects —diplomacy, economics, etc.

Pakistan and its border region with Afghanistan along with emerging terror trails in Bangladesh and even Sri Lanka are hot beds of trans-national terrorism.

Historically, there have been two schools of thought on geo-strategy: the Anglo-American school, and the German school. Alfred Thayer Mahan and Halford J. Mackinder outlined the American and British conceptions of geo-strategy, respectively, in their works, “The Problem of Asia” and “Heartland”. Mahan is best known for his “Influence of Sea Power upon History” series of books, which argued that naval supremacy was the deciding factor in great power warfare. In 1900, Mahan’s book, The Problem of Asia laid out the first geo-strategy of the modern era. He divided the continent of Asia into three zones:

The “Debated and Debatable” zone, Mahan observed, contained two peninsulas on either end (Asia Minor and Korea), the Isthmus of Suez, the Middle East, two countries marked by mountain ranges (Persia and Afghanistan), the Pamir Mountains, the Tibetan Himalayas, the Yangtze Valley, and Japan. Within this zone, Mahan asserted that there were no strong states capable of withstanding outside influence or capable even of maintaining stability within their own borders. So whereas the political situations to the north and south were relatively stable and determined, the middle remained “debatable and debated ground.” To Mahan, the possession of India by Britain was of key strategic importance, as India was best suited for exerting balancing pressure against Russia in Central Asia. Britain’s predominance in Egypt, China, Australia, and the Cape of Good Hope was also important.

Mahan stated that the two most influential lines of division of the world would be the Suez and Panama canals. As most developed nations and resources lay above the North-South division, politics and commerce north of the two canals would be of much greater importance than those occurring south of the canals. As such, the progress of historical development would flow from east to west, in this case leading toward Asia as the locus of advance. Surprisingly, he never mentioned the Malacca Straits in any of his writings. The US were never concerned with this region till the Second World War, and then too marginally. In the late 1980s, Amartya Sen, the Nobel laureate, found every single book on India in the Harvard bookstore was kept in the section called ‘religions’.1