Till the early 20th century Asia was referred to as one entity – the Orient. Subdivision of its regions changed the nomenclatures to Near East, East (the Indian subcontinent) and the Far East. This continued till the Second World War, when South East Asia came into vogue – to refer to the region under Japanese subjugation and the South East Asia Command was raised by the Allies during the Second World War. Even after the demise of colonialism, the Indian subcontinent continued to be referred as such, till the breakup of the erstwhile Soviet Union, when the Central Asian Republics came into separate entities. Asia then became divided into different sub regions – West Asia, Central Asia, South Asia, East Asia (or the Pacific Rim), North East Asia and South East Asia. The Indian subcontinent and its neighbourhood now need to be seen from a regional geographic perspective in order to outline its strategic importance.

Indias geographic position along the sea lines connecting the Persian Gulf with Asias other growing economies reinforces Indias potential to be a security provider along this crucial route.

South Asia is the southern geopolitical region of the Asian continent comprising territories which geo-physically lie on the Indian Plate (bordered on the north by the Eurasian Plate) and are south of the Himalayas and the Hindu Kush mountain ranges. It is surrounded by (from west to east) Western Asia, Central Asia, Eastern Asia, and South East Asia. Geopolitically, South Asia also includes territories found external to the Indian Plate and in proximity to it. Afghanistan is sometimes grouped in this region due to socio-political ties to Pakistan, and because it was a part of the Indian Maurya and Mughal empires.

Sri Lanka and Maldives. South Asia is the place where West, Central, Southeast, and East Asia meet, and where the dominant cultures of these sub-regions have competed for influence over the centuries. In Samuel Huntington’s terms, the region lies across the fault lines between four major civilisations, those of the Muslims, Hindus, Buddhists, and Confucians.

The region has a long history. Ancient civilisations developed in the Dwarka region and the Indus River Valley. The region was at its most prosperous before the 18th century, when the Mughal Empire held sway. European colonialism led to its expansion in the region, by Portugal and Holland, and later Britain and to a lesser degree France. Most of the region gained independence from Europe by the late 1940s. 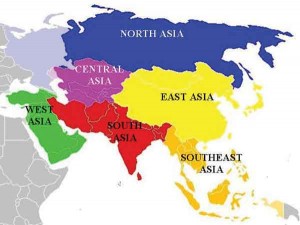 
Persian, Arab and Turkish cultural traditions also form an integral part of Islamic South Asian culture, but have been radically adapted to form a Muslim culture distinct from what is found in the Middle East e.g. the spread of Sufism and pilgrimage to dargahs. About 60% of people in South Asia follow Hinduism and 30% follow Islam. The peoples of the region possess several distinguishing features that set them apart anthropologically from the rest of Asia. The dominant peoples and cultures are Indo-Aryan and Dravidian, with some Mongoloid races, and have a greater affinity with Europe than with most other regions of Asia, excepting the Iranian Plateau and the Caucasus. South Asia comprises an area of 5,130,746 square kilometres and ranks among the world’s most densely-populated regions with about 1.6 billion people — about a quarter of all the people in the world. The region’s population density of 305 persons per square kilometre is more than seven times the world average.